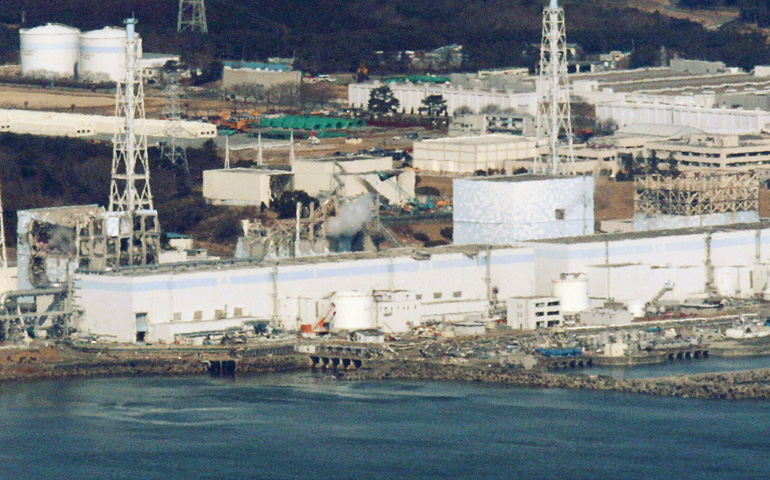 The Catholic bishops of Japan, which is still dealing with health effects from the 2011 meltdown of the Fukushima Daiichi Nuclear Power Plant, have asked Pope Francis to warn against the use of nuclear power in his upcoming encyclical on the environment.

Meeting the pope in Rome last week during their ad limina visit, the Japanese bishops asked that even if Francis did not outright condemn nuclear power, he say it has "very serious problems that threaten life."

"It is possible that he will not mention in very concrete terms nuclear power plants, but he could say that human pride has been doing much damage to the environment and there are some very, very serious problems that threaten life," Koda continued. "In this context, he could mention nuclear power plants."

Koda, who is also the vice president of Caritas Japan, spoke Sunday in a joint NCR interview that also included Tokyo Archbishop Peter Takeo Okada, the president of the Japanese bishops' conference.

Okada and Koda visited with the pope on March 20 with 14 other Japanese bishops during their ad limina, a formal visit bishops around the world are required to make to report to the pope on their individual dioceses.

During the interview -- which lasted about an hour and was conducted in a mixture of English and Japanese with the help of Japanese Mercedarian Sr. Filo Shizue Hirota -- the two prelates talked about the visit, the changes Francis is bringing to the church, and a message the Japanese episcopacy has released on the 70th anniversary of the end of World War II.

Francis is known to be working on an encyclical -- the highest form of teaching for a pope -- that is to address environmental and ecological issues.

The vice director of the Vatican press office, Passionist Fr. Ciro Benedettini, said Monday that the pope had cleared his schedule this week to focus on a "final revision" on the document, which is expected to be published in June or July.

The use of nuclear power has been a subject of debate in Japan since the 2011 meltdown, which occurred fter an earthquake and tsunami off the coast of the city of Sendai, about 220 miles north of Tokyo.

The country's power plants have been shut down since the accident, but Prime Minister Shinzo Abe has said he wants to restart at least one-third of the country's 54 reactors. The Japanese bishops have opposed that plan, saying the Fukushima disaster shows the need to move to renewable energy sources*.

The secretary general of the Japanese bishops' conference, Fr. Ryohei Miyashita, who was also part of the NCR interview, said Francis was "very interested" in hearing the bishops' concerns about nuclear energy.

"He said that civilization could destroy civilization," Miyashita said. "Men and women think that this is very advanced civilization, but actually what has happened is destroying civilization."

"He said that humankind constructs a civilization and because of human pride, humanity goes beyond the limitations," Miyashita said, adding that Francis compared modern society's situation to the story of the Tower of Babel.

"Humankind has to be more humble, listen to the voice of God, and to the simpler life," Okada added.

Speaking of the differences Francis has brought to the church, Okada said this ad limina visit was "very different" than the previous three such visits he has made since becoming Tokyo's archbishop in 2000. Okada said while previous popes preferred to meet a country's bishops one by one, Francis sits together with the whole group at once.

"The atmosphere is quite changed," he said. "The pope wanted to have communication on any issue. You can say anything, any question."

Okada said Francis particularly asked about the status of family life in Japan, asking if the Japanese bishops were dealing with a high number of divorce cases. The pope, the archbishop said, also expressed concern about the low birthrate in Japan, where the population was estimated to shrink by some 268,000 people in 2014.

The pope had a particular concern about how Catholic ministry will continue in the country in the future with the population decline, Okada said, as Catholics are a very small minority of the population. Out of Japan's population of some 127 million, only an estimated 500,000 are Catholic.

In light of the minority of Catholics in the country, the Tokyo archbishop also spoke about how he and other bishops there focus their efforts on interreligious work, especially with the Shinto and Buddhist populations.

"Christians are just a very, very small group," said Okada, saying the bishops "try to have the same aim and to try to resolve the very complex problems" facing their society alongside other religious leaders.

Okada continued: "If we don't really face all these very human problems, including environmental problems, other people might think: 'What are these people doing? They are not really concerned or involved or committed to the very serious problems that will affect all humanity, or the whole universe.' "

"We are too much predominant over nature," he continued. "Pope Francis told us during our ad limina that humankind should obey the good of nature, which God gave us.

The Tokyo archbishop also spoke at length about the message he and his fellow bishops have released for the 70th anniversary of the end of World War II, which the Japanese bishops' conference published in February.

A five-point statement, the message commits the Japanese church to work toward peace -- especially the protection of an article in the post-war Japanese constitution that renounces war and forbids the country's government from maintaining a military.

That article, the ninth in the Japanese constitution, has come under debate in recent years, especially as Abe's government has sought to reinterpret its meaning to allow Japan to enter into collective self-defense treaties with other countries.

"It is a matter of course that we Japanese bishops respect the ideals of Japan's no-war Constitution," reads the bishops' conference's message. "For Christians, the renunciation of war is demanded by the Gospel of Christ. It is a respect for life that cannot be abandoned by religious people and an ideal that is held firmly by the whole human race."

Okada said the prevailing mindset in Japan about the constitution is changing, and there is a new tendency among some people to downplay the atrocities committed by the Japanese armed forces during the war.

"For example, there is some tendency that wants us to renew our history of invasion, colonialism, and relation toward neighboring countries -- they say it is not true," the archbishop said. "There are some people who disagree, and this opinion is becoming bigger and bigger."

"[The Japanese bishops] don't have much power to change the situation," he continued. "But we should say this and we may be able to create something, something new."

Asked about how the Japanese bishops' total renunciation of war fits with the teaching of the Vatican and of other bishops' conferences, which still permit the use of war under the so-called just war criteria, Koda said the Japanese refer back to Pope John XXIII's 1963 encyclical Pacem in Terris.

That encyclical states that in an age of nuclear weapons, "it no longer makes sense to maintain that war is a fit instrument with which to repair the violation of justice."

Koda also referred to the Second Vatican Council document Gaudium et Spes and Pope John Paul II's remarks during his visit to Hiroshima in 1981*, when he said, "Clashes of ideologies, aspirations and needs can and must be settled and resolved by means other than war and violence."

Asked particularly about how the Japanese church might advise church diplomats considering the use of force in the Middle East, where the Islamic State group has killed many Christians, Koda said: "There's a situation where dialogue is almost impossible."

"But at the same time, we never think that violence can bring about peace," he continued. "We don't believe it. It's impossible."

*An earlier version of this story contained incorrect information.

A version of this story appeared in the April 10-23, 2015 print issue under the headline: Use of nuclear power debated in Japan.