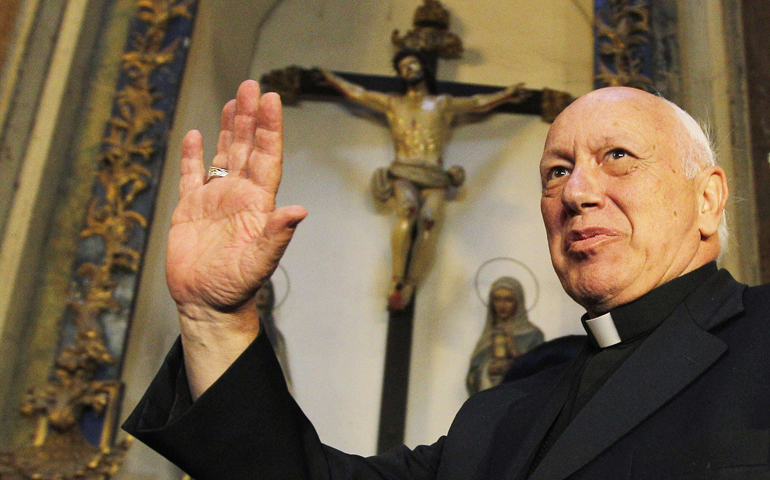 Cardinal-designate Ricardo Ezzati Andrello of Santiago, Chile, said he would serve the church with "humility and simplicity" when he is elevated to cardinal in February.

The cardinal-designate also said although his name had been circulated as a potential candidate, the announcement that he was chosen along with 18 others by Pope Francis was "unexpected."

"I'm the son of a simple family, a small business owner in a rural village. I always remember my origins, and I think this has helped me in much of my life," Ezzati said Jan. 12, according to remarks provided to Catholic News Service by the archdiocese of Santiago.

Pope Francis chose a Chilean church leader whose career has been marked by the same characteristics that defined the pope's own work in South America, a spokesman for the Chilean bishops' conference told Catholic News Service.

Jaime Coiro, director of communications for the conference, said Ezzati, 72, has dedicated his career to working alongside the people, much the way Pope Francis did when he was a bishop in neighboring Argentina.

"We pray for the responsibility entrusted in Archbishop Ezzati, so that in his new position he will help make the Chilean church increasingly similar to the church that Jesus Christ and that Pope Francis want us to build; a church for the poor that his humble and simple," Coiro said in an email to CNS.

He added that Ezzati is man who has "served the people, especially those who are marginalized and excluded."

After he was named a cardinal, his appointment was criticized by advocates for victims of sexual abuses carried out by Fr. Fernando Karadima, who in 2011 was ordered to "retire to a life of prayer and penitence" by the Vatican. After news of the pope's announcement reached Chile, groups representing the victims called Pope Francis' choice for cardinal "lamentable."

Ezzati responded: "One can always welcome criticism. ... I have tried to always be a pastor that's very close and open, a pastor that confronts problems and, naturally, not everyone will like that," he said.

He said his appointment was "a recognition of the Catholic Church in Chile more than me, and for that I am very grateful to the Holy Father," he said. "This is a living church, which is ... learning from its mistakes but also with roles that are full of faith. The designation by the Holy Father is a sign of hope."

Ezzati, a Chilean citizen, was born in Campiglia dei Berici, Italy, in 1942. He moved to Chile in 1959 and joined the Salesians in Quilpue, Chile. He studied philosophy and teaching there before moving to Rome, where he graduated from the Salesian Pontifical University with a degree in theology. He later earned his master's degree in France.

Ezzati considered one of his predecessors, Santiago Cardinal Raul Silva Henriquez, a Salesian and a human rights advocate who died in 1999, a mentor.

He and 18 others will be elevated into the College of Cardinals at a Feb. 22 consistory at the Vatican.