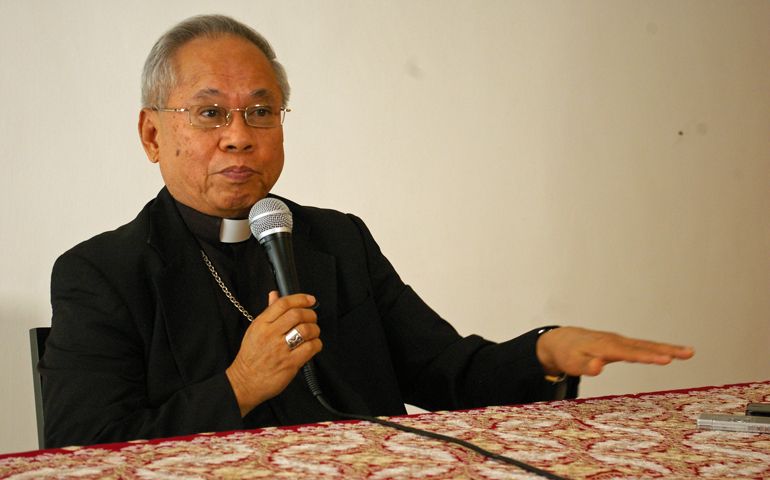 Rome — The Catholic church must fundamentally reorient itself to place its institutions and financial resources at the service of the world's poor, one of the 19 new members of the select and powerful group of church prelates known as the College of Cardinals said.

"The origin of the church is poverty," said Philippine Cardinal Orlando Quevedo. "And the journey of Jesus Christ was the journey with poor people."

"Today, the church has riches, institutions," Quevedo continued. "But I would like to think that the only way the church can redeem these resources as well as its institutions would be to place them at the service of justice and of the poor for the sake of the kingdom of God."

Quevedo, who heads the Philippines' Cotabato archdiocese, was made a cardinal along with 18 other prelates in a ceremony Francis led Saturday. He hosted an hourlong press briefing Friday at the Pontifical Filipino College in Rome.

He spoke of an Asian vision of church built on basic ecclesial communities with a collaborative leadership style.

Asia's vision of church is relevant to the vision of Pope Francis, "who is looking at the periphery rather than at the center," he said.

In the past, cardinals, known for their wearing of red vestments, were sometimes called the "princes of the church" because they usually served either as archbishops in the world's largest dioceses or in the Vatican's central bureaucracy.

But changes big and small seem to be afoot for the group, whose primary role is to gather in secret conclave following the death or resignation of a pope to elect his successor.

Giving a homily during a Mass Sunday with the cardinals at St. Peter's Basilica, Francis pointedly told them they are "not a royal court" and must avoid "intrigue, gossip, cliques, favoritism and preferences."

And like many of the others chosen for the honor by the pontiff, Quevedo comes from an area of the world not previously represented in the elite group. His Cotabato archdiocese, located in the southern Philippine island of Mindanao, is known for struggles with high rates of poverty and near equal populations of Catholics and Muslims (48 and 47 percent, respectively).

Noting that more than 50 percent of the people in his archdiocese live below the poverty line, Quevedo said the idea of the church becoming "a church for the poor" is "not extraneous to the beginning and the core of what the church should be."

"The church is a community of the followers of Christ," the new cardinal said. "And Christ was the poor Christ, Christ who announced the kingdom to poor people, chose poor people to be his first disciples.

"We're not talking about a change of doctrine," Quevedo said. "It's a change of view, a change of whose side is the church on. Is it with the rich and powerful or is it with poor people and the powerless?"

"I think the church should be like that," Quevedo said. "As the poor Christ, so the poor church."

The press event Friday, held about 10 minutes' drive from the Vatican, was understated and rather simple, a sign to the new cardinal's preferences.

Held on the basemement level of the college's main building, there were only four chairs for the three news organizations attending. Nearby, almost in view of the single camera recording the conference, were six suitcases and several trunks, tucked under a staircase for storage.

The new cardinal spoke first of his exepctations for his new role, saying it "is not one of honor, one of privilege, one of power."

Instead, he said, the expectation for a cardinal is "one of great service to people, greater service."

Saying that there are many people in his archdiocese who live in remote mountain areas away from cities, Quevedo said, "When I go to the mountains in the Philippines, the people will not know whether I am cardinal or not."

Quevedo also spoke Friday of the need for the Vatican's central bureaucracy to listen to the different needs of Catholics in different parts of the world.

He referred many times to the idea of the "local church," something he has spoken and written frequently about, particularly while he served from 2005 to 2011 as the secretary general of the Federation of Asian Bishops' Conferences.

The federation, a central gathering space for bishops' conferences throughout the region, was launched following the Second Vatican Council.

"I believe that the vision of a local church, the church in Asia, has is very relevant to the pontificate of Pope Francis, who is looking at the periphery rather than at the center," he said.

Quevedo said the "main pastoral priority" in Cotabato is "the building of basic ecclesial communities in which the idea of forming persons of dialogue is being implemented."

"The idea of leadership that is shared, not just a dictate from above, but collaborative, consultative -- what is called participatory church -- is being built in the basic ecclesial communities," he said.

"It is the grassroots response to the problems of the wider society, which is one sometimes of political dictates, dictating what is important for the people rather than consulting the people."

Mentioning a 1991 plenary council held in the Philippines, Quevedo said that council articulated a new vision of church.

"One of a participatory church, a church of the poor, an enculturated church, and a church of authentic disciples -- true followers of Christ, not only in name but in deed," he said.

"If you translate that vision of church into the whole world, that's the vision really, I think, that Pope Francis is following: a humble church of the poor, a simple church, a church that is consultative."

As for what Quevedo will do after he returns to the Philippines on Monday, the new cardinal said when he arrives home, "the work begins."

"I have a schedule ... when I go home to have confirmation in the mountains," he said. "Maybe the only sign I will show them that I am a cardinal will be to wear a white cassock with different buttons, but they won't be able to recognize that."

"As long as you are there, they'll be happy," Quevedo continued. "Back to work."

Does the cardinal have any specific ideas for how the church can reorient itself to the poor?

"But I said also a radical change in the use of institutions," he continued. "Just that one part alone, change of mind and change of heart is formidable. It's a formidable challenge."

"But the idea of a church of the poor is a theological point of view. It is turning its center of gravity toward the poor, to be in solidarity with the poor. And it is really difficult, often, for priests, clergy and bishops -- and a whole institution, like a school -- to be facing the poor rather than facing stability, progress, that sort of thing. When you face the poor, you have to be ready for insecurity because being with the poor makes you poor."

Quevedo: Francis', Asian church's definitions of dialogue are the same