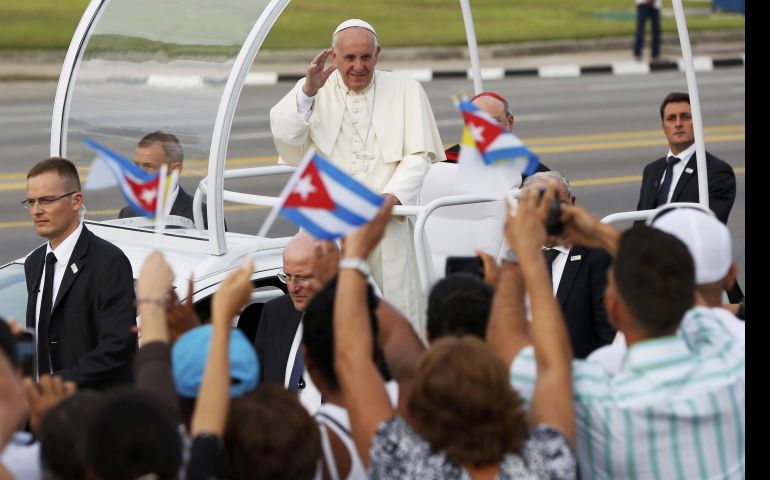 Pope Francis waves to the crowd as he arrives to celebrate Mass in Revolution Square in Havana Sept. 20. (CNS/Reuters/Carlos Garcia Rawlins)
This article appears in the Francis in Cuba feature series. View the full series.

HAVANA, CUBA — In his first major address during a 10-day trip combining visits to the long-isolated but neighboring nations of Cuba and the United States, Pope Francis on Sunday gave a wide-ranging treatise on the Christian call to be at service to one another.

Giving a homily during an open-air Mass at Havana's Revolution Square, long a gathering point for political rallies in this communist country, Francis said service means "putting our brothers and sisters at the center" and sometimes suffering for them.

Then, in pointed words for a nation partly founded on mid-20th-century political zeal, the pope continued: "Service is never ideological, for we do not serve ideas, we serve people."

In a square decorated with a several-story-tall artistic depiction of Marxist revolutionary Che Guevara, Francis drew a distinction between service that is meant to help all people and that is geared only toward people of one political or social group.

"We need to be careful not to be tempted by ... a 'service' that is 'self-serving,' " the pope told the hundreds of thousands gathered for the celebration.

"There is a way to go about serving which is interested in only helping 'my people,' in the name of 'our people,' " he said. "This service always leaves 'your people' outside, and gives rise to a dynamic of exclusion."

Francis exhorted: "All of us are called by virtue of our Christian vocation to that service which truly serves, and to help one another and not to be tempted by a 'service' which is really 'self-serving.' "

The pope was celebrating Mass Sunday, Sept. 20, in his first public event during a three-city Cuban tour that will see him carry on to the United States on Tuesday, where he will visit Washington, New York and Philadelphia.

Both the U.S. and Cuba have attributed their recent thaw in relations, which recently saw reopening of respective embassies in both countries after decades, to the pope's leadership.

The very political nature of the visits to both countries was made apparent immediately upon Francis' arrival in Cuba Saturday afternoon, when President Raúl Castro used his welcoming speech to compare the pope’s emphases in his papacy to those of the Cuban Revolution -- saying the pope has struggled "against the structural sources of poverty and inequality."

In his homily Sunday, Francis focused much more on the basics of the Christian message. Reflecting on the day's Gospel reading -- where Jesus lightly reprimands his disciples for arguing about who was the greatest among them -- the pope focused on Jesus' definition of service.

Jesus' reply to the disciples --  “Whoever wishes to be the first among you must be the last of all, and the servant of all” -- represents a "great paradox," the pope said.

Jesus upsets the disciples' mindset "by telling them that life is lived authentically in a concrete commitment to our neighbor," Francis said.

"The call to serve involves something special, to which we must be attentive," he said. "Serving others chiefly means caring for their vulnerability. Caring for the vulnerable of our families, our society, our people. Theirs are the suffering, fragile and downcast faces which Jesus tells us specifically to look at and which he asks us to love."

"Being a Christian entails promoting the dignity of our brothers and sisters, fighting for it, living for it," said the pope. "That is why Christians are constantly called to set aside their own wishes and desires, their pursuit of power, and to look instead to those who are most vulnerable."

Addressing more specifically the Cuban people, Francis later said that those in Cuba have "a vocation of greatness."

"Today, I ask you to care for this vocation of yours, to care for these gifts which God has given you," the pope told the Cubans.

"But, above all, I invite you to care for and be at the service of the frailty of your brothers and sisters," he said. "Do not neglect them for plans which can be seductive, but are unconcerned about the face of the person beside you."

After celebrating Mass Sunday, Francis led those in the square in the traditional Sunday Angelus prayer. The pope used his remarks before the prayer to focus on continuing peace talks taking place in Cuba between the Colombian government and the Revolutionary Armed Forces of Colombia (FARC).

"At this time I feel bound to direct my thoughts to the beloved land of Colombia," said the pontiff. "May the blood shed by thousands of innocent people during long decades of armed conflict, united to that of the Lord Jesus Christ crucified, sustain all the efforts being made, including those on this beautiful island, to achieve definitive reconciliation."

"Please, we do not have the right to allow ourselves yet another failure on this path of peace and reconciliation," Francis begged.

Later Sunday, the pope will head for a private meeting with Castro at the country's presidential palace before praying vespers with the country's bishops, priests, and religious later in the day.

On Monday, Francis will travel some 400 miles east for visits to the Cuban cities of Holguin and Santiago.

Vatican spokesman Jesuit Fr. Federico Lombardi said in a press conference Saturday evening that Francis considered peace the "key word" of his visits to Cuba and the U.S., and that the pope wanted to focus on building bridges between the countries.

Among those seen attending the Mass Sunday in Revolution Square were U.S. Cardinals Sean O'Malley and Theodore McCarrick, respectively the archbishop of Boston and the archbishop emeritus of Washington.

Upon landing in Cuba Saturday, Francis strongly urged the U.S. and Cuba to continue their thaw in relations.

"For some months now, we have witnessed an event that fills us with hope," the pope told Castro and others during a speech at Havana's airport. "The process of normalizing relations between two peoples following years of estrangement."

"It is a sign of the victory of the culture of encounter and dialogue," he said.

"I urge political leaders to persevere on this path and to develop all its potentialities as a proof of the high service which they are called to carry out on behalf of the peace and well-being of their peoples, of all America, and as an example of reconciliation for the entire world," Francis said.

In his own remarks Saturday, Castro thanked Francis for his help in the reopening of relations with the U.S. but blasted the continuing economic embargo against the island and called for the return of the land used by the U.S. military in Guantánamo Bay.

"The blockade, which causes human damages and privations to the Cuban family, is cruel, immoral and illegal, and it should cease," Castro said. "The territory usurped by the Guantánamo Naval Base should be returned to Cuba."

Besides his scheduled visits Sunday, Francis may also be making a short visit to see former Cuban President Fidel Castro but that details had not been confirmed, Lombardi said Saturday.

Transportation Ideas for the Papal Mass in Philadelphia