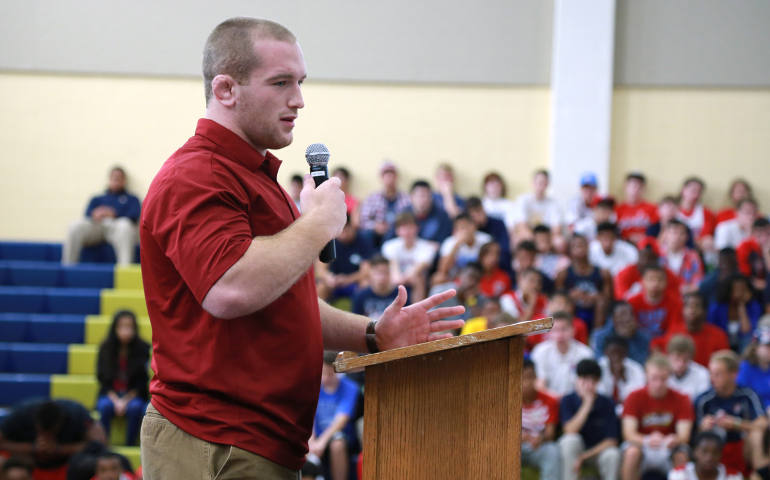 Kyle Snyder's knack for making history began during his junior year of high school, when he helped win the first-ever state championship for the wrestling team of Our Lady of Good Counsel in Olney, Md. In March 2015, Snyder helped Ohio State win its first national title in wrestling, and in September of that same year, Snyder became the youngest world champion in the history of USA wrestling.

Now, he is hoping to continue this streak at the 2016 Summer Olympics in Rio de Janeiro. Snyder is set to compete Sunday in the 97 kg/213 lbs. division in one of the Rio Games' final events.

Snyder, whose family attends St. Joseph Parish in Sykesville, Md., started wrestling when he was 5. He said he first dreamed of being in the Olympics when he was about to enter high school at Good Counsel. When he was a sophomore, the password on his phone was "2016," as a way of motivating him to become an Olympic champion in 2016.

After his junior year at Good Counsel, Snyder left to spend his senior year at the Olympic Training Center in Colorado. Now a rising junior at Ohio State, he still returns to visit Good Counsel, and when he does he often uses their weight room and stops to talk to some of his teachers.

Snyder created a Go Fund Me account to raise money for his family to travel to Rio to watch him compete, and he said that people from the Good Counsel community played a large part in the fundraising. Due to Snyder's love for the school, Good Counsel will be hosting the Ohio State vs. University of Maryland wrestling match in the upcoming season.

"I love Good Counsel. I was able to make some great friends not only with the students but the teachers and administration," Snyder said. "While I was there, it was awesome for me academically and athletically and spiritually, getting to learn more about Christ."

Snyder said he relies on his faith to help him cope with the pressure that may come from competing. "Knowing that (God) has a plan for me has always helped me live a stress-free and worry-free life," he said.

Last September, Snyder returned to Good Counsel and spoke about the importance of hard work. He told the students a story about a younger wrestler asking him for advice. Snyder told him to "believe in the process and consistently work as hard as you can," but it looked like that was not what the boy was looking for -- he was looking for a magic answer on how to get to the top.

"There really is no silver bullet or magic behind becoming successful in whatever you want to do," Snyder told the students. "It takes a lot of hard work, a lot of consistent hard work. ... It takes a long time, a lot of believing in yourself, believing in the people that surround you and always looking toward that end goal and knowing that one day you are going to reach it."

Snyder also spoke about his growing faith and encouraged students to ask questions in religion class and get to know Jesus before they go to college.

"More important to me than consistently working hard and believing in yourself and setting goals and stuff like that is thanking God," Snyder said.

At the end of his speech, the school surprised him by presenting him with an honorary diploma.

Snyder has found a strong faith community among the other Olympians, and when he was at the Olympic Training Center, the coaches there started taking him to Bible studies. It was during that time that his passion for learning about Christ grew.

"As athletes, I think especially at a high level ... there can be a lot of pressure on you to succeed," he said. "I know my faith has just allowed me to live freely in those moments.

"I still get a little bit nervous moments before my match, but not as much as I used to. It has just allowed me to open up more and face becoming the best wrestler than I can be and the best athlete and best person I can be, because that is what God has called us to do. To be Jesus-like is what the ultimate goal is, and you can chase that personally, as an athlete, in your community, and in everything you do."

While he admits "everybody's goal is to win," Snyder's attitude going into the Olympic games in Rio reflects his trust in God and value of hard work over accolades.

"I want to compete as hard as I can and try to wrestle to the best of my ability," Snyder said. "If I do that, then the rest will take care of itself."