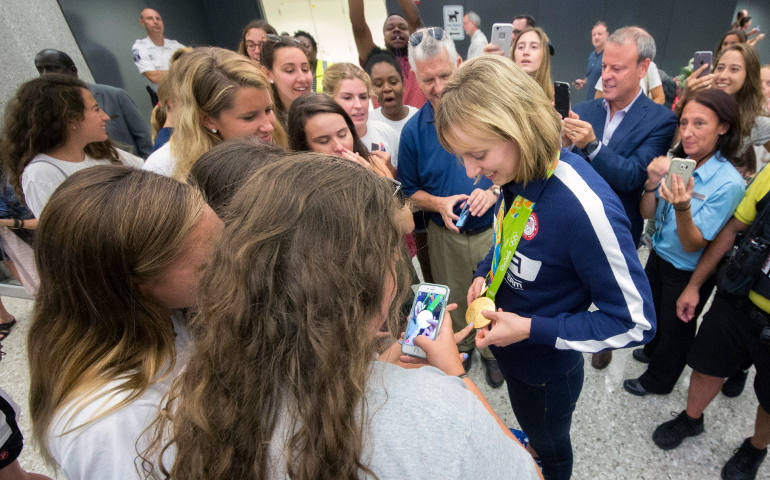 After winning five medals -- four gold and one silver -- at the 2016 Olympics in Rio de Janeiro, swimming champion Katie Ledecky is taking things one step at a time on her return home.

Wearing her medals around her neck, the first step was right into the arms of friends waiting to greet her as she walked into the baggage claim area of Dulles International Airport outside of Washington on Wednesday.

Dozens of others cheered and applauded the Olympic champion, a graduate of Stone Ridge School of the Sacred Heart in Bethesda, Md.

Soon after saying her hellos, Ledecky told reporters that the next things on her to-do list were to eat a home cooked meal, sleep in her own bed and buy everything else she needs for her college dorm room at Stanford University, where she was soon to begin classes. The 2020 Olympics in Tokyo are on the horizon, but for now, college calls.

Ledecky's ability to set swimming aside for a few weeks as she prepares for college just like any other incoming freshman is reflective of the humility that so many in the Stone Ridge community admire about her.

"What makes her a really good role model is she is so humble," said Colleen Carey, a 2015 graduate of Stone Ridge who was a co-captain of the swim team with Ledecky. "She is so grounded not only in her studies but as a person. ... Lower schoolers can look up to how she has dealt with the fame."

"Her swimming really doesn't define her as a person, which is what I think keeps her grounded," Karrels told the Catholic Standard, Washington's archdiocesan newspaper. "She is so lovable."

So far, being a normal student and pursuing her goals at the same time has worked well for Ledecky, who met the goals she had set for Rio as far back as 2013.

"I hit them right on the nose and I think that's the best feeling any swimmer can have," Ledecky told reporters.

Kelleigh Haley, a 2016 graduate of Stone Ridge who swam with Ledecky at the Nation's Capital Swim Club and on the Stone Ridge team, was one of the people awaiting the Olympian's airport arrival.

Haley remembers swimming with Ledecky in practice, and while everyone she swam with always worked hard, Haley said, "She is just out of everyone else's league." Citing Ledecky's 11-second margin of victory in the 800-meter freestyle, Haley added, "She's in her own race."

Ledecky worked hard regardless of the circumstances, Haley added. She particularly remembers when Ledecky had her wisdom teeth removed and was back in the pool days later. But Ledecky's hard work and success never stopped her from looking out for her teammates.

"She really wants to calm you down and wants you to have your best race, regardless of if it is an Olympic race or a high school race," Haley said.

The crowd of supporters from Stone Ridge wore their "Ledecky Team USA" T-shirts, holding a large banner, and even had a large cut-out of Ledecky's head. They chanted, "Katie! Katie!"

"It is very hard not to burst with pride," said Paul Boman, an assistant swim coach and theology teacher at Stone Ridge. "It can't happen to a nicer, more deserving, better person."

Ledecky said the support of the community "means so much to me," and that she felt it thousands of miles away during her week at the Olympics.

"To have them here and to celebrate this with them right away is great," she said.

In an email interview with the Catholic Standard before this summer's Olympics, Ledecky -- who is known for saying the Hail Mary or other prayers before each race -- said her Catholic faith gives her strength and helps her keep balance in her life.

"My Catholic faith is very important to me. It always has been, and it always will be," said the Olympic champion, who is a parishioner at the Church of the Little Flower in Bethesda. "It is part of who I am, and I feel comfortable practicing my faith. It helps me put things in perspective."