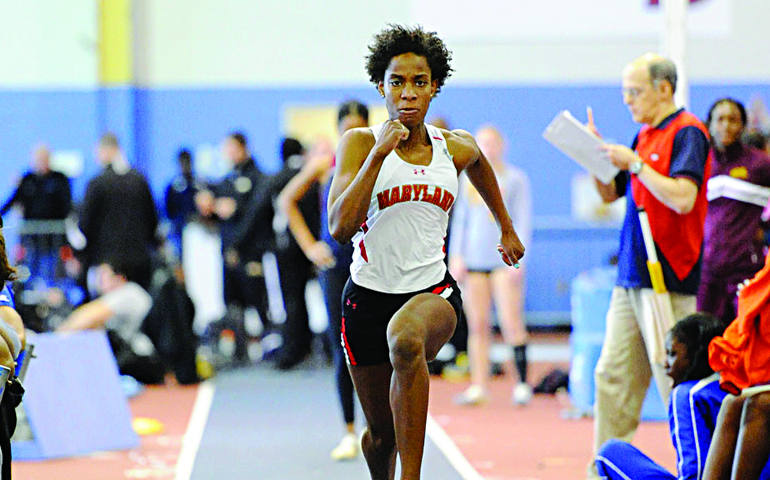 Olympian Thea LaFond participates in a track and field event for the University of Maryland in College Park, Md. A parishioner of St. John the Evangelist in Silver Spring, Md., she will represent her home country of Dominica at the 2016 Olympic Games in Rio de Janeiro. (CNS photo/courtesy University of Maryland)

When Thea LaFond, a parishioner at St. John the Evangelist Parish in Silver Spring, found out she would be headed to the Olympics, the first thing she did was thank God and ask: "How did you do this, God? How did this happen?"

She will represent her home country, Dominica, in the triple jump, part of track and field competition. While she was just shy of the qualifying mark for the Olympics, each country is entitled to two athletes -- one male and one female -- and since Dominica only had a male entrant, the Olympic Committee accepted LaFond as the female competitor.

The qualifying round for women's triple jump begins Saturday at Rio's Olympic Stadium.

LeFond's route to the sport of track and field was not direct. She was originally a dancer, taking classes in ballet, tap and jazz at age 7. When she was 13, she had to stop because her family could no longer afford it. To fill that void, she turned to high school sports.

She joined the volleyball team at John F. Kennedy High School in Silver Spring her freshman year, and when the winter season rolled around, she asked if she could manage the basketball team. The coach said no, because he thought she looked too athletic. Her friends convinced her to try track, and when she showed up for her first practice, she began by joining the distance runners. The coach said, "Let's try something else," and told her to watch and copy another runner who was doing hurdles. That began the jumping career that would lead her to competing in the women's triple jump in Rio.

She said she was first inspired to go to the Olympics when she saw Usain Bolt, a sprinter from Jamaica, succeed during the 2008 Beijing Olympics. She had just started running track, but she still thought, "This could be me one day."

"This man from an island in the Caribbean, Jamaica, grew up very humbly, but he had a gift," LaFond said. "He held to his hard work and all that dedication, and you saw the sacrifice. I think that is what drew me to it all."

When she was a senior in high school, her lifting coach told her that due to her dual citizenship, she could be competing for Dominica in junior national competitions. She took his advice, and since then she has had the opportunity to travel to places like El Salvador and Jamaica to compete.

LaFond has dedicated herself to a grueling training schedule, which included practicing the triple jump in the snow at 8 p.m., but said she couldn't have done it without God and the people who have been praying for her.

"I mean the amount of people praying for me ... it almost feels like success was inevitable," she told the Catholic Standard, newspaper of the Washington archdiocese.

LaFond is particularly grateful for the support that the St. John the Evangelist community has given her. Throughout high school, she volunteered to teach eighth grade religious education classes with Peg Daly, who followed her track career and told her, "Hey, I'm praying for you." LaFond said these reassurances somehow always came after a difficult week, even though Daly didn't know it, because "she just had this sixth sense about her."

When LaFond got the email confirming she was going to the Olympics, she was sitting in her room and could hear her mom praying down the hall. She called out to tell her mom the good news, and the first things her mom said were: "Praise God. Text Miss Daly."

While trying to qualify for the Olympics, LaFond struggled with an injured heel. She often would limp off the track in pain, but knew that she had to keep getting jumps in if she was going to qualify for the Olympics. She recalls praying to God exactly a week before she qualified, asking him what she should do about the injury, and whether she should just stop for the season.

"He came back one week to that date and answered things for me," LaFond said. The news that she would be going to the Olympics allowed her to take some time off to rest and recuperate, and when she went back to practice for the first time, she was able to jump with very little pain.

Conversations between LaFond and God are commonplace, because from a young age her parents instilled in her that prayer is not something that is formal.

"While he is high up there and all powerful and all mighty, you can still talk to God like he is your best friend," she said.

LaFond, a 2015 graduate of the University of Maryland, attended college on a track scholarship. At the university, she said, she found a "second home" at the Catholic Student Center, where she would go to adoration or Wednesday night Mass and dinner. She started bringing her other Catholic teammates with her to Mass, and before long, "I had my own little crew going to Mass with me on Sunday."

"Having communities like that that always support you is just unbelievable," LaFond said. "Because no matter where you go, you may not have biological family, but there is a Catholic church almost everywhere on this planet, and you will find a support system within those walls."