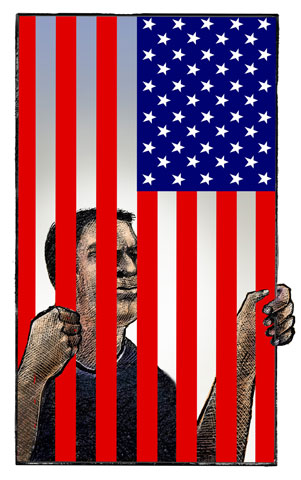 She was a straight-A student: bright, articulate and hard-working. Her academic accomplishments were all the more impressive, since she worked full-time and was single-parenting a child in addition to juggling full-time coursework.

So I was happy to provide a recommendation when, as graduation approached, she began her search for a better, higher-paying career. Not surprisingly, she quickly became a finalist for a position within a well-known company, and had two interviews, which reportedly went well.

Then she got the rejection letter. The reason? Her history of incarceration for a minor drug offense.

She was devastated. Why had she worked so hard to finish her degree if good jobs were going to be denied to her because of her past? Would she ever be free from the consequences of poor decisions made early in her life?

Her agonizing questions prompted some of my own: Do we, as a society, really believe in rehabilitation? Do we, as Christians, really believe in forgiveness? If we do, we must work for prison reform now. It's a pro-life issue, and one that should be front and center in this year's election campaign.

Prison reform is urgent, in part because of the massive numbers of people it affects in our country. The United States is far and away the world's leader in incarceration, with more than 2.2 million adults in federal or state prisons or county jails in 2013 -- plus an additional 4.7 million on parole or probation. We have the highest rate of incarceration in the world (698 people per 100,000 population), not even close to the next-closest countries of Rwanda (492 per 100,000) or Russia (446 per 100,000), according to statistics from the Sentencing Project, a prison reform group.

Why so many? The U.S. prison population has increased 500 percent over the last 40 years (even during decades when violent crime decreased), primarily because of the "War on Drugs," which believed tougher sentencing was a solution to addiction.

According to the Sentencing Project, only 41,000 Americans were imprisoned for drug offenses in 1980. Today, that number is nearly a half a million. Drug offenses are why half of the federal prison population is incarcerated.

While society has a right to be safe from dangerous criminals -- and offenders should pay a price for their crimes -- the extremes of U.S. prison policy have not only hurt offenders, ex-offenders and their families, they're clearly not solving the drug or crime problem either.

It's tempting to seek simple solutions, especially when the public is whipped into a frenzy of fear. In their 2000 letter "Responsibility, Rehabilitation and Restoration: A Catholic Perspective on Crime and Criminal Justice," the U.S. bishops argued against simplistic, one-size-fits-all solutions, such as mandatory minimum sentencing. They also warned about the for-profit prison industry, which prioritizes profit above the treatment, rehabilitation and reintegration of offenders into society.

Instead, the bishops and other Catholics working for prison reform call for "restorative justice," which emphasizes both justice and mercy, our current pope's favorite word.

Restorative justice "recognizes that root causes and personal choices can both be factors in crime" and seeks "to address crime in terms of the harm done to victims and communities, not simply as a violation of law," the bishops wrote.

There seems to be growing political will to temper the excesses of failed sentencing and other unjust criminal justice policies. In January, President Barack Obama announced reforms around the issue of solitary confinement, especially for juveniles, though only in federal prisons.

Last year, the U.S. bishops' Committee on Domestic Justice and Human Development and leaders of Catholic Charities wrote in support of a bill that would provide sentencing reforms. That bill is now languishing in committee. There is so much more to be done.

Yet my sense is that prison reform is not a "front-burner" issue for everyday Catholics. Perhaps after binge-watching "Orange Is the New Black," they stop to think about the failures of our current criminal justice system. Or maybe they buy a few presents for a Christmas "Angel Tree" that assists children of incarcerated parents. Clearly, many Catholics are working hard on the extreme issue of the death penalty, and prison chaplains are tending to the everyday spiritual needs of prisoners.

But unless we have a personal connection, it can be hard to see this issue as urgent. For me, it's not only my former student, but a close family friend who has been incarcerated, a young man I've known since he was 3. My heart aches for him as he spends most of his adult life behind bars, trying to navigate the often unfair and overpunitive prison system.

As a Christian and Catholic, I believe in the human dignity of every person, even those who have made serious mistakes. I also recognize the preferential option for the poor, who are clearly most affected by this issue.

Finally, I believe our faith calls us to forgive. In this, the Year of Mercy, let us extend that forgiveness toward those in prison and practice the corporal work of mercy to "ransom the captive" by working for prison reform now.

[Heidi Schlumpf teaches communication at Aurora University, outside Chicago. Read all of her columns at NCRonline.org/authors/heidi-schlumpf.]

A version of this story appeared in the April 8-21, 2016 print issue under the headline: Prison reform is a pro-life -- and political -- issue.