Skip to main content
News
This story appears in the Francis in Sri Lanka feature series. View the full series. 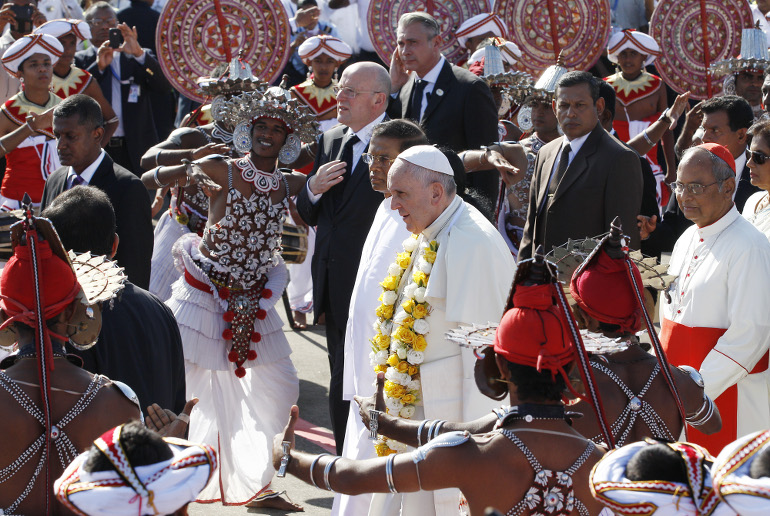 To the sounds of traditional dancers and drummers, Pope Francis arrives at the international airport in Colombo, Sri Lanka, Jan. 13. (CNS photo/Paul Haring)

Beginning his three-day trip to a nation still recovering from a bloody 26-year civil war, Pope Francis called on Sri Lankans to accept each other's differences and to seek the "full inclusion of each member of society."

"It is a continuing tragedy in our world that so many communities are at war with themselves," said Francis, speaking at a formal welcoming ceremony moments after landing in the country Tuesday.

"Sri Lanka for many years knew the horrors of civil strife, and is now seeking to consolidate peace and to heal the scars of those years," he continued.

"It is no easy task to overcome the bitter legacy of injustices, hostility and mistrust left by the conflict," said the pontiff. "It can only be done by overcoming evil with good and by cultivating those virtues that foster reconciliation, solidarity and peace."

"For that process to succeed all members of society must work together; all must have a voice," said Francis, putting emphasis on the word all. "Most importantly, they must be prepared to accept one another, to respect legitimate differences and learn to live as one family."

Francis was speaking Tuesday on the first of two and a half days on the island nation, located off the southeast tip of India. The visit, which comes only five days after a contentious presidential election in the country, is expected to be marked by several calls for peace and reconciliation between the two main ethnic groups that fought in the war.

Departing from the papal plane early Tuesday morning, Francis was greeted by a 21-gun salute from the Sri Lankan military, some 40 elephants dressed in festive over-garments, traditional dancing and school children chanting: "We want papa!"

The pontiff then spoke in a public discourse to newly elected president Maithripala Sirisena, who unexpectedly ousted his predecessor with 51.2 percent of the vote last Thursday.

Addressing obliquely the continuing ethnic divisions in the country -- between the majority Sinhalese and the minority Tamil ethnic groups -- Francis said that "whenever people listen to one another humbly and openly, their shared values and aspirations become all the more apparent."

"In this sense, the great work of rebuilding must embrace improving infrastructures and meeting material needs, but also, and even more importantly, promoting human dignity, respect for human rights, and the full inclusion of each member of society," said the pontiff.

Francis also seemed to back calls by some Sri Lankans and the U.N. for independent truth commissions to investigate alleged crimes and incidents during the country's war, saying: "The process of healing needs to include the pursuit of truth, not for the sake of opening old wounds, but rather as a necessary means of promoting justice, healing and unity."

In his remarks to Francis, Sirisena said the pope's visit was "especially significant to me personally because I have been elected as president ... only a few days ago."

"The visit of your holiness gives me an opportunity to receive your blessing as I begin my term of office," said Sirisena.

Francis is visiting Sri Lanka as the first trip in a two-part Asian voyage that will see him continue on to the Philippines on Thursday. The pontiff is spending Tuesday in the Sri Lankan capital, located on the southwest coast of the island, before heading north Wednesday to visit Madhu, an area that was most affected by the war's violence.

Sirisena, who was sworn into office one day after his election, replaced Mahinda Rajapaksa, who had ruled the country since November 2005 but had been criticized for assuming a number of powers into his executive office.

There had been fears of violence surrounding the election, but Sri Lankan police said it was the most peaceful in the country's history -- with only some 400 reports of isolated instances of violence at polling places.

One Sri Lankan priest said in an interview before Francis' visit that the pope’s coming had helped contribute an air of peace to the polls.

"In a way, the pope's visit has made the election very peaceful, and free and fair," said Claretian Fr. Rohan Dominic, the regional superior of his order in Sri Lanka.

"It's because of the pope's visit that the election was in a completely different shape this time," Dominic continued. "It's a Francis miracle."

The pope is to meet again personally with Sirisena Monday afternoon, in the first state visit hosted by the new president. While neither the pontiff nor the politician are to make official remarks during the event, many Sri Lankans have their hopes set on what Francis might say during the encounter.

Fr. Jeyabalan Croos, a priest of the Sri Lankan diocese of Mannar who has advocated for human rights concerns for those most affected by the country's civil war, said he hoped the pontiff would encourage the president to cooperate with U.N. investigations of human rights abuses.

"The pope may indicate in someway or other to cooperate with the UN, with the investigations," said Croos, referring to several attempts by the international organization to launch investigations in the country. "Maybe the new regime will do something."

Croos, whose Mannar archdiocese includes the Madhu area where Francis will visit Wednesday, also expressed hope that Francis might discuss the number of people who disappeared during the war, or have been detained since its conclusion by the government.

Families of those people, said Croos, "have been asking a long time for their loved ones: 'Tell us where they are, or if they are dead, tell us about that.' But the government has so far denied it."

"We will be happy if the pope also said something about these disappeared people," said Croos.

Following his personal visit with Sirisena Tuesday, Francis is to take part in an inter-religious encounter with several leaders of Sri Lanka's other religious groups, where he is expected to speak on the need for inter-religious dialogue to continue reconciliation efforts in the country.

A nation of some 21 million, Sri Lanka is majority Buddhist, with 72 percent of its population identifying with that religion. 12 percent identify as Hindu, nine percent as Muslim, and seven percent as Christian.

A priest who used to lead the Colombo archdiocese's office of inter-religious dialogue said he hoped Francis would speak on the need for the religious groups not to keep apart from one another.

"The pope I think should speak of common understanding, welfare of each other," said Fr. Reid Shelton Fernando.

"When you speak of dialogue it's not domineering ... so all religions have a part to play in the process of reconciliation and also building up just society in the country," said Fernando, a priest of the Colombo archdiocese who is serving now as a chaplain to a charismatic renewal group.

When Francis travels to Madhu Wednesday he will visit a popular Marian devotional site, Our Lady of Madhu church. Reconciliation, dialogue, and encounter will likely be the themes again at the site, which was shelled numerous times during the war.

But for some in the country the pope's message, while seen as necessary, may be hard to carry forward.

Croos, a Tamil who was granted a sabbatical from parish work by his bishop over the past year to focus on human rights advocacy, recalled that Francis had told the Sri Lankan bishops during a visit to Rome last year that they needed to be a bridge on both sides of the two ethnic groups.

"But the hurdle comes when we are prepared to reconcile, but it's going to very difficult for us because our losses are not acknowledged," he continued. "I believe that truth must precede reconciliation."

"For reconciliation, the people who have caused violations must acknowledge [it]," said Croos. "There must be truth, which is accompanying reconciliation."

"I believe we have to work for truth and justice, and through that reconciliation will come about," he said.