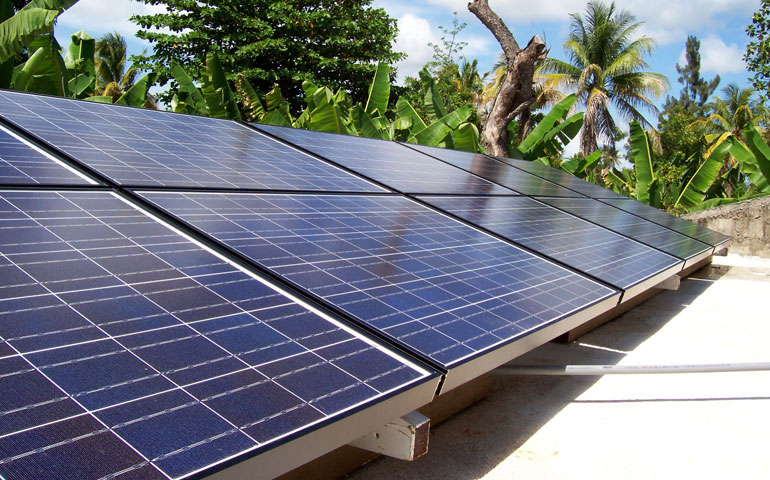 Frank Bergh's professional chapter of Engineers Without Borders installed this 9.5-kilowatt solar panel system on the roof of a birthing clinic in Haiti in 2009. (Frank Bergh)

A few years ago I was on the campus of the University of Notre Dame in Indiana. Before the Saturday afternoon football game, I attended a groundbreaking ceremony for the new, state-of-the-art Stinson-Remick Hall of Engineering.

Kilpatrick recently reiterated this view. "I wholeheartedly believe that," he said. He listed several projects undertaken by Notre Dame students and faculty over the years to make his point.

Kilpatrick himself is involved in the Tshumbe, Congo, hybrid electric microgrid project, led by Patrick Murphy, managing director of Notre Dame's Center for Sustainable Energy. Most of the global south (Africa, Latin America and South Asia) is populated by villages and cities without a robust electric grid. As a result, these people, who are among the poorest on the planet, pay unusually high rates for their electricity because of the expense associated with trucking or flying diesel into a remote area and then using a diesel generator to produce electricity.

In an effort to solve this challenge, Notre Dame engineers have or are installing two hybrid electric microgrids: one in Tshumbe, a remote area with more than 2 million inhabitants. The concept is to install solar panels (which can generate electricity at a cost of roughly $0.20 per kilowatt hour) in conjunction with diesel generation, and then store energy with an ultracapacitor. The ongoing costs for electricity generation will be significantly lower than the diesel alone. A similar system is being installed in Uganda. In Nepal, a system is being installed that uses hydro and diesel.

Kilpatrick and Notre Dame are not alone in this work. Not by a long shot.

In 2000, Bernard Amadei, a professor of civil engineering at the University of Colorado Boulder, was chatting with his landscaper, who described the lack of electricity, running water and sanitation in his home country of Belize. Amadei subsequently took a team of students and installed a clean water system there for $14,000.

Amadei decided to harness the power of professional and student engineers to complete similar low-tech, high-impact projects in other developing countries. In 2002, Engineers Without Borders USA was established in Boulder.

In just 10 years' time, Engineers Without Borders has experienced substantial growth, from eight engineering students and a civil engineering professor to an organization of 18 full-time staff, 93 professional and 201 student chapters, and more than 12,500 members.

In 2011, the chapters partnered with some 243 communities on 264 projects, which involved 153 chapters traveling to 37 countries to work on water, energy, agriculture, structures, sanitation and information systems. All of this has impacted more than 2.3 million lives.

According to Frank Bergh, it was Engineers Without Borders that convinced him to become an engineer with a focus on helping the poor.

"This reconnected for me that engineering is a people-serving profession," Bergh said. "We engineer solutions, improve the quality of life of others, and in order to do that it had to be grounded in the real needs of real people. So I didn't have to make a choice between becoming an engineer and entering a service-driven profession."

Upon graduating in 2008 with an electrical engineering degree, Bergh bought himself a plane ticket to Guatemala and spent two weeks at Washington University's project there.

Bergh was just getting started with his involvement with Engineers Without Borders. After moving to Kansas City, Mo., to take a full-time engineering job, Bergh became a liaison to college chapters.

For students and faculty who get involved in international projects, the experiences are transformational.

"I learned as much from a rusty bookcase in Haiti about electrical engineering than I did in all of undergrad," Bergh said.

In 2009, his Kansas City professional chapter was in Haiti, installing a 9.5-kilowatt solar panel system on the roof of a birthing clinic. After installing 48 panels, he and his team allowed for a couple of days to undertake diagnostics. He came back the next day and noticed the bookshelf against a toolshed, positioned in front of the only exterior electrical outlet they had installed. On its shelves were three power strips, and plugged into every socket of the power strips was a cell phone charger. All of the medical staff and many of the patients had already plugged in their cell phones.

For Bergh, it was an instant confirmation that this technology would make a difference.

With so many projects in so many locations, how can Engineers Without Borders assure that the people are getting quality projects?

"Our projects are not market-driven or technology-driven," Bergh said. "They are community-driven. All of the communities with EWB projects have invited EWB to come into their communities. We commit to a five-year relationship with the community."

Bergh explained that there are three types of trips. First, there is the assessment trip, which involves community interviews and taking measurements.

Second, there is the implementation trip. However, prior to this trip, the chapter runs its design past a project manager, who is a licensed engineer at Engineers Without Borders USA, and makes a presentation to the technical advisory committee of engineering experts.

Marquette's Engineers Without Borders chapter has some 30 members. Rachel Beyer, an environmental engineering student from Franklin, Wis., is the chapter's project leader.

The Marquette chapter is focused on raising the final $50,000 to complete the project and has raised $6,000 so far.

For Beyer, this project changed her view of engineering.

"While I was in high school and really pumped about being an engineer, I was very excited about the big picture, of the huge things I could do with an engineering degree," she said. "Now after this project, I realize that even these small projects change people's lives."

Beyer graduates in 2015 and expects to continue to be a part of Engineers Without Borders. "It's definitely something I'd like to stay involved with quite possibly for the rest of my life," she said. "It had a very large effect on me and it's been a great experience."

Back at Notre Dame, a Engineers Without Borders chapter has been started and will work alongside existing engineering programs and projects focused on helping solve the world's problems.

According to the Notre Dame chapter's co-president, Chris Podgorski, a chemical engineering major from Denver, some 200 students are members, paying $20 in membership fees. The chapter has identified a water filtration project in Agua Caliente, a rural community in El Salvador. The chapter is planning its assessment trip for the spring or summer break of 2013. In the meantime, it is undertaking fundraising activities to help pay for the project.

"We want to get involved and get our hands dirty and use what we learned in the classroom in the real world, by giving back to the less fortunate," Podgorski said. "EWB offers students an opportunity to travel and get a global perspective."

Bergh sums it up this way: "Too often engineering's role is centered upon those with greatest net worth and not those with the greatest human need. We need to prioritize designing in an environment and an economy where basic human needs are met on a global basis and EWB-USA is an organization that demonstrates how the engineering profession employs a preferential option for the poor."

A version of this story appeared in the Nov 9-22, 2012 print issue under the headline: Designed to serve.