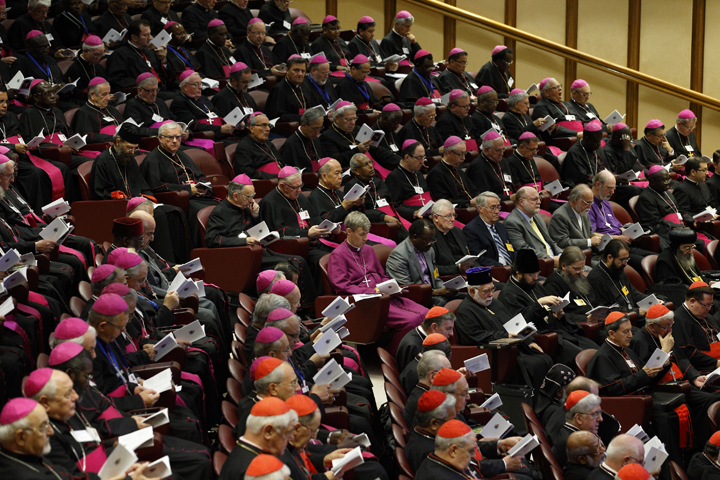 Cardinals, bishops and other delegates attend a session of the Synod of Bishops on the family at the Vatican Oct. 15. (CNS/Paul Haring)

The prelates at the worldwide meeting of Catholic bishops on family have entered into what has been expected to be one of the most contentious points of their discussions: how the church should treat persons who divorce and remarry without first obtaining annulments.

Amid 93 speeches Wednesday and Thursday by the some 270 prelates at the ongoing Oct. 4-25 Synod of Bishops, many reportedly referred to that question and expressed widely differing views.

One key issue: whether there could be any possibility for divorced and remarried people to take on some sort of “penitential path” that would eventually allow them to receive the Eucharist.

“We must recognize that the issue of access to the sacrament ... was repeated over and over again,” one Vatican spokeswoman said Thursday during a briefing summarizing the discussions. “This issue is particularly interesting so far as it somehow crystallizes the differences existing in the different approaches.”

Romilda Ferrauto said the prelates’ discussions widely boiled down to two separate views: Either wanting to “accompany people in spite of their failures without watering down [church] teaching” or “warning against quick fixes or quick solutions” to pastoral problems.

Ferrauto, one of five Vatican spokespersons presenting broad outlines of the bishops’ deliberations in different languages, said those in favor of some sort of “penitential path” did not want to allow “indiscriminate access to the Eucharist, but a customized approach for each diocese.”

"Depriving these people of Eucharist and the sacrament of reconciliation is unjustified,” the spokeswoman quoted one of the bishops’ remarks. She said that bishops had said that divorce "is a sort of tragedy for the family” but asked: “How can the church punish something that is part and parcel of the human experience?"

Ferrauto was speaking Thursday during a briefing on the Synod’s deliberations, which are taking place behind closed doors. The Vatican is hosting daily briefings with spokespeople summarizing the discussions in several languages.

Divorced and remarried persons are currently prohibited from receiving the Eucharist under Catholic teaching, unless their first marriages are declared null by church tribunals.

Jesuit Fr. Bernd Hagenkord, a native German who normally works for Vatican Radio, gave a brief outline of general themes discussed during the Synod’s open sessions Wednesday and Thursday, saying there were “many, many” speeches by bishops on the topic of access to the sacraments for the divorced and remarried.

Hagenkord said one bishop had proposed a “catechumenal path” for such persons, and that Pope John Paul II’s 1981 apostolic exhortation Familiaris consortio was cited frequently in the discussions.

Basilian Fr. Thomas Rosica, who helps the Vatican with English-language media, said one bishop had spoken of a need to “profess the faith with clarity, to know what the creed means and also to know not only such expressions as doors wide open but the importance of the narrow path sometimes, which is difficult to follow.”

Fr. Manuel Dorantes, a Chicago-area priest mainly helping the press office with Spanish-language media, said one bishop had told a particularly moving story about a child of a remarried couple who had received the Eucharist and then shared it with their parents.

That bishop, Dorantes said, wanted to show “the suffering of the children of these divorced and remarried couples.”

Asked by NCR during the briefing how the synod might impact his own ministry in Poland, Gądecki he has been most impacted by the accent of the discussions on accompanying divorced persons "with love, friendship, [and] affirming in them the desire to be loved by the church."

"We have always thought of the penitential path in that sense,” said Gądecki of the Polish bishops. "Priests have to be in contact with those who are divorced, [and] give them support in their difficulty."

The archbishop also said there is no fear among the synod bishops about the discussions, stating: "The atmosphere of fear does not exist because we believe in the Holy Spirit."

Among speeches given by synod bishops Wednesday was one by Australian Cardinal George Pell, who gave the text of his remarks to the British Catholic magazine Catholic Herald.

“Too many have lost confidence in Jesus’s doctrines and doubt or deny that mercy is found in his hard moral teachings,” states Pell in the text. “The crucified Jesus was not afraid to confront society, and he was crucified for his pains, teaching his followers that life is a moral struggle that requires sacrifices, and his followers cannot always take the easy options.”

“Groups of bishops do have the authority to teach, explain, and even develop doctrine; but not even a council with and under a pope can change essential Catholic moral teachings sanctioned by Scripture and the Magisterium,” he continues.

Irish Archbishop Eamon Martin told The Irish Catholic Thursday that he had spoken to the Synod about its failure to speak about the “shattering” effects of clerical child sex abuse on families.

“This is a major synod on the vocation and mission of the family, and for us to ignore the whole issue of abuse in the discussions and indeed in the synod hall would be a mistake,” Martin said he told the gathering.

“We know only too well the horrific impact of sins and crimes of abuse in the church family: the betrayal of trust, the violation of dignity, the shame -- both public and private, the anger and alienation, the wound that never seems to heal,” he said.

Martin also said he was opposed to the idea of giving regional or local bishops’ conferences authority on certain matters related to marriage and the family.

But he also stressed that the church adopt more inclusive language toward gay people, saying the church needs to be “very aware that some of the language that can be used in Church circles about gay people is to them disrespectful and offensive.”

The synod is meeting again in open session Thursday afternoon and Friday. The members will then meet in the 13 small discussion groups, separated by language preference, on Saturday and Monday.

Among bishops the Vatican said had spoken at the Synod sessions Wednesday and Thursday: