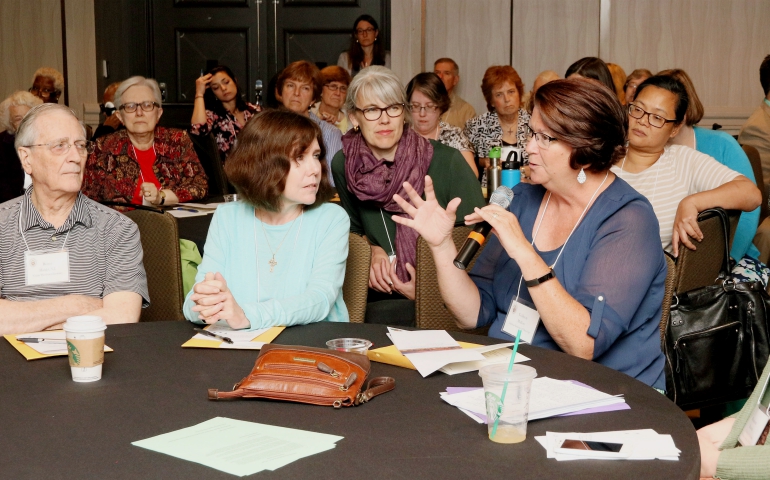 Members of the Catholic Theological Society of America participate in a Q-and-A session during the organization's annual meeting June 8 in Albuquerque, New Mexico. (Jan Jans)

Catholic theologians expressed concern and dismay about President Donald Trump's decision to withdraw from the Paris Agreement on climate change, with at least one theologian calling such action "objectively sinful." The president's announcement had come one week before a group of Catholic theologians met for their annual convention, which focused on the intersection of faith and care for the environment.

"By reneging on its commitments, the U.S. could well undermine the shared trust that keeps other nations committed to the accord, with potentially devastating consequences for the entire planet," said Jesuit Fr. David Hollenbach, outgoing president of the Catholic Theological Society of America. "This suggests that Trump's decision to withdraw can be seen as objectively sinful."

Meanwhile, a group of Hispanic theologians took a public position expressing "deep regret and disappointment" in the president's withdrawal from the international agreement, noting that the decision "runs directly counter to the vision for care of creation presented by Pope Francis in his Encyclical Letter 'Laudato Si',' among other ecclesial documents."

The statement from the Academy of Catholic Hispanic Theologians of the United States was released at the conclusion of its June 5-8 meeting in Albuquerque and dated June 9. The Catholic Theological Society of America meeting followed on June 8-11, gathering more 360 theologians from around the United States and the world.

"We stand with the international community of scientists, academics and citizens of the world, who recognize the impact of climate change on all of creation, particularly the world's most vulnerable citizens," said the Hispanic theologians' statement. "As such, we commit to stand with global and local leaders who act in a manner that promotes environmental stewardship that meets or surpasses the previously held commitment of the United States to the Paris Climate Agreement."

Hollenbach also praised mayors and governors who have pledged to continue the Paris Agreement commitments. His talk, titled "The Glory of God and the Common Good: Solidarity in a Turbulent World," argued that promoting the common good — such as through the Paris Agreement — and giving greater glory to God are deeply interconnected.

"Every Christian has a moral duty to make such contributions to the common good," Hollenbach said, adding that the church — as the single largest global institution in the world today — is in a position to be a key agent of the common good through its social ministry.

But Hollenbach said promoting the common good — in care for the environment and all its inhabitants — is not only a social duty but a religious one. Citing the example of St. Ignatius of Loyola, Hollenbach said it is clear that "the promotion of the common good is itself a way to show forth God's glory in the midst of history — part of the distinctively religious Christian vocation."

Such a commitment is essential when the tendency of populist and nationalist movements is "to replace collaboration for the international common good with pursuit of an illusory understanding of national self-interest," he said, noting that anti-globalist sentiment has both racist and anti-Islamic sentiment as well as roots in real suffering.

Yet he added that when St. Augustine and Luther described sin as being "turned in on oneself," "they could have been describing important currents in our politics."

Hollenbach said Francis' connection of the Eucharist with the work to protect our "common home" in "Laudato Si', on Care for Our Common Home" is evidence of the link between the common good and the glorification of God in history.

The pope's encyclical was the topic of numerous presentations at the conference. One panel looked at the reception of the document in an age of polarization — and of Twitter. With more than 34 million followers and tweets in nine languages, Francis' Twitter accounts and other social networks are intentionally being engaged in the promulgation and reception of magisterial teaching, argued Stephen Okey of St. Leo University in Florida.

Okey pointed to the Vatican's "Twitterbomb" in the days following the release of the encyclical as evidence of social media use for promulgation, while the continuing use of the hashtag #LaudatoSi reflects attempts to understand, interpret and apply the teachings — or reception.

Drawing on survey data surrounding the awareness and support, or lack thereof, of Laudato Si', Annie Selak of Boston College noted that a majority of Catholics were not even aware of the encyclical, raising the question: "What does reception look like in an uninformed age?"

Those knowledgeable about the encyclical had divergent opinions about it, but Selak argued that such diversity was not a problem, unless it leads to ecclesial polarization. "Polarizing opinions shaped by the U.S. political system run the risk of ossifying as exclusiveness, resulting in church members being diametrically opposed to one another and failing to be in communion," she said.

Dialogue is the appropriate response to such polarization, argued Gregory Hillis of Bellarmine University in Kentucky, and the pope models and urges that dialogue in Laudato Si'.

The pope "urges all within the church away from the selfish fragmentation that is at the root of environmental degradation and toward a conversion of openness to others, both human and non-human," said Hillis, adding that a dialogical church is "a countercultural one that rejects the dominant culture's prevailing individualism."

The church, which "too often operates under the logic of a world that it supposedly rejects," is in need of conversion, said Hillis, citing Francis. "For it is only through dialogue that the church truly can be a sign of contradiction," Hillis said.

Some speakers, while praising the encyclical, were also critical of parts of it. In her keynote address on the topic of water and an "ethic of aridity," Christiana Zenner Peppard of Fordham University said she would have liked Francis to have cited at least one of the many communities of women religious whose have long worked toward environmental justice.

Feminist theologian St. Joseph Sr. Anne Clifford of Iowa State University also raised questions about the encyclical's limited citation of women (only Mary, the mother of Jesus, and St. Thérèse of Lisieux, rather than any contemporary ecofeminists) and about its use of "mother" language when the pope quotes St. Francis of Assisi's Canticle at the beginning of the document. The "shadow side" of gendered language for nature is that it is "too weighed down by matter-spirit dualism."

The encyclical also "ignores the role societal gender patterns play in consumption of Earth's resources," said Clifford. For example, women are 14 times more likely to die in ecological disasters than men are, she said, as was the case in the 2004 Indian Ocean earthquake and tsunami in Bangladesh.

In his response to Clifford's talk, Daniel Castillo of Loyola University Maryland agreed that "we should be mindful of the manner in which even this seemingly benign term [Mother  Earth] might be freighted with sexist and exploitative undercurrents characteristic of androcentric colonial power relations."

Castillo also urged ecofeminists — those who see connections between patriarchy's exploitation of women and of the Earth — to retrieve wisdom from Catholic tradition and from Jesus by "interpreting the book of nature by reading it in light of the book of Scripture."

Another speaker, Andrew Prevot of Boston College, differentiated between "mere environmentalists" and proponents of environmental justice who prioritize the needs of the poor and oppressed. The latter, he said, "are natural conversation partners for liberation theology."

Prevot said he worried "that it may be easier for a Christian today to be attracted to the green turtle than to a darkly colored poor person who lives and dies amid the refuse of this world's racialized capitalist political economy."

Catholic Theological Society of America members also discussed divesting from fossil-fuel-producing companies, with the board gathering input from members to make a decision in the next year. "Our investment policies must not betray the social mission of the church, which includes promoting ecological responsibility," states a policy report created by an ad hoc committee that has been studying the issue since 2013.

More than 50 attendees also donated more than $700 in carbon footprint offsets, to compensate for emissions involved in traveling to the conference.

Jesuit Fr. Francis Xavier Clooney, an expert in Hinduism and the religions of South Asia, was honored for his pioneering work in modern comparative theology with the society's 2017 John Courtney Murray Award for distinguished theological achievement. Mercy Sr. Margaret Farley, a feminist ethicist, received the Ann O'Hara Graff Memorial Award for her scholarship and liberating action on behalf of women in the church and broader community.

The Academy of Catholic Hispanic Theologians of the United States, which met jointly with the Black Catholic Theological Symposium on the topics of incarceration and detention, also recognized Mercy Sr. Ana Maria Pineda, associate professor at Santa Clara University, for achievement in theological writing with its Virgilio Elizondo Award.

Next year's convention of the Catholic Theological Society of America will be held in Indianapolis. The theme is "Grace at Work in the World."

[NCR contributor Heidi Schlumpf teaches communications at Aurora University and is the author of Elizabeth Johnson: Questing for God.]