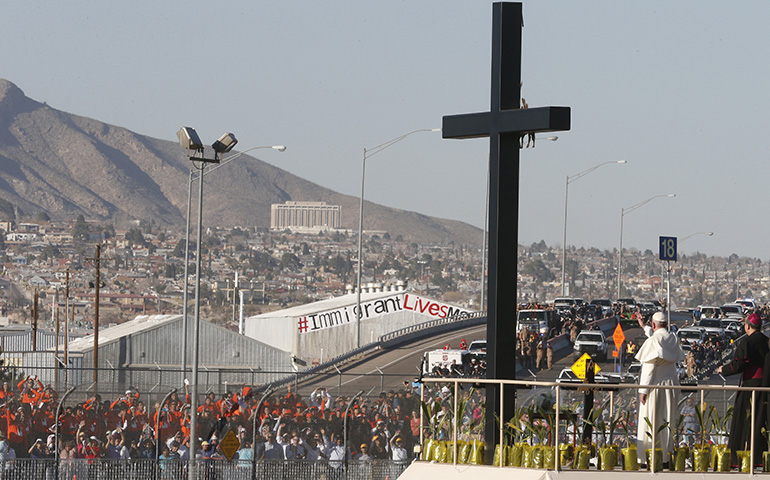 Pope Francis prays at a cross on the border with El Paso, Texas, before celebrating Mass at the fairgrounds in Ciudad Juarez, Mexico, Feb. 17. (CNS/Paul Haring)

Standing less than a football field away from the southern side of the U.S.-Mexico border, Pope Francis launched anew the biblical cry of Jonah Wednesday -- heart wrenchingly pleading for mercy and conversion of hearts towards migrants who he said suffer "grave injustices."

Moments after making an emotional visit to the southern side of the border fence -- where he prayed before a cross at the bank of the Rio Grande and raised his arm to bless those gathered to watch on the northern side -- the pontiff pleaded: "We still have time to transform what is destroying us as a people."

In a homily during a packed open air Mass in this Mexican border city, just on the other side of El Paso, Texas and long a crossing point for documented and undocumented entries into the U.S., Francis personally begged for a transformation to mercy in the name of his ongoing Jubilee Year.

Reflecting on the biblical story of Nineveh -- the city which the Lord warned Jonah he would destroy within 40 days because it had not followed God's laws -- the pope said the ancient town was saved by "men and women capable of repenting, and capable of weeping."

"To weep over injustice, to cry over corruption, to cry over oppression," said Francis. "These are tears that lead to transformation, that soften the heart; they are the tears that purify our gaze and enable us to see the cycle of sin into which very often we have sunk."

"They are the tears that can break us, capable of opening us to conversion," said the pope.

"This word echoes forcefully today among us; this word is the voice crying out in the wilderness, inviting us to conversion," said the pontiff. "In this Year of Mercy, with you here, I beg for God’s mercy; with you I wish to plead for the gift of tears, the gift of conversion."

"Let us together ask our God for the gift of conversion, the gift of tears, let us ask him to give us open hearts like the Ninevites, open to his call heard in the suffering faces of countless men and women," said the pope.

"No more death!" he exhorted. "No more exploitation! There is still time to change; there is still a way out and a chance; time to implore the mercy of God."

Francis was speaking Wednesday in his last public event on an exhaustive six-day, six-city tour of Mexico. The stop in Juarez was among the most highly anticipated of the trip, as the pontiff has called frequently for better treatment of global migrants and had said he wanted to start his visit to the U.S. last September at the border.

The decision to celebrate Mass so close to the frontier was criticized by some U.S. politicians, including Republican presidential frontrunner Donald Trump.

Last week, Trump said he did not believe Francis understood what he called "the danger of the open border we have with Mexico" and suggested the pontiff was being used politically by the U.S.' southern neighbor.

Vatican spokesman Jesuit Fr. Federico Lombardi responded to Trump's remarks Tuesday, saying the pope was not a politician but "a man who believes in Jesus Christ and his mission."

"The pope always talks about migration problems all over the world, of the duties we have to solve these problems in a humane manner, of hosting those who come from other countries in search of a life of dignity and peace," said Lombardi.

Francis' Mass Wednesday was celebrated as close to the border fence as organizers said was possible, with the altar set up less than 90 yards away at Juarez's public fairgrounds. After making a tour of the fairgrounds in the popemobile before Mass, the pontiff stopped just short of the border itself.

He walked slowly up a ramp made for the occasion, where a tall cross had been placed right at the banks of the river and prayed silently before blessing several objects and those on the northern side.

The U.S. border fence dominated the horizon of the landscape just a few steps away from the Mass site, with U.S. road signs and soldiers easily visible through the holes in the fence. A large crane was set up to fly an American flag, which flapped listlessly on a still day.

Media, immigration advocates, religious and migrants lined the El Paso, Texas, border with Juárez facing the Rio Grande. A large ramp led up to a white platform where three small crosses and a large one awaited Francis' wave. The crowd on the U.S. side -- many in uniform colored hats or t-shirts -- chanted, "Se ve, se siente; el papa está presente!" (It's seen, it's felt: The pope is present), until their chants turned to screams as the popemobile became visible.

Some 200,000 packed the fairgrounds for the Mass celebration. The atmosphere beforehand was joyous, with dancing, singing, and shouts from the crowd. People were packed shoulder-to-shoulder as far as could be seen, into the horizon, with some holding t-shirts over their heads to block the sun.

A band led the crowd with gentle guitar music, occasionally eliciting cries of lyrics from groups of people.

Francis began his homily by retelling the story of Nineveh, saying the city "was self-destructing as a result of oppression and dishonor, violence and injustice."

Recounting God's call to Jonah, the pontiff said the Lord asked the prophet to "go and help them to understand that by the way they treat each other, ordering and organizing themselves, they are only creating death and destruction, suffering and oppression."

"Go and tell them that they have become used to this degrading way of life and have lost their sensitivity to pain," Francis explained God's command.

"Go and tell them that injustice has infected their way of seeing the world," the pope continued. "God sent him to testify to what was happening, he sent him to wake up a people intoxicated with themselves."

Francis reflected on the fact that the King of Nineveh heeded Jonah's warning and adopted sackcloth and ashes as a sign of his penitence.

"God’s mercy has entered the heart, revealing and showing wherein our certainty and hope lie," said the pontiff. "There is always the possibility of change; we still have time to transform what is destroying us as a people, what is demeaning our humanity."

Mentioning migrants who wish to go to Mexico from Central America and from Mexico to the U.S., the pope described the journey: "Each step, a journey laden with grave injustices: the enslaved, the imprisoned and extorted; so many of these brothers and sisters of ours are the consequence of a trade in human beings."

"This crisis, which can be measured in numbers and statistics, we want instead to measure with names, stories, families," said Francis. "They are the brothers and sisters of those excluded as a result of poverty and violence, drug trafficking and criminal organizations."

"Being faced with so many legal vacuums, they get caught up in a web that ensnares and always destroys the poorest," he continued. Not only do they suffer poverty but they must also endure these forms of violence."

"Injustice is radicalized in the young; they are 'cannon fodder,' persecuted and threatened when they try to flee the spiral of violence and the hell of drugs," said the pope. "Then there are the many women unjustly robbed of their lives."

At the end of his homily, Francis addressed people taking part in the celebration of the Mass from El Paso, Texas, where the diocese and several Catholic organizations arranged for the event to be broadcast at the Sun Bowl so people could celebrate from afar.

"With the help of technology, we can pray, sing and celebrate together the merciful love that God gives us, and that no border can prevent us from sharing," said the pope. "Thank you, brothers and sisters in El Paso, for making us feel as one family and one, the same, Christian community."

Francis is concluding a six day visit to Mexico Wednesday. While in the country, the pontiff has traveled to different communities in the south, west and north, speaking to particular concerns facing each region.

In the southern state of Chiapas Monday, where many of Mexico's indigenous peoples live, the pope decried their historic treatment by Spanish and then Mexican governments -- saying they had been "misunderstood and excluded" from society and treated inferior to others.

In the central city of Morelia Tuesday, which has been wrought by destruction by drug cartel violence, the pontiff movingly asked Catholic priests and religious to not give up on building a better society even in the face of "paralyzing injustice."