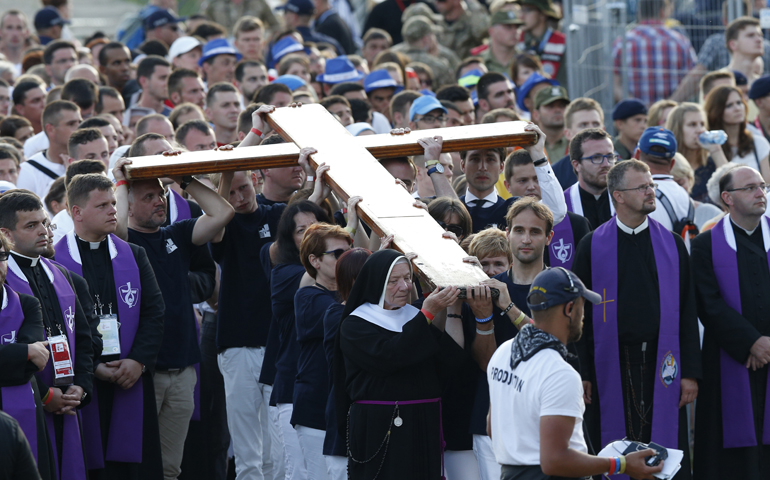 Tens of thousands of global youths reimagined the traditional Catholic way of the Cross for Pope Francis on Friday, remembering not only the painful last moments in the life of Jesus Christ but enacting scenes showing how his suffering continues in peoples' lives today.

Using dramatic dance to show the separation caused by imprisonment and even a rock-climbing wall to equate the need to forgive each other's offenses to getting up after you fall down, the youths presented the pontiff with what they called "The Way of Mercy."

As they carried a large wooden cross through Krakow's Blonia Park, they tied each of the traditional 14 Stations of the Cross to a corporal or spiritual work of mercy -- from feeding the hungry and comforting the afflicted to counseling the ignorant and bearing wrongs patiently.

They started the event by tying the condemning of Jesus to death to the need to shelter pilgrims, who they identified today as migrants entering Europe to flee war and violence. Among those carrying the cross at the first station were two Syrians living as refugees in Italy.

"Lord Jesus, at the beginning of your journey to Jerusalem, and thus to death, you were rejected," the youth read aloud. "They would not welcome you because you were a stranger, because you belonged to another nation, professed a different religion."

"All of this, Lord, sounds frighteningly familiar — as if taken straight from our newspapers, reminiscent of the situations on our own streets," they continued. "We refuse to welcome people who are looking for a better life, who are sometimes just fending for their lives, under the threat of death, who knock on the doors of our countries, churches, and homes."

"Instead of hospitality, they find death: on the coasts of Lampedusa and the Greek islands, in crowded refugee camps," they stated. "We ask: Open our eyes! Allow us to recognize you!"

Contrary to other large events at World Youth Day, during which the crowd chanted loudly and cheered the speakers throughout, the mood during the Stations of the Cross was more reserved. Many in the crowd kneed in reverence, and all were relatively silent.

Francis replied to the young peoples' inventive display with a short but wide-ranging reflection on the nature of good and evil and God's role in the world. Taking up the youths' emphasis on how people continue to suffer today, he started by asking several times how God could possibly be found in this suffering.

"Where is God, if evil is present in our world, if there are men and women who are hungry and thirsty, homeless, exiles and refugees?" the pontiff asked aloud. "Where is God, when innocent persons die as a result of violence, terrorism and war?"

"These are questions that humanly speaking have no answer," said the pope. "We can only look to Jesus and ask him. And Jesus’ answer is this: 'God is in them.' Jesus is in them; he suffers in them and deeply identifies with each of them."

"By embracing the wood of the cross, Jesus embraced the nakedness, the hunger and thirst, the loneliness, pain and death of men and women of all times," said Francis.

Then, recognizing the Syrians who took part in the enactment of the first station, the pope said: "Tonight Jesus, and we with him, embrace with particular love our brothers and sisters from Syria who have fled from the war. We greet them and we welcome them with fraternal affection and friendship."

"In welcoming the outcast who suffer physically and welcoming sinners who suffer spiritually, our credibility as Christians is at stake," he continued, adding: "Not in ideas!"

Francis later told the youths that if they wish to follow Christ they must live lives of service.

"In the face of evil, suffering and sin, the only response possible for a disciple of Jesus is the gift of self, even of one’s own life, in imitation of Christ," said the pontiff. "It is the attitude of service."

"Unless those who call themselves Christians live to serve, their lives serve no good purpose," he said. "By their lives, they deny Jesus Christ."

Friday's way of the Cross was one of the many events taking place in Krakow this week for the 14th World Youth Day, which has brought Francis to Poland. Organizers expect up to 2 million pilgrims for the final events of the gathering, which will culminate in an open air Mass with the pope on Sunday before he heads back to Rome.