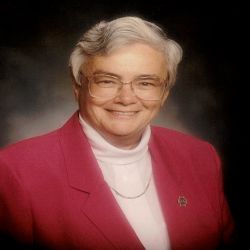 Sister Dolores Marie McHugh, BVM, who served as president of the Sisters of the Blessed Virgin Mary congregation, died April 24, 2020, in Dubuque, Iowa. She was 87.

She served the congregation as first vice president before becoming president in 1992.

Dolores brought her love of God, passion for religious life, intense love for each sister, compassion, and caring to leadership. She affirmed people and empowered them to become their best selves.

Dolores’ conviction that women religious can make a communal difference in the world was shared in the Leadership Conference of Women Religious, where she chaired Region X and was a national board member. The leaders respected her clarity, organization, and capacity to relate while simultaneously enjoying life and celebrating.

She had an initial desire for religious life early in elementary school, and she joined the BVM congregation at age 16, before completing high school.

Her first mission was teaching kindergarten in Chicago, where she taught 60 children in the morning and another 60 in the afternoon. She was not quite 19 years old. Dolores managed through “youthful exuberance and the grace of God,” and with a determination that the children “would have to be independent. I was not going to tie shoes.”

Later, she taught in California and Missouri.

She served as superintendent of schools and curriculum coordinator for the Diocese of Des Moines from 1976–1984. She was the only woman superintendent among the four Catholic dioceses in Iowa. Her passion for Catholic education, her work ethic–110 percent all the time–her honesty, and ability to build relationships left a legacy. These years also graced Dolores with a dynamic, supportive intercongregational living community and a Vatican II-centered diocesan leadership that was pastoral and prophetic.

She served on the Clarke University board of trustees in Dubuque for more than 20 years, on the Mundelein College board in Chicago, and on the Carmel High school board in Mundelein, Ill.

She ministered as pastoral care coordinator at Mount Carmel in Dubuque.

She is buried in the Mount Carmel Cemetery. Mass on Sunday, May 3, 2020, in the Marian Hall Chapel will be celebrated in her memory. The Sharing of Memories will be held at a future date.