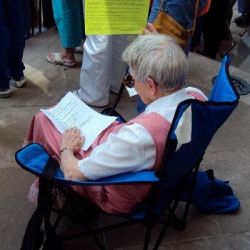 My first encounter with Miriam was inspired by an angry letter to the newspaper. A few months after 9/11, I wrote to The Courier Journal to complain about a fatuous comment that George W. Bush had made regarding Al-Qaeda and Iraq. Miriam sent me a hand-written note that encouraged me to keep writing. She said, “Our country needs to ponder the ideas you expressed before it plunges into another war.”

A few years later, she invited me to attend a meeting of local writers who belonged to the Louisville Peace Action Committee. They gathered monthly in the basement of the Iroquois Public Library to discuss whatever they had written on behalf of progressive causes. I learned that Miriam had been a vital part of the local peace movement for several decades and was a reliable fixture at protest rallies around town, including the monthly Sunday afternoon peace vigils at the corner of Bardstown Road and Douglass Loop.

My appearance at protest rallies has always been desultory and half-hearted, but one afternoon in March 2007 I drove downtown to Fourth Street, where a large crowd had gathered to protest President Bush’s appearance at the Seelbach Hotel for a fund-raiser on behalf of Mitch McConnell. I waded into the crowd of several hundred, and before long I spotted Miriam, standing alongside a storefront in her little brown parka, shaking a gourd full of seeds in rhythm with the chants that echoed in the frosty air. We clapped and shouted anti-war slogans in unison, led by a gray-bearded man with a megaphone as he strode back and forth along the street in front of us. Whenever pro-war picketers across the street began to chant, we yelled even louder to drown them out. Four police officers sat on horses in the street to keep us apart. We shouted, “No More War,” “Bush Go Home,” and other slogans left over from previous wars. When the crowd chanted, “One, Two, Three, Four. We Don’t Want Your Fucking War!” Miriam and I kept silent, though I think I detected an approving smile on her face.

When I began presiding at a weekly Mass at Spalding University, Miriam prepared the altar before each liturgy. After she retired from teaching English at Spalding, she continued to work on campus as a volunteer, reaching out to alumni and urging them to give money to the school. She knew everybody and was blessed with an encyclopedic memory, which prompted people to solicit her help in hunting down factoids about the school’s history and heritage. I often tried in vain to persuade her to write a memoir or at least to submit to an oral history interview; but she always refused and insisted that she was overwhelmed with more immediate and more urgent tasks. “I’m busier than a one-armed paperhanger,” she told me more than once.

Miriam spoke her mind without hesitation. Her diminutive stature and soft-spoken voice belied an assertive and intrepid personality. Whenever she wrote a letter to The Courier Journal that failed to show up in print a few days later, she phoned the editor and demanded to know why it hadn’t seen the light of day. After Representative Gabbie Giffords was shot and gravely wounded in Arizona, Miriam telephoned Senator John McCain’s Washington office and asked the secretary “if McCain now realizes the harm he has done this country by launching Sarah Palin on a political career.” She reminded me of Elizabeth Cady Stanton’s remark: “There’s no point in telling people what they are ready to hear.”

Miriam was one of the most beguiling talkers alive. She sprinkled her conversations with colorful idioms drawn from her Irish Catholic background. People who got in her way are “more trouble than triplets.” She often referred to her own predictions as “Corcoran conjectures” and added, “I’m living in the subjunctive mood right now. What is and what should be could get married, because they’re certainly not related.” “Like the back of the clock,” she once told me, “I’m behind time,” before rushing off to her next appointment. When she received a Tower Award in 2010, she brought down the house with her opening line: “As Henry VIII said to each of his wives, ‘I won’t be keeping you long.’”

Several years after we met, Miriam acquired a laptop computer and began learning the rudiments of the internet, from whence she dispatched an incessant stream of articles and essays to friends and acquaintances around the globe. She wrote and spoke with an urgency that could sometimes be exasperating when she tried to instill it to others. She constantly goaded me to write a letter to the editor on behalf of one cause or another. “And be sure to sign it ‘Reverend,’” she added. “That will give it more clout.” She regularly sent me stacks of books and magazines, as well as audiotapes of lectures and Irish melodies, which I was instructed to read and return as soon as possible.

She once drove downtown to deliver a stack of old America magazines, which she left for me in the sacristy of the cathedral. In her haste, she parked her car in a tow-away zone. When she emerged from the church, it had already been carted off. Supposing that the car had been stolen, she hurried back to the cathedral and asked a worshiper in the vestibule to call the police. He demurred and suggested that she had probably forgotten where she parked. When she insisted that was impossible, the man reluctantly called 911 and said, “There’s a little old lady here at the cathedral who thinks she has lost her car.” Miriam interjected, “I am not a little old lady!” She refused to be stereotyped by strangers or anyone else.

Unlike most people, Miriam didn’t grow more conservative with age. A free spirit, she remained skeptical of all institutions, both civil and ecclesial, and she had a healthy distrust of people vested with authority of any sort. A few months before she died, she telephoned me from the motherhouse at Nazareth and reported: “We are quarantined up to our ears. If they knew I go down the elevator at nine o'clock in the evening to mail letters, that wouldn't be such good news. But we don't need to burden them with that information.”

She was devoted to the Church, but she was put off by the hidebound ways of the hierarchy; and she had no time for lackeys and lickspittles, no matter how distinguished their titles or how high their miters. She often lamented that, “Too many of the younger priests are dashing headlong into the tenth century.” When she learned that an acquaintance had been made a bishop, she predicted, “He will cross every ‘T’ and dot every ‘I.’” Then she added, “But what does it mean to advance, really?”

She was devoted to the Sisters of Charity of Nazareth, of which she had been a member for many decades, often mentioned them in casual conversation and regularly attended their community gatherings at Nazareth. She fought tenaciously to keep alive the sisters’ long heritage and influence over Spalding. But she was also fiercely independent and for years lived in a small, modest apartment on Southern Parkway, where she slept on an army cot.

As the institutional church continues to implode and native-born American Catholics trample one another in their rush towards the nearest exits, Miriam remained one of the dwindling number of religious sisters who labor to keep the faith alive on a grassroots level, feeding the hungry, comforting the aggrieved, ignoring the self-important and badgering the powerful. Her life and labors remind me of the old adage: “The best place to renew the face of the earth is from the bottom of the heap.”