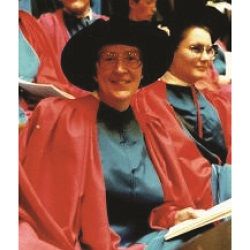 Dr. Carmel McEnroy, RSM, died Dec. 3, 2019 in Oranmore, Ireland, over a year after a cancer diagnosis. She was a member of the congregation of the Sisters of Mercy of Ireland and South Africa.

She was born in Co. Leitrim, Ireland to Agnes (Fee) and Bernard McEnroy on May 15, 1936. Carmel was the third of their seven children. Her parents, sisters Bernadette (the late Frank), Sr. Gabriel, and brother Ignatius (the late Margaret) predeceased her. She is survived by members of her Mercy community, as well as brother Brian (Ann), and sisters Noreen (Brian) and Rita (the late Padraig), as well as 20 nieces and nephews and a new generation of great nieces and nephews.

Sr. Carmel taught in Ireland and then in the U.S. where she also studied at Marillac College in St. Louis, MO, earning her B.A. in 1967. For a number of years she resided in Toronto, where she received her M.A. in 1976 and PhD in 1984 from St. Michael’s College at the University of Toronto, focusing on systematic theology. Her PhD work is titled “A Rahnerian contribution to Towards an Orthodox Theology of Apocatastasis.”

For 14 years, she was a faculty member at St. Meinrad School of Theology in Indiana, receiving tenure in 1992. She was accused of “public dissent” for being one of over 1,000 people who in 1994 signed an open letter in the National Catholic Reporter asking Pope John Paul II to reopen the dialogue on women’s ordination. Her firing in 1995 on this basis from her tenured position began a long, painful and in the end, unsuccessful search for justice through the American court system, culminating in the Supreme Court’s decision not to hear an appeal in 2000.  Her colleague, Sr. Bridget Clare McKeever, SSL, also a tenured professor at St. Meinrad, bravely resigned her own position in protest, and the Catholic Theological Society of America as well as the American Association of University Professors issued statements and resolutions supporting Carmel.

Dr. McEnroy wrote “Guests in their Own House,” a book about the women who participated in the Second Vatican Council, first published in 1996 and reissued in 2011. Her detective work, involving much travel, letter writing and archival research, long before the days of online resources and connectivity, produced the first full history of the 23 women who were Vatican II auditors. The book won a 1997 Catholic Book Award for History/Biography.

Dr. McEnroy was a visiting Lilly Professor at Berea College in Kentucky and also worked at Lexington Theological Seminary before retiring to Ireland. Her final home was with members of her Mercy community in Renmore, Co. Galway.  She will be missed for many reasons, including her sense of fun, her iron will, her love for her canine companions, and her generous and staunch support of her family, friends and community.