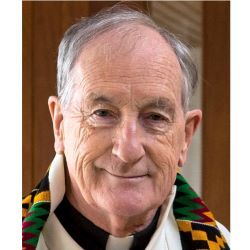 Fr. Ed Grimes, an Irish missionary priest who served in west Africa for many years, has died. He was aged 80. US-trained in Canon Law, he taught the subject in Ireland, was Canonical Advisor to his home Province and was an active member of the Canon Law Society of America.

From Cork, Ireland’s second city, Ed was educated by the Presentation Brothers. He then enrolled in university but left after a year to pursue his vocation, joining the Congregation of the Holy Spirit (commonly known as the Spiritans). Ordained ten years later in Dublin, having completed his novitiate, Philosophy and Theology studies, he had also graduated with a B.Sc. from University College Dublin and completed a year as a staff-member in St. Mary’s College, Rathmines, a Spiritan school in Dublin. Further Theology studies led to an STL from Rome’s Gregorian University. It was then his life-long commitment to the Focolare Movement began.

In 1969 Fr. Ed returned to the seminary in Dublin’s Kimmage Manor where he had done most of his formation for the priesthood, this time as a formator. He taught there for the next 5 years.

When he was in his mid-thirties, he was appointed to The Gambia in west Africa. He later remarked that, on his arrival in 1974 in the small former British colony, there was “no native Gambian priest and [only] a handful of native sisters’ but that within some 3 decades there were ‘15 native priests and as many sisters’. Founding director of the Gambia Pastoral Institute, he was a pastor in Bwiam mission for six years. During the 1980s he was Secretary General of the Episcopal Conference of the Gambia, Liberia and Sierra Leone, and Director of the Pontifical Missionary Society (PMS) for the same countries. For a period of time, he also held the position of Director of Caritas Development based in the Gambian capital, Banjul.

Fr. Ed studied Canon Law at the Catholic University of America (CUA) in Washington D.C. during the early 1990s. Florida-based Rev. Msgr. Michael A Souckar, remembering his deceased former classmate in CUA, recalled that “Ed was a voice of experience, wisdom and pastoral solicitude.  He always put people first and never was afraid to speak his mind.  He always had insightful questions and comments on the practical application of canon law.  These most often were prefaced by real stories gained from his long years on mission in The Gambia.”

A Dublin-based member of his province’s leadership team in the late 1990s and responsible for ongoing formation, Fr. Ed was Director of the PMS in Ireland for 12 years. He served on his Province’s Safeguarding Committee and Advisory Panel and, from 2011 ‘til his death, was a Director of the National Board for Safeguarding Children in the Catholic Church in Ireland.

Kind, approachable and engaging, Fr. Ed had a wide range of interests. A keen follower of world affairs, the one-time referee in rugby enjoyed that game, horseracing and other sports.

Buried in Dublin on Monday 20th April, Fr. Ed is survived by his sister Helen, brother Michael, his extended family, and confrères and colleagues to whom he had given unstinting support.