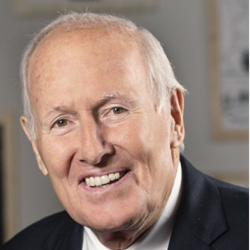 John P. McMeel, a former NCR board chair and co-founder and chairman emeritus of Andrews McMeel Universal, passed away July 7, 2021, surrounded by his loving family.

"John McMeel made friends wherever he went," said NCR publisher Bill Mitchell, who worked for McMeel for three years in the 1990s. "And he had a knack for building on those relationships to create and lead successful ventures. NCR was blessed by his service."

John was born January 26, 1936, to Dr. James and Naomi McMeel in South Bend, Indiana. As the son of the University of Notre Dame’s team doctor under Knute Rockne, growing up in the shadow of the Golden Dome was an abiding influence and helped to establish a firm commitment to faith, family, friends, and the importance of these relationships, sustained through a remarkable life.

Following graduation from Notre Dame in 1957 with a degree in business, John enrolled in law school at Indiana University. It was quickly apparent that another career would better suit his irrepressible Irish spirit and considerable talent as a persuasive and skilled negotiator. After a year in law school, he transitioned to sales as assistant manager and national sales director of Publishers Hall Syndicate in New York City, selling newspaper features. While in New York, he met Susan Sykes and they were married in 1966.

On a return visit to South Bend, John met Jim Andrews, a student at Notre Dame who was renting a room from John’s mother at the family home. This fortuitous meeting initiated a lifelong friendship with Andrews, who became managing editor of the National Catholic Reporter in Kansas City. After a few years moonlighting editing and selling newspaper features on the side — and encouraged and assisted by their wives, Susan and Kathleen — John and Jim launched their dream of establishing their own newspaper syndicate in 1970. They named it Universal Press Syndicate, thinking the name sounded impressive, in hopes of competing with corporate monoliths such as Hearst and E.W. Scripps companies, which dominated the industry at the time.

Sometimes characterized as the “ultimate salesman” (he earned the moniker “Deals McMeel” at Notre Dame), John’s energized personality helped catapult the company into one of the most influential and successful media companies in the country. After a few lean years and as the burgeoning company grew in prestige and revenue, John was met with a tremendous challenge: the untimely death of his business partner, Jim, in 1980. Undeterred, John worked through his grief and continued to honor Jim’s memory by developing and nurturing their dream.

It is hard to overestimate John’s influence on the industry and AMU’s impact on popular culture. Thanks to his shared vision, creator-first approach, and commitment to excellence, AMU features define the zeitgeist of the time, with some of the most beloved and recognizable cultural icons in recent memory. Creators, including Bill Watterson (Calvin and Hobbes), Garry Trudeau (Doonesbury), Gary Larson (The Far Side), Tom Wilson (Ziggy), Rupi Kaur (milk and honey; the sun and her flowers, home body), Dear Abby and Roger Ebert, to name a few, have one resource in common: Andrews McMeel Universal, with John McMeel at the helm. With a remarkable gift for recognizing the potential of creative talent, and an exceptional ability to successfully develop it innovatively into products and services, John’s legacy continues to inform and entertain millions after five decades.

John was a true champion of relationships — engaging and celebrating them — with family, friends, creators, associates, editors, and others, motivated by a sustained belief that people come first. Nearly everyone whom John has encountered — a distinguished roster ranging from Pulitzer Prize-winners to chance meetings — has a memorable “John McMeel story.” All who met him have been captivated by his unique and engaging charm, wit, and humor, as well as his humility, intelligence, and unwavering, contagious enthusiasm and zest for life. His passion for people, entrepreneurial spirit, and journalistic instincts served him well as the media environment continued to evolve, and as the company grew, he ensured that a family-oriented culture thrived as well. From the mailroom to the boardroom, John made all feel welcome and valued.

A vocal and involved supporter of Kansas City, John was extremely proud that AMU flourished in the Midwest in general, and in this city in particular. His contributions in the civic arena are exemplary. He has been a member of the board of directors of the Harry S. Truman Presidential Library and Museum, the William Allen White Foundation Board of Trustees at the Journalism School at the University of Kansas, the Board of Trustees of St. Luke’s Hospital Foundation, and the UMKC Board of Trustees. He was a vibrant advocate of Rockhurst University, through the McMeel Family Gallery featuring framed original strips depicting interpretations of learning, leadership and service, and the McMeel Faculty Institute on Service Learning, among other projects.

In addition, John was a co-founder of Christmas in October, an intensive annual two-day renovation project designed to improve the living conditions of the elderly, disabled and needy in Kansas City. Thousands of homeowners have benefitted from the work of thousands of volunteers in Christmas in October’s 37-year history.

He was an executive board member of the International Press Institute, and a board director of the Federal Association of the Sovereign Military Order of Malta. The Sovereign Council awarded him the Cross of Merit Pro Merito Melitensi, given to members and volunteers who have done extraordinary work for the Order in serving the poor and the sick, for his valuable work through Christmas in October.

Additional accolades include recognition as a Caring Institute Awardee (1991), International Relations Council Award for Contributions to the Community (1998), the Human Relations Award from the Jewish Community Relations Bureau/American Jewish Committee (2002), co-recipient of Rockhurst University’s Father Van Ackeren Spirit Award (2002), the John J. Sullivan Jr. Foundation Humanitarian Award by the Irish Museum and Cultural Center of Kansas City (2003), and with Susan, the Marion and John Kreamer Award for Entrepreneurship in Volunteer Community Service from the UMKC Henry W. Bloch School of Business and Public Administration (2009). In 2015, the Indiana Journalism Hall of Fame named John as the first recipient of its John P. McMeel Distinguished Award, subsequently given periodically to an individual who has contributed to the advancement of journalism in Indiana. He was named one of the 50 most influential people in Kansas City by Ingram’s Magazine (1994) as well.

John’s contributions to Notre Dame were significant, and enduring. He was a member of the Advisory Committee of the John W. Gallivan Program in Journalism, Ethics and Democracy, and the Advisory Council of the College of Arts and Letters. He established the McMeel Family Chair in Shakespeare Studies; the McMeel family sponsors the annual Red Smith Lecture Series; and he was honored with the Edward W. Sorin Award in 1997, bestowed to a distinguished alumnus to commemorate the university’s founder.

In 1981, after Jim’s death, John established the James F. Andrews Endowment and the James F. Andrews Memorial Scholarship Fund with Kathleen to launch and sustain the Summer Service Learning Program at the University of Notre Dame. Thousands of Andrews Scholars across the country have participated in the program since its inception.

Although John delighted in an exhilarating career, his greatest joy was time spent with his family. The family enjoyed many trips across the nation and the globe, and John was a staple on the sidelines cheering his grandchildren as they engaged in numerous academic and athletic pursuits, and at many football weekends cheering on the Fighting Irish. Warm, gracious, generous — the adjectives and accolades surrounding John are abundant.

Mass of Christian Burial will be held Thursday, July 15th at 3:00 pm at Our Lady of Perpetual Help Redemptorist Church, 3333 Broadway Blvd, Kansas City, MO 64111. Private family burial will be at the University of Notre Dame at a later date. Charitable contributions in John’s memory may be made to Christmas in October, 3261 Roanoke, Kansas City, MO 64111, christmasinoctober.org.