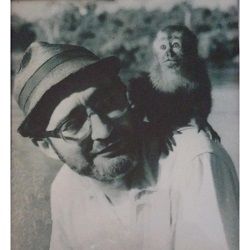 Joseph Lawrence Boudreau, or Larry as most people know him, was born in Bennington Township, Michigan on November 8, 1931 to Joseph Duncan and Regina Boudreau. He passed peacefully into the arms of our Lord on Sunday, July 7th, 2019. He was met by his parents, his siblings and their spouses, John Boudreau (Adeline), Yvonne Allen (Bruce), Charles Boudreau (Kathy), his little sister Josephine Boudreau, extended family, and countless friends.

Larry lived a full and rich life, filled with the love of many family and friends. He touched the lives of so many, but will especially be missed by his wife of 44 years, Carmen Casas Boudreau, his children and their spouses: Angelica Boudreau Cox and Paul, and John Boudreau and Katherine, and his grandchildren: Elijah John Larson, Lukas Duncan Boudreau, Samuel James Larson, Wesley Azuma Cox, Liam Adam Cox, Elisa Nicole Cox, Betania Miranda Cornejo, and Gabriela Simonne Boudreau.

Larry was a man of great faith and conviction who loved God with his entire being. He stood fast to the principle that God loves all of us, and so we should love all human beings. The notion of serving others and helping the less fortunate was his life’s mission, and is what guided his life and his adventures. He was inspired as a young boy by his mother’s kindness and generosity to homeless travelers during his depression era childhood. Because of this, and the desire to better his education, he entered the seminary at 11 years old, and chose the priesthood as his vocation.

As a young priest, Fr. Larry’s devotion to working with the poor and educating himself about why poverty exists led him to South America where he was a missionary for nearly 20 years.  His focus was always in combating the imperialist factors that sustain systemic poverty.  For this he was applauded by some and demonized by others.  Throughout his adult life he always made the clear distinction that he was a follower of Jesus of Nazareth, the humble servant to the people; not Christ the King, an extension of the Emperor Constantine’s Roman empire.

In the early 1970’s he met a young social worker and he retired from the priesthood and married Carmen Casas. They returned to the United States in 1976, and he continued his mission first managing immigrants in an oil field in Alvin, Texas, then teaching Catholic missionaries preparing to serve in Central and South America at the Mexican American Catholic College in San Antonio, hosting his own TV show, Mending a Broken World, on Catholic Television San Antonio, and later working with Maryknoll Missionaries.  He also wrote two books, “Don’t Call Me Out of My Name,” (2002), and “Telling It Like It Is,” (2008).

Towards the end of his life Larry reiterated that he is leaving this “tinker toy world” to become part of the real world. He named it that because our world is full of possessions and toys, and like tinker toys they easily come apart because there have no real substance.  Often in this world we are focus on collecting more and more toys that contain little to no real substance. The real world is with God, and that’s where he is now. His last few days he constantly said, God is love and that we all have love in us; so therefore we all have God in us. His hope was to share that with the world, so everyone knows God is with them.  He left this world with no fear or regret.  He left this world better than he joined it.  He is now and always will be with us.