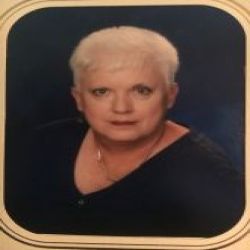 Mary Helen Madden, 75, passed away peacefully in her sleep on September 12, 2019,  in McLean, Virginia, following a decade-long decline from Alzheimer’s Disease.  She was born in Cleveland, Ohio on August 18, 1944, the first child of David John Madden and Mary Agnes Deighan.  She graduated from the Convent of the Sacred Heart, El Cajon, California, and later received her Bachelor’s degree in political science from Seattle University.

Inspired by President Kennedy’s call to public service, she joined the Peace Corps, working in community development in a rural village and at an orphanage in Istanbul, Turkey.  In the years that followed, Mary Helen fell in love with travel, both domestic and international, and became a true globe-trotter.  She joined the USO, directing programs in  Thailand, Malta, Italy, France, and Iceland.  On one occasion, while in Malta, she met a young Paul Newman when he was dining at the same restaurant as she.  In the years that followed, she loved telling the story of how they met and how kind and gracious the actor was to both her and her dinner companions.

Mary Helen lived for a time in Arlington, Virginia, where she bought her first home.  She was Executive Director of the National Council of Catholic Women, and led the North American delegation to the International Congress of Catholic Women in India. She moved to Philadelphia, Pennsylvania, where she was Executive Director of Soroptomist International of the Americas. For many years she managed corporate events for Mellon Bank.  She reveled in the travel opportunities and celebrity meetings that this position afforded her. In the late 1990s, she returned to her home in Arlington, Virginia and founded her own successful meeting and event planning business, MHM Events.  She was appointed by President Jimmy Carter to the President’s Advisory Committee for Women, and served as a delegate to the International Women’s Conference. She stitched exquisite needlepoint, enjoyed Scrabble, hot air balloon rides, and supporting various Democratic causes.

A truly generous spirit, Mary Helen delighted in being an aunt to her younger sister’s children in San Diego, California.  She began a tradition of gifting each of them with a 2-week trip to the East Coast after each one completed 8th grade.  She loved introducing her nephew and two nieces to different restaurants and new foods, both when they visited her and when she visited them in San Diego.  Knowing how much her niece dreamed of attending college on the East Coast, she gifted her with a 2-week college tour through Pennsylvania, New Jersey, Massachusetts, and Vermont.

She was an adjunct instructor in the International Institute of Tourism Studies at George Washington University and taught Events Management for Fundraising at the University of Pennsylvania College of General Studies.

She was a member of Our Lady Queen of Peace Church in Arlington, Virginia, and until her illness, was active in social justice ministry.

Mary Helen was preceded in death by her parents, David and Mary Madden, and her brother Kevin.  She is survived by her sister Therese (Beaverton, Oregon); her sister Sheila and brother-in-law Edmond Bridant (Santa Rosa, California); her niece Sara and her husband Alan (Aylesbury, England); her nephew Jonas and his wife Laura (Los Angeles, California); and her niece Rachael and her husband Bob (Fairbanks, Alaska).

In lieu of flowers, the family requests that donations be made to Cure Alzheimer’s Fund or the Alzheimer’s Association.