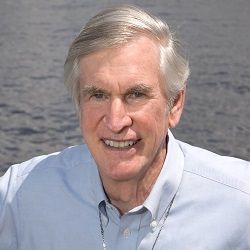 The Reverend Dr. Francis Scott MacNutt, a beloved leader in the worldwide Catholic Charismatic Renewal and an ecumenical leader in healing prayer ministry, died January 12, 2020 after a short illness. Francis was born in St. Louis, Missouri on April 22nd, 1925 to portrait painter J. Scott MacNutt and ballerina Agnes Cady MacNutt. He was predeceased by his younger sister Alex Usher (Rich).

Francis inherited his parents’ creative talent and sharp intellect and went on to study at Harvard University. His education was interrupted by World War II, during which Francis joined the Army Medical Corps and was stationed at Fort Crowder, Missouri for two years. After his service, he returned to Harvard and completed a degree in English, graduated with honors, and then studied for a master’s degree in Speech and Drama at Catholic University of America in Washington D. C. During his time at Catholic University, he found inspiration in Thomas Merton’s The Seven Story Mountain and felt a call from God to the priesthood.

He was ordained as a Dominican priest in 1956 and completed his Ph.D. in Theology from Aquinas Institute of Theology where he excelled as a professor of preaching. With an extensive background in speech and drama, and gifts in preaching and communication, he was elected President of the National Catholic Homiletics Society and founded the journal Preaching in 1965. He also authored the book Evaluating Preaching Effectiveness and held seminars on preaching throughout the United States.

In 1967, Francis’ life took a dramatic and unexpected turn when he experienced the Baptism of the Holy Spirit at a Camp Farthest Out conference. That conference became the watershed event of his life. There he met Agnes Sanford, a pioneer in the healing prayer and pastoral care movement, who became his mentor, and Rev. Tommy Tyson, a Methodist minister and leader in the Charismatic movement, who became his lifelong friend. Tommy traveled with Francis and his ministry team throughout the world on healing missions. Francis founded Merton House in St. Louis, a non-profit ministry that focused on life in the Holy Spirit and healing prayer, as well as living with and among the poor.

Francis possessed a unique ability to lovingly bridge the gap between Christian groups, and his gifts of compassion and healing made him a beloved speaker in both Catholic and Protestant circles. With a team of teachers, that included both men and women, he traveled worldwide with a message of God’s love through healing prayer and life in the Holy Spirit. Francis was a featured speaker at all the major conferences of the Charismatic Renewal. In 1974, he wrote Healing, a book which has been used throughout the world by churches, seminaries and lay people. It has become a classic text on all aspects of the ministry of healing prayer. He went on to write seven more vital books dealing with the history, theology and scriptural foundations of healing.

In 1975, while speaking at the World Conference on the Holy Spirit in Jerusalem, Francis met Judith Sewell, a psychotherapist and missionary who was leading a local house of prayer. They crossed paths several times over the next few years and formed a strong friendship. Realizing that their friendship had become a significant source of life and love for them both, they sought the will of the Lord in prayer and counsel and in 1980 they married.

Francis and Judith’s complimentary gifts and passion for the healing ministry made them a very effective husband and wife team in life and in ministry. They founded Christian Healing Ministries in 1980 in Clearwater, Florida. Then in 1987, at the invitation of Bishop Frank Cerveny of the Episcopal Diocese and his wife Emmy, they relocated to Jacksonville, Florida. Christian Healing Ministries has been an international center for ministry and training for 40 years, holding great influence among clergy and lay people of all denominations. In the mid-2000s, about 500 Catholic charismatic priests and lay leaders from the worldwide Catholic Charismatic Renewal (50 countries) journeyed to Jacksonville to learn from Francis and Judith in the Schools of Healing Prayer. Christian Healing Ministries has educated and trained thousands as prayer ministers through their ongoing School of Healing Prayer.

Francis adored his wife Judith and delighted in being a father to their beloved children, Rachel and David, to whom he imparted wisdom, encouragement and faith. Together as a family, they grew in the shelter of one another, always loving with His love and forgiving with His grace. During his final weeks, Francis was comforted by the surrounding love and prayers of his family and devoted friends.

Francis was a pioneer in his field who dedicated his life to restoring the legacy of healing to the Church. His extraordinary wisdom and deep compassion for all who are suffering will be greatly missed.

A celebration of life memorial service for Francis will be held at St. John’s Cathedral in Jacksonville, FL on Sunday, February 9 at 3:00 pm, to be followed by a reception.  All whose lives were touched by this humble servant of Christ are invited. In lieu of flowers, the family has requested that contributions go to Christian Healing Ministries, 438 West 67th St. Jacksonville, FL  32208 or donate online at www.christianhealingmin.org.