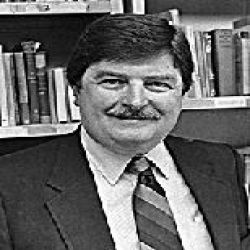 In 1984, after Publisher Bill McSweeney took the helm at NCR, he purchased the respected, but then dormant Sheed & Ward book imprint from Andrews McMeel Publishing. He then asked Heyer to head the new division.

Heyer quickly began to channel his creative energies into reprinting books from Sheed & Ward’s formidable backlist of classics. Heyer also began to publish titles by leading Catholic authors, placing an emphasis on publishing books and newsletters with a pastoral bent.

During his time at Sheed & Ward, Heyer worked closely with his wife, Jean Marie Hiesberger, another long time Catholic educator. Hiesberger passed away in 2017.

NCR sold the Sheed & Ward imprint in a company restructuring in 1997.

In 2002, Heyer received the Catholic Book Publishers Association’s Lifetime Achievement Award, in recognition of “more than three decades of creative leadership and service to Catholic adult faith formation and publishing,” highlighting his “inspirational tenacity to giving voice to those whose ideas have made a tangible difference within the ministering Church in the modern world.”

Heyer was born April 26, 1932 in Jersey City, NJ and attended Fordham University and Woodstock School of Theology, with additional studies at Columbia Teacher’s College. He spent 20 years as a Jesuit of the New York Province, teaching theology, Latin and English at Fordham Preparatory School and Regis High School.

From 1971-1984, before coming to NCR, Heyer served as a senior editor for Paulist Press. There he developed the Renew program, served as managing editor for New Catholic World and acquired nearly 400 books. During his time there he also co-founded, with his wife, Jean Marie, the Community for Bread and Justice, which endures to this day.

Condolences may be expressed at https://burkefamilyfuneralhomes.com/