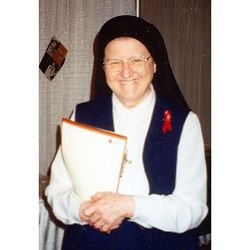 Velia Elena was born in Rupert, Idaho on October 15th, 1929 to Angela (Steneck) Zampedri and Joseph Zampedri; she had eight siblings. She is survived only by her brother Duane Zampedri.

In 1947, Velia graduated from Rupert High School in Rupert, Idaho. She then entered the Maryknoll Sisters Novitiate in Valley Park, MO (from St. Nicholas Parish in Rupert) on October 31st, 1947. At her Reception ceremony, she received the religious name Sister Genevieve Tresa.  Sister Genevieve made her First Profession of Vows on May 8th, 1950, in Valley Park and her Final Profession of Vows in Bolivia on the same day in 1953.

She was assigned to the Maryknoll Sisters Center in Maryknoll, New York after making her First Profession of Vows, where she studied dietetics and earned an Associate of Arts Degree from Westchester Community College in 1952. Sister Genevieve then received her first overseas mission assignment to Bolivia after earning her degree, there she studied language for six months. After language study, she worked at the hospital in Riberalta as a dietician, she also taught in the grade school and high school in San Jose.

In 1961, Sister Genevieve Tresa returned to the Maryknoll Sisters Center, New York where she studied part-time at Maryknoll Teachers College and gave service working in various departments where help was needed: the kitchen, housekeeping, nursing home, portress, laundry and infirmary.

From 1974-1981, she joined the U.S. Mission Region and moved to Monrovia, California to the Maryknoll Sisters Retirement home; there she assisted the elderly Sisters. In 1982, Sister Genevieve returned to the Maryknoll Sisters Center, New York due to health needs, but still remained an active volunteer around the center. In 2006, she fully retired.