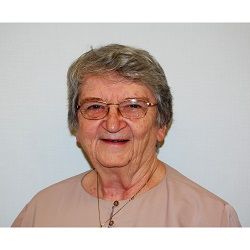 Maryknoll, NY: Sister Joan Chatfield died on March 1st, 2019 in Oahu, Hawaii. She was 86 years old and had been a Maryknoll Sister for 68 years.

Joan was born in Elizabeth, NJ, on October 7th, 1932 to Angela (Mc Cahill) Chatfield and Henry Summers Chatfield.  She had two sisters, Olive and Mary.  Her parents and sisters have predeceased her.

In 1950, Joan graduated from Mount St. Dominic Academy in Caldwell, NJ. She then entered the Maryknoll Sisters Novitiate in Maryknoll, NY on September 6th, 1950 from St. Aloysius Parish in Caldwell, NJ (Diocese of Newark).  At her Reception she received the religious name, Sister Dominic Rosaire. She made her First Profession of Vows on March 7th, 1953 at the Maryknoll Sisters Center, NY and her Final Profession on March 7th, 1959 in Honolulu, HI.  She returned to her baptismal name Joan, after Vatican Council II.

Sister Joan studied at Maryknoll Teachers College from 1952 - 1953 and Manhattanville College from 1953 – 1956, where she earned a Bachelor of Arts Degree in Biology and Chemistry. She was then assigned to Hawaii where she spent the next 36 years teaching high school religion, biology, and chemistry.

Over the next 30 years, Sister Joan dedicated her life and ministry to ecumenism and bringing people of all faiths together in Hawaii. From 1980-2010, she served as Executive Director of the Institute for Religion and Social Change which included: Chair of the Diocesan Commission on Ecumenism in the Diocese of Honolulu; NADEO (National Association of Diocesan Ecumenical Officers);Faiths in the World Committee, and Institute for Religion and Social Change. In 1983, she went back to California, this time for her graduate studies at the Theological Union – Pacific School of Religion in Berkley, CA.  There she earned a Doctor of Philosophy Degree.

After earning her Doctorate, she returned to Hawaii once again. From 1989-1997, Sister Joan taught two classes at Chaminade University in Honolulu and was also their Dean of Humanities and Fine Arts.  From 2003 – 2019, she served as President of three groups in Hawaii: CWUH (Church Women United); ABN (All Believers Network); GYCH (Global Youth Center).

On February 13th, 2009 she was among five who were named as “Living Treasures of Hawaii” for their contributions to Hawaii’s distinctive cultural and artistic heritage.

Burial will be at 2:00 pm at Diamond Head Memorial Park.