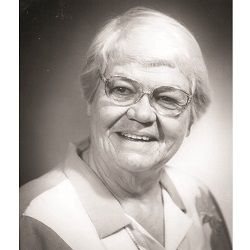 Joan Crevcoure was born in Green Bay, WI on October 12th, 1926 to May B. (Fortier) Crevcoure and J. M. Crevcoure. She had one brother and one sister, both of whom have predeceased her.

Joan attended West High School in Green Bay, WI from 1940-1944. Following graduation, she attended Rosary College in River Forest, IL from 1944-1946. She then entered the Maryknoll Sisters Novitiate in Maryknoll, NY on October 5th, 1946 (from Annunciation Parish of the Green Bay Diocese). She made her First Profession of Vows on April 6th, 1949 at the Maryknoll Sisters Center, Maryknoll, NY and her Final Vows in Hawaii on April 6th, 1952.

Sister Joan received her first teaching assignment at St. Anthony School in the Bronx, NY from 1949-1950. The rest of her missionary life was spent between Hawaii and Majuro in the outer Marshall Islands.

In 1950, Sister Joan was assigned to the Maryknoll Grade School in Punahou, HI where she taught until 1961. She then transferred to St. Michael’s School in Waialua, Oahu and spent one year teaching there. In 1962, she moved to Majuro in the Marshall Islands to teach in Junior High School and serve as Principal of Assumption Elementary School until 1969.

Sister Joan returned to the Maryknoll School in Punahou, HI once again, but this time to serve as Administrator of the Elementary and Junior High School until 1972. She then spent the next 22 years serving in the Marshall Islands where she helped form basic Christian Communities. Her pastoral work involved: helping develop two small elementary schools, creating CCD Programs for children, and training adults to be prayer leaders, religious education instructors and elementary school teachers.

In 2004, Sister Joan returned to the U.S. to retire at the Sisters Center in Monrovia, CA. During this time, she remained active and did volunteer work in the local community. She also wrote and published a book called, Ocean Pathways, the story of the Maryknoll Sisters mission work in the Marshall Islands.  In 2015, she relocated to the Maryknoll Sisters Center, Maryknoll, NY.

A Vespers service will be held for Sister Joan on Sunday, November 3rd, 2019 at 4:15 p.m. in the Chapel of the Annunciation at the Maryknoll Sisters Center.

Sister Joan has generously donated her body to science.