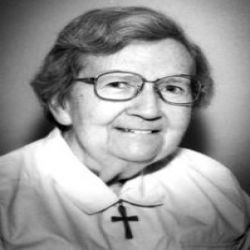 She was born in Eddington, PA on July 28th, 1928 to Dorothy R. (Smith) Tryon and William A. Tryon. She had two brothers, William and James and two sisters, Gertrude and Dorothy. Her parents and sister, Dorothy have predeceased her.

Margaret attended Nazareth Academy High School in PA and graduated in 1946. After graduation, she worked from June-September as a Bookkeeper and Clerk at her father’s company, William A. Tryon Company in Croydon, PA. From 1946-1947, she worked as Timekeeper at John J. Nesbitt Incorporated in Philadelphia, PA.

In 1950, Sister Margaret attended Westchester Community College in Westchester County, NY. There she earned an Associate of Arts Degree in Applied Sciences with a Major in Food Service Administration in 1952.

Sister Margaret was assigned to Hawaii in 1953 to teach Home Economics and English at the Maryknoll School in Punahou until 1957. From 1958-1962, she was assigned to Majuro in the Marshall Islands where she taught 5th Grade. In 1962, she returned to Maryknoll, NY to study at Maryknoll Teachers College, there she earned a Bachelor of Science Degree in Education in 1963.

Sister Margaret returned to the Hawaii Region after earning her Bachelor’s Degree; there she taught in various grade schools on Oahu and Maui and Majuro in the Marshall Islands until 1970.

From 1971- 1972, she gave service at the Maryknoll Sisters Center, NY as a liaison to the Food Services Department.  She then returned to the Marshall Islands, to teach part time, organize an in-service teacher training program for Micronesians, and was also involved in radio training until 1974.

From 1975-1997, Sister Margaret served back and forth between Hawaii and Maryknoll, NY in various roles. In 1975, she returned to Hawaii and was teaching until 1976. She then was assigned to the Maryknoll Sisters Center for Congregational Service until 1978; when she went back to Hawaii to do Pastoral Ministry and catechetics until 1985. Sister Margaret then served as Director of Activities in the Sisters Residential Care Unit at the Maryknoll Sisters Center until 1990. In 1993, for the last time she ventured back to Hawaii to do Pastoral Ministry and Prison Ministry with women at Oahu Community Correctional Center until 1997.

In 2000, Sister Margaret retired to the Maryknoll Sisters Center, where she remained until her death.

Sister Margaret generously requested that her body be given to Science.

A prayer and memorial service was held for Sister Margaret on Saturday, February 2, 2019 in the Chapel of the Annunciation at the Maryknoll Sisters Center, Maryknoll, NY.

A Memorial Mass followed at the Maryknoll Sisters Center.