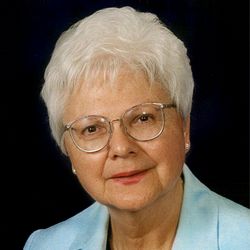 After a year of teaching in the Scottsdale, Ariz., public school system, Christine entered the congregation of the Sisters of Charity of the Blessed Virgin Mary on Sept. 8, 1955, from St. Thomas the Apostle parish in Phoenix. She received the name Christophil upon her reception on March 19, 1956, professed first vows on Feb. 3, 1958, and lived 64 years as a BVM.

Her arrival in Phoenix coincided with the formation of the North Phoenix Corporate Ministry (NPCM), co-founded by the St. Francis pastor. NPCM was a group of Catholic, Jewish, and Protestant congregations who collaborated in areas of education, liturgy, social concerns, and communication. As its executive director, Christine coordinated ecumenical activities for both clergy and laity. This ministry held a special place in her heart for its fruitful outreach and even more for the love shared within the community.

Christine was a prolific author who wrote extensively on Jewish-Christian relations. She penned several books, most notably In Quest of the Jewish Mary: The Mother of Jesus in History, Theology, and Spirituality, published in 2013. In addition, she contributed chapters to a number of books, wrote numerous magazine articles and book reviews, edited several publications, served on theological discussion panels and gave countless lectures and presentations.

She served on more than 20 boards and committees, including the Commission on Ecumenical and Inter-religious Affairs for the Diocese of Phoenix; the Committee on Jewish-Christian Relations for the Commission on Ecumenical Inter-religious Affairs of the Archdiocese of Saint Paul-Minneapolis; and the Catholic-Jewish Scholars Dialogue sponsored by the Archdiocese of Chicago, the Chicago Board of Rabbis, and the United Jewish Federation of Greater Chicago.

Recognitions include the B’nai B’rith Humanitarian of the Year Award, the Samuel H. Scheiner Human Relations Award presented by the Jewish Community Relations Council Anti-Defamation League of Minnesota and the Dakotas, and the National Conference of Christians and Jews Award. She was named to both Who’s Who in Religion and Who’s Who in America.

She was preceded in death by her parents. She is survived by siblings Catherine Athans and Cyril (Veronica) Athans, both of Fresno, Calif.; nieces; and the Sisters of Charity, BVM, with whom she shared life for 64 years.

Memorials may be given to Sisters of Charity, BVM Support Fund, 1100 Carmel Drive, Dubuque, IA 52003 or online at https://www.bvmsisters.org/support_donate.cfm.