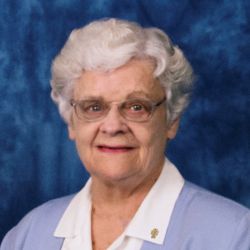 Sister Mavis (baptized Margaret Mavis) was born in Brooklyn, N.Y., on July 24, 1934, and raised in Ireland. She was of one of three children, including brothers Charles and Donal J., born to Charles Sidney and Margaret Mary (O’Donovan) Jewell. Her parents and her brother Charles have predeceased her.

Sister Mavis earned her diploma while in Ireland in 1950 and entered the Daughters of Charity at St. Joseph Provincial House in Emmitsburg, Md., in April 1959.

Sister Mavis entered the nursing program at St. Joseph College in Emmitsburg, Md., (1961-1963). She served as a nurse at U.S. Soldiers’ Home Hospital in Washington, D.C. (1963-1968) while earning her Bachelor of Arts degree from St. Joseph College (1965). While on mission in Bridgeport, Conn., where she served as a Nurse at St. Vincent Hospital (1968-1975), Sister Mavis earned her Master’s Degree in Nursing (1973) from Fairfield University in Connecticut.  After the fall of Saigon in 1975, Sister Mavis helped in the resettlement of Vietnamese refugees in Pennsylvania.

Sister Mavis spent over 50 years as a Daughter of Charity and registered nurse. Beginning in 1976, Sister Mavis served in health care up East throughout the New York region, as well as those in need beyond the United States. When Lithuania achieved independence in 1990, the first republic to break free from the Soviet Union, Sister Mavis served on the Vatican’s peace and justice committee to help hospitals get badly needed equipment and supplies.

In 2003, Sister was missioned to St. Peter’s Hospital in Albany, where she served as a Special Projects Coordinator until her retirement in 2018. Sister Mavis brought her passion for mercy and compassionate healing to many special projects, including the Prayer Shawl Ministry established in November 2005. She was gratefully known at the hospital for orchestrating prayer services and printing prayer cards when any of the St. Peter’s family suffered a loss.

In 2017, Sister Mavis, as its strongest advocate, was recognized for her efforts with the naming of the first medical respite program in the capital region, the Sister Mavis Jewell Respite Care, at St. Mary’s Hospital in Troy, N.Y. Led by the Interfaith Partnership for the Homeless (IPH) and housed at St. Mary’s in Troy, this program addresses the needs of the area’s most vulnerable patient populations – hospitalized homeless individuals who require recuperative care following discharge. Sister Mavis was passionate about helping the homeless, and was a strong advocate, fundraiser, and volunteer with IPH for more than 10 years. While at St. Peter’s, Sister Mavis also spent time working in the operating room at Albany Memorial.

Sister Mavis was essential to helping carry out projects related to Mission and community health and well-being, and she was instrumental in getting renovation projects off the ground and following through to completion. Her generous spirit was a blessing and a gift to the many people she served throughout her ministry, to her family and friends, and to her Sisters in Community.