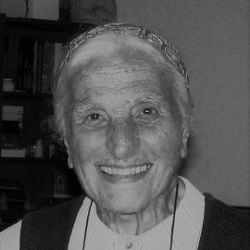 Marie Louise Trapasso was born in Niagara Falls, New York on September 23rd, 1924 to Rose (Di Ciocco) Trapasso and Dominic Trapasso.  She had two sisters, Joan Ann and Margaret. Her parents and sister, Margaret have predeceased her.

In 1941, Marie Louise graduated from Niagara Falls Public High School. She then attended New York State College for Teachers in Albany, NY from 1941 to 1945, where she earned a Bachelor of Arts Degree in Education. From 1946-1947, Marie Louise enrolled at the University of Buffalo, NY earning a Master’s Degree in Social Work. After completing her studies, she worked briefly at Catholic Charities of Niagara Falls before entering the Maryknoll Sisters Novitiate.

On September 6th, 1948 at the Maryknoll Sisters Center, Ossining, NY she joined the Sisters from (St. Joseph’s Parish, Buffalo, NY). At her reception she received the religious name, Sister Rose Dominic, honoring both her father and mother with that name. She retained that name until her death. She made her first Profession of Vows on March 7th, 1951 at the Maryknoll Sisters Center, NY and her Final Vows on the same date in Bolivia in 1954.

Sister Rose Dominic’s first assignment was to Hawaii in 1951, she lived in Nuuanu and worked at Catholic Charities in Honolulu. In 1953, she received her first overseas assignment to the Bolivia/Peru Region. She studied Spanish at Cochabamba, Bolivia until 1954, then she was assigned to Lima, Peru to work at Caritas de Lima (the social work of the Archdiocese of Lima). From 1961-1972, Sister Rose Dominic along with three Peruvian social workers and another Maryknoll Sister, Sister Rose Timothy Galvin, initiated a Department of Social Development at Caritas de Lima.  During the 1960s, she taught in the newly established School of SocialWork, affiliated with the Catholic University of Peru and supervised students studying in the National School of Social Service.

From 1973-1987, with Maryknoll Sister Rose Timothy Galvin, she co-founded a small center, Creativity and Change-to promote concern for women’s rights. In 1977, Sister Rose Dominic with two other women, set up another center- the Movimiento El Pozo, (The Well Movement).  This center was designed to work specifically with women involved in prostitution and to educate the public through written materials on the trafficking of women and girls.

From 1987-2010, Sister Rose Dominic continued to do outreach work on behalf of women in Lima. She eventually retired in Lima at the nursing home of the Religious of the Sacred Heart, where she later died.

A Mass of Resurrection, celebrated by Maryknoll Fathers Joseph Fedora and Robert Hoffmann, was held on July 15 at the Chapel of the Religious of the Sacred Heart in Lima, Peru.