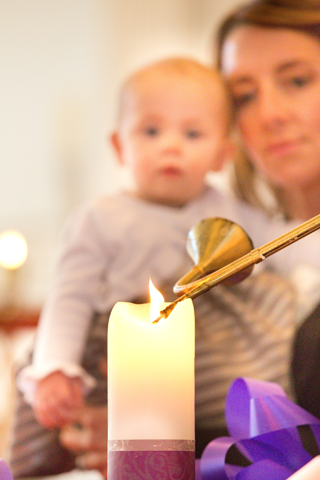 Although the four weeks of Advent focus on waiting for Christmas, the church does not just sit around and wait for the main event.

It celebrates plenty of major feasts with lots of customs, traditions and even special foods during the month of December.

Early in the Advent season, Dec. 6, the church celebrates the feast of St. Nicholas, a fourth-century bishop from the region of modern-day Turkey, well known for his generosity. The day has customs similar to Christmas but with variations: Instead of gifts placed in stockings or under the tree, they are placed in children's shoes left outside their bedroom door the previous night.

The day is celebrated differently around the world and particularly emphasized in Eastern Europe, but in the United States, it is primarily focused on the shoe custom with an added emphasis on doing good things for others.

The St. Nicholas Center in Holland, Michigan, sponsors a traveling St. Nicholas exhibit and also has lots of information on its website, www.stnicholascenter.org, on history of the feast day, ways to celebrate and the distinction between Santa Claus and St. Nicholas.

Two days after the feast of St. Nicholas, the church celebrates the feast of the Immaculate Conception, the patroness of the United States. The feast is a holy day of obligation celebrating the belief that Mary was without sin from the moment she was conceived.

The day itself does not have anything to do with Advent but was chosen as the date nine months from the date the church celebrates Mary's birth, Sept. 8.

The other Marian feast in December is the feast of Our Lady of Guadalupe Dec. 12, which commemorates Mary's appearance to St. Juan Diego in 1531 at Tepayac, a hill northwest of modern-day Mexico City. The Mexican celebration of the tradition also has been adopted by many people from Central and South America and is described as one of the most popular religious feasts for Latinos in the U.S. Many parishes throughout the country celebrate the feast day with reenactments of Mary appearing to Juan Diego. They also pray the rosary and present roses to statues of Mary, while mariachi bands sing Marian songs.

The very next day is the feast of St. Lucy, particularly observed in Scandinavian countries and Italy. Her feast day -- near the winter solstice -- and her name, which means light, has made celebrating the young girl martyred in the year 304 a festival of lights.

In festivals in Norway and Sweden, the oldest girl in the family traditionally wears a white dress, a red sash as a sign of martyrdom, and a wreath crown with lighted white candles. Other girls also dress as Lucy and walk in procession singing traditional songs and carrying rolls and cookies that are later shared.

Other major church and cultural celebrations in December take place over a number of days such as the Latin American tradition of "posadas": the reenactment of the pilgrimage to Bethlehem by Mary and Joseph in search of a room that takes place Dec.16-24. The "posadas" traditions vary but usually involve groups going to from home to home singing traditional Advent and Christmas carols and being turned down until they find one house that gives them shelter and a place to join in prayer and celebration.

The Filipino Catholic community celebrates Simbang Gabi -- a novena of early morning Masses from Dec. 16-24 in the Philippines and Dec. 15-23 in the United States. After Masses, families share traditional holiday sweets and desserts. According to the tradition, families hang lanterns on doors, windows and branches.

In most countries, including the U.S., Epiphany will be celebrated Jan. 3 in 2016. In many countries, children leave treats for the wise men and their camels and in turn, when the children are sleeping, gifts or candy is left for them.