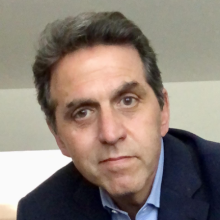 Joe Ferullo is the CEO and Publisher of the National Catholic Reporter. He had served on the NCR’s board of directors since 2018.

Before his time at CBS, Joe worked as a journalist. He was a senior level producer at NBC News, for the program Dateline NBC. He won an Emmy award as part of the NBC team covering the events of 9/11 and an Emmy nomination for his story about the children of Amer-Asian Vietnam war refugees.

He was producer or reporter for ABC News, Hearst newspapers, and Rolling Stone magazine. Joe has written essays for the Village Voice and the New York Times’ op-ed page.
In 2009, NCR published his essay about growing up in a working-class parish, titled “WhenVatican II Came to the Bronx.” For several years, he contributed to NCR and to the NCR Today blog online.

He’s a graduate of Columbia University. Joe lives in Los Angeles with his wife, Sylvia Lopez, and their two grown daughters. Sylvia was a veteran news anchor for CBS stations and is now a public health researcher at UCLA.

The church is, once again, at a crossroads

This is my first time writing for this space since I became publisher of the National Catholic Reporter just a couple of weeks ago. I'm new to the job — but I'm not new to NCR and what it means to so many people.

Mario Cuomo understood gray areas, which made him very Catholic

At odds with ourselves

Bringing attention to the 'skills gap'

Finding ways to be alone together is a new American pastime

The Prodigal Son and our times

Jesuits made a mistake in letting John Dear go

Inequality works for me!

The latest delusion of grandeur a product of TV-obsessed culture

Does increased wealth explain the decline of the West's religious fervor?

Late-night comedian's thoughtful take on popular culture something to see

A new way to measure time

Living an authentic life - but authentic to what?

As the children grow and move on, the Catholic parents stay

The value of community in today's 'everyone-is-special' America

Are American nuns still on the ropes?

A missed opportunity to celebrate a young couple