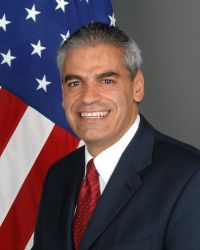 Miguel H. Díaz is the John Courtney Murray University Chair in Public Service at Loyola University in Chicago and was selected by President Barack Obama as the ninth U.S. Ambassador to the Holy See. A past President of the Academy of Catholic Hispanic Theologians of the United States (ACHTUS), in 2013, he was the recipient of their prestigious Virgilio Elizondo Award given in recognition for distinguished achievement in theology, and has been awarded honorary doctorates from a number of universities. His scholarly interests include Trinitarian theology, theological anthropology, political theology and Latino/a theology. He is a prolific writer and public speaker. His publications include books, articles and speeches. Diaz regularly contributes to efforts that bridge faith and public life. He has been a consultant to CNN, CNN en Español, Al Jazeera America, BBC News and Fox News. He has conducted interviews that have appeared in a wide selection of national and international newspapers.

A Vatican commitment to develop and build bridges will work best when students are welcomed and fully invested in further synodal encounters, dialogues and actions.

Theology en la Plaza: This synodal process invites all the faithful, in particular our leaders, to do some soul-searching. We must listen intently, especially to those who have been marginalized in Catholic spaces. Church leaders must embrace a new beginning.

A theologian and a physician talk vaccinations Latinamente

Theology en la Plaza: The impact on Latin@s of COVID-19, social distancing, and vaccination hesitancy and accessibility has been on my mind. Dr. Maximo Brito, an expert in infectious diseases, offers some perspective.

Theology en la Plaza: The next U.S. ambassador to the Holy See will be able to use shared priorities as a way to build bridges and find common ground with Pope Francis in addressing the challenges of our times.

Walking with others in an age of social distancing

Neighbors with nowhere to rest their heads

Young Leaders for Peace teach us to make room for difference

Guadalupe and the future of our common home

Are you a Christian identity card carrier?