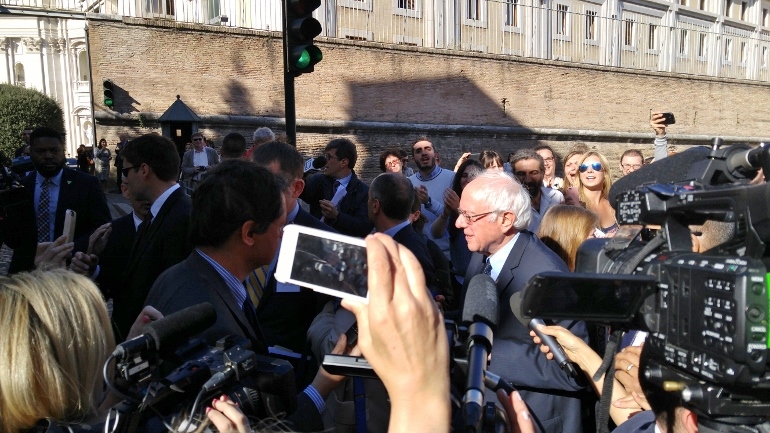 U.S. Democratic presidential hopeful Bernie Sanders embraced decades of Catholic social teaching in a brief visit to the Vatican Friday, lambasting some particularly American aspects of the global market system in a bid to match his voice to Pope Francis' cry against the "new idols" of money and wealth.

Traveling from the campaign trail and a debate Thursday night in Brooklyn, the Vermont senator spoke to a Vatican meeting just steps away from St. Peter's Basilica.

In remarks laced with references to church documents, Sanders lauded Francis' repeated call to overcome a "globalization of indifference" -- labeling it "the most powerful name to the predicament of modern society."

"I am told time and time again by the rich and powerful, and the mainstream media that represent them, that we should be 'practical,' that we should accept the status quo; that a truly moral economy is beyond our reach," said the senator.

"Yet Pope Francis himself is surely the world’s greatest demonstration against such a surrender to despair and cynicism," Sanders continued. "He has opened the eyes of the world once again to the claims of mercy, justice and the possibilities of a better world. He is inspiring the world to find a new global consensus for our common home."

Sanders was speaking Friday at an event co-hosted by the Vatican's Pontifical Academy of the Sciences and the Institute for Advanced Catholic Studies on the 25th anniversary of Pope John Paul II's 1991 encyclical letter Centesimus Annus.

The letter -- which at points argues for increased rights for workers and cries against places where they have become become "disposable cogs of the financial system" -- was itself written for the 100th anniversary of Pope Leo XIII's landmark encyclical Rerum Novarum, which is widely considered to be the first document of the church's social teachings.

Sanders' presence at the conference has been the source of some controversy, as the pontifical academy's president, Margaret Archer, initially said the candidate had asked for an invitation to come. But academy chancellor Bishop Marcelo Sanchez Sorondo later clarified that he had invited the candidate.

Questions also surfaced as to whether the senator might meet Francis during the visit. According to normal Vatican protocol, the pontiff usually only meets government officials, not those currently seeking office.

After Sanders entered the academy's Casina Pio IV, an iconic marble building behind St. Peter's where the conference is being held, Sanchez Sorondo read a letter aloud to participants from Francis explaining the pontiff could not make the event.

The pope said that his quickly planned trip for Saturday to the Greek island of Lesbos made it too difficult to make room in his schedule.

The intense media interest in Sanders' visit left the Vatican rather unprepared Friday, with several correspondents who have long been in Rome denied entry into the city-state due to apparent miscommunication over who would be allowed in.

After the senator spoke at the event, a gaggle of press several yards thick surrounded him outside the Vatican walls -- leaving some to stumble under the shuffling while others were nearly trampled.

Sanders told media he has been "enormously impressed" by the pope, who he said is giving "visionary views about creating a moral economy, an economy that works for all people not just the people on top."

The presidential hopeful particularly praised Francis recent encyclical on the environment, Laudato Si', saying that "the fossil fuel industry is literally destroying our planet" and that countries need to invest in other technologies.

Jeffrey Sachs, director of the Earth Institute at Columbia University, is also taking part and spoke alongside Sanders during the senator's brief press conference.

In remarks to the event immediately before Sanders', Correa sharply lambasted the global market economy, saying it was "intolerable" for the majority of the world's people and calling for a society "with the market system not of the market system."

Sanders began his remarks by quoting extensively from Centesimius Annus, saying the encyclical was a "clarion call for human freedom in its truest sense: freedom that defends the dignity of every person and that is always oriented towards the common good."

"There are few places in modern thought that rival the depth and insight of the church’s moral teachings on the market economy," said the senator.

"The challenges facing our planet are not mainly technological or even financial," said Sanders. "Our challenge is mostly a moral one, to redirect our efforts and vision to the common good."

"Centesimus Annus, which we celebrate and reflect on today, and Laudato Si’, are powerful, eloquent and hopeful messages of this possibility," he said. "It is up to us to learn from them, and to move boldly toward the common good in our time."

Sanders is staying Friday night at a Rome hotel and is scheduled to fly back to New York Saturday morning, where he will return to the campaign trail.

The full text of Sanders' speech is available on NCRonline.org.