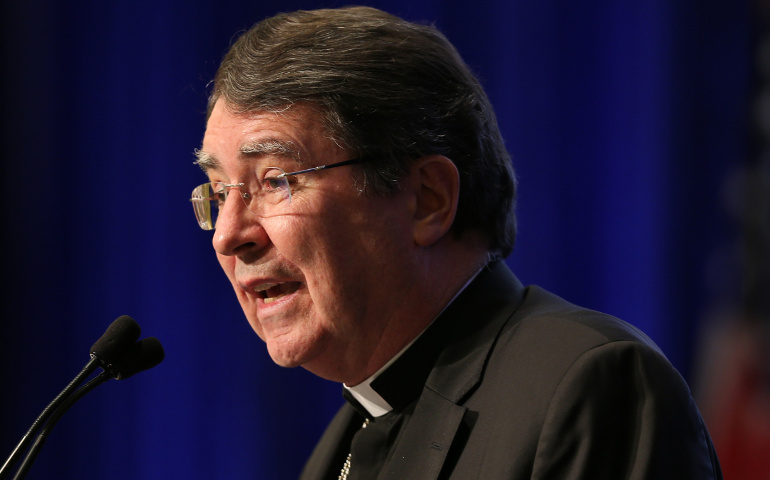 Archbishop Christophe Pierre, the new apostolic nuncio to the United States, urged U.S. bishops Nov. 14 to pay close attention to young Catholics to both learn from them and help them to deepen their faith.

"Many young people are not allergic to the truths of the faith or to the church, but they simply don't know anything or know very little about the faith," he said, urging bishops to take steps needed to help them.

The archbishop, who addressed the bishops at the start of their fall general assembly in Baltimore, also noted that it is difficult for today's young people to live out their faith in today's modern world and they need to know they are welcome in the church.

His remarks were geared to encouraging bishops to prepare for the October 2018 Synod of Bishops, which has the theme of accompanying young people on the path of faith and in discerning their vocation, announced by the Vatican this October.

"We know that youth are critical to the life of the church," he stressed, adding that they often "find themselves at the peripheries of both the church and society. We must go out to them."

This was the archbishop's first address to an assembly of the U.S. bishops since his appointment earlier this year. He said Catholics in the U.S. were still benefiting from the pope's visit last year and from experiences from the Year of Mercy.

The archbishop, who has spent 40 years in the Vatican diplomatic corps, spent most of his 30-minute address pleading with the bishops to come to understand the young people in their dioceses, noting that they "tend to place everything in the present moment" and are often in a state of constant flux and unable to make a permanent choice.

He also noted the impact of modern technology on today's youths, saying it has made them change their ways of showing their feelings and communicating, trading "virtual closeness" for real encounters.

To truly understand where young people is not only a way to reach out to them but a way to help them discern their next steps, particularly regarding vocations, he added.

Pierre stressed that in general they are "open, available and generous" and want authentic relationships and seek the truth. They want to be heard, he added, saying church leaders need to listen to them, following the example of Pope Francis.

The archbishop also stressed the bishops alone do not have the responsibility to help young people connect with their faith, because it is up to the whole church "to go to and walk with our young people."

Atlanta Archbishop Wilton D. Gregory, center, and other prelates applaud Nov. 14 after an address by Archbishop Christophe Pierre, apostolic nuncio to the United States, during the annual fall general assembly of the U.S. Conference of Catholic Bishops in Baltimore. (CNS/Bob Roller)