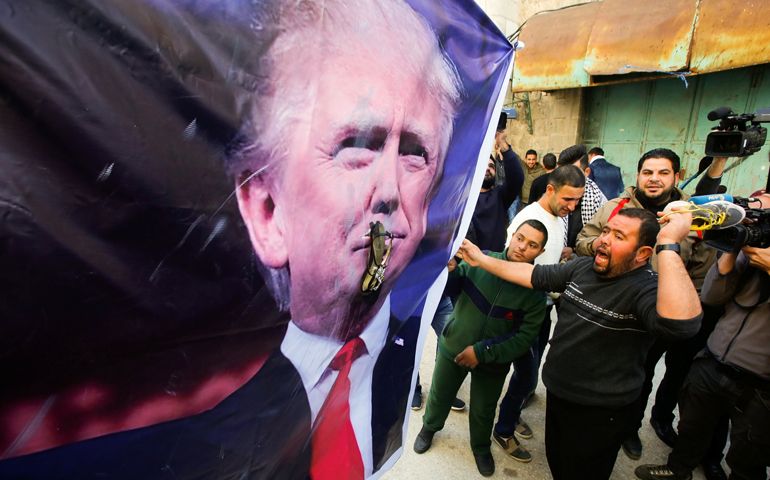 A Palestinian demonstrator throws a shoe at a poster depicting U.S. President Donald Trump during a protest in the West Bank city of Hebron Feb. 24. (CNS/Mussa Qawasma, Reuters)
This article appears in the Trump Abroad feature series. View the full series.

President Donald Trump embarks on his first foreign trip this week. What could possibly go wrong?

The president begins by visiting Saudi Arabia and Israel. He wants continued Saudi help on a range of issues, but seems not to grasp that their interests and ours do not exactly cohere: Continued instability in Iraq is just fine by them because it causes their archenemy Iran to spend time and energy protecting the Shiite people in that country. The Saudis are the font out of which Islamicist extremism grew, another fact that seems to have escaped the president although, in fairness, previous presidents knew that, but could not figure out what to do about it.

The president has voiced the opinion that achieving peace between the Israelis and the Palestinians is "not as difficult as people have thought," which is news to the Israelis and the Palestinians. For Trump, everything can be negotiated but many of Prime Minister Bibi Netanyahu’s constituents and many of Mahmoud Abbas' constituents do not believe there is anything to negotiate: They want to win it all. Can a man as shallow and superficial as Trump grasp what the word "Jerusalem" means to a Jew or what the "right of return" means to a Palestinian?

NATO was formed against the backdrop of three wars between Germany and France in under a hundred years, and in the face of an expansionist Soviet Communism. Scholars debate the degree to which that expansion was rooted in Communist ideology and how much in classic, imperialist ambition. Either way, and on both scores, NATO is one of the unqualified successes of U.S. foreign policy. I still recall my Introduction to Foreign Policy class back in 1981, and the professor said that any policy which lasts ten years and meets its goals should be counted a success. The NATO alliance has lasted seventy years and counting.

During the campaign, candidate Trump repeatedly disparaged NATO. He said it was "obsolete." But, then he had a conversion, but being unable to admit a conversion, he simply asserted that "It’s no longer obsolete." He did not disclose what had happened in the intervening six months that suddenly made the alliance relevant. The fact is that during the campaign the man would say anything that popped into his head.

Alas, this last attribute has not been shed.

This article in Foreign Policy explains why the Russians are laughing at the U.S., literally. But it is no joke. The president's lack of discipline creates a minefield for diplomats. His lack of basic historical knowledge is even worse. How can a foreign ally trust what they are told by, say, Secretary of State Rex Tillerson, or National Security Adviser H.R. McMaster when the president contradicts what they say on Twitter without thinking of the consequences? How can foreign intelligence trust the U.S. to receive sensitive information when the president, in the thrill of a conversation, shares a key piece of intelligence with the Russian foreign minister?

The Russian government under Vladimir Putin has a long-term interest in destabilizing the West, and consequently watching NATO implode, and in Donald Trump it has hit the jackpot. It is not a matter of him intentionally pursuing political objectives that Moscow wants. It is a matter of his indiscipline sowing the kind of mistrust no amount of counterintelligence spending could achieve. It is a matter of him not knowing why our allies value certain policies over others and how a casually thrown phrase can harm a government upon whom we depend for vital strategic interests.

At the G-7 meeting, the emphasis will be more on economics than geostrategy. And here is where it gets interesting. The people of Austria, the Netherlands and now France have rejected their homegrown champions of the nationalistic and xenophobic worldview espoused by Trump. But, as Harvard’s Pippa Norris recently argued, reports of the death of populism in Europe have been greatly exaggerated. She writes:

While the precise trajectory is different in each country, the trend is clear. Triggered by globalism’s economic and migratory earthquakes, and by a backlash against progressive culture shifts, populism has infected center-right parties and decimated the social democratic center-left — and it is likely to continue to gain ground, even if experiencing occasional electoral setbacks and defeats, until the underlying conditions change.

When the leaders of Europe sit down with Mr. Trump, when they consider how unbalanced the alliance has become in such a short amount of time, will they recognize that if they do not take steps to address the "earthquakes" with something better than old and failed neoliberal policies and attitudes, then Trump and his ilk represent their future too?

When the Soviet empire crashed, there was a rush of confidence in the West. Who can forget Lenny Bernstein conducting Beethoven's Ninth Symphony in Berlin in 1989, changing the word "Freude" or joy, in the final movement to "Freiheit" or freedom? Remember the tome "The End of History"?

In last year's Democratic primaries, when asked about NAFTA, Hillary Clinton fudged her answer. What she needed to do, and what Europe's leaders need to do now, is recall that sense of optimism occasioned by the fall of the Berlin Wall, and how we, as societies in the West, mistakenly placed confidence in the workings of the market to ameliorate social problems. This misplaced confidence was, as is often the case with progressives, untempered by a more realistic appraisal of the limits of human striving, in this case of markets, specifically the ethical limits. (A good reading of Augustine should have accompanied the celebrations of the fall of communism!) Having admitted that we all were mistaken, those leaders must chart a way forward, devising new policies that better enflesh the solidarity that the market does not generate, and do so creatively, not simply relying on yet more government-run social programs. There is a limit to statism as there is to libertarianism as Pope Francis reminded us a few weeks ago in his address to the Pontifical Academy of Social Sciences. Tomorrow, I will set the stage for Trump’s visit with the Holy Father.

There can be no rest while unemployment remains at ten percent, and higher for young people. There can be no more austerity programs like the one forced on the people of Greece. There must be rules that permit mom-and-pop shops to continue to flourish as they have for decades, and not be driven out of the market by larger stores, all in the name of efficiency. There is more to measuring the success of a system than efficiency! Workers must have a say and a stake in the companies at which they work. The tyranny of "fiduciary responsibility to shareholders" must end. Labor rights must become as strong in law as property rights. And on and on. The social market will require a vast set of changes in law, policy and attitude, and such changes will, in turn, require political leadership.

Having to sit down with the impetuous, unmoored, ill-educated president, let the leaders of the West consider how high the stakes are. Let them confront the limits of their own biases. It is a good thing that Emmanuel Macron is the president of France and not Marine Le Pen, but Macron must move France beyond the exhausted project of neoliberalism or next time, Le Pen will win. The same goes for the rest of the G-7. Let them look across the table and see one possible future, and let them then chart a different and more humane future.

When Pope Francis met Trump, the budget probably did not come up

The pope steps up

Economic justice: for Jesus, not just a campaign slogan

Trump's wall and the challenge of vulnerability