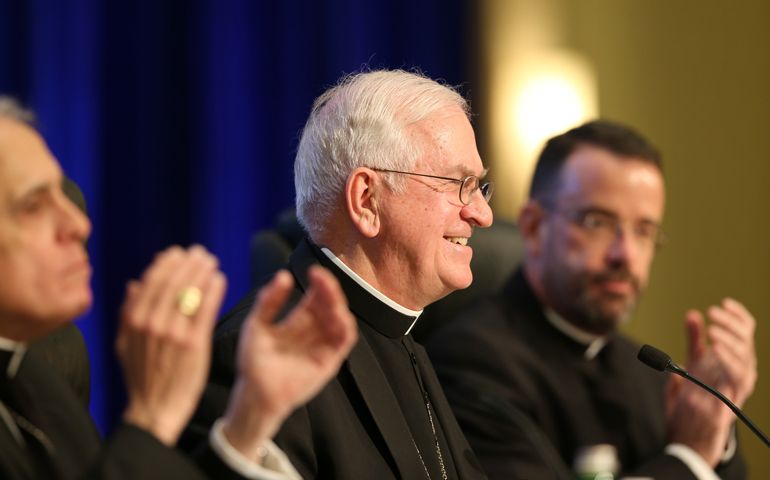 Yesterday, Archbishop Joseph Kurtz gave his last presidential address as leader of the United States Conference of Catholic Bishops. The speech, like his tenure, was a missed opportunity, reflecting an inability to bring the conference together in meaningful ways that might steer it towards relevance.

Archbishop Kurtz organized his talk around five moments during his tenure, each of which led to a lesson. He began by recalling a visit to Tacloban, Philippines, shortly after the devastating typhoon. He ran into a woman who was unconcerned about her own situation and was only focused on the good of the community. Kurtz observed: "The lesson: bishops are called always to seek the common good — an environment in which all might thrive with dignity." I am all for the common good, but it is strange to me that the archbishop had to recall a visit to another country to look for an example of it.

In the last few years, in those states that did not prefer to make an ideological point against President Obama, millions of Americans received health care through an expansion of Medicaid. This was part of the Affordable Care Act or Obamacare. No state was more successful in implementing the Medicaid expansion, and covering more poor people, than Kurtz's home state of Kentucky. But, after elections last year brought in a libertarian governor to the state, and with the election of Donald Trump as president, that health care coverage is in jeopardy for millions of America's poorest citizens. Medicaid expansion was a clear example of the common good but, of course, coming from President Obama, the bishops decided to fight it when it was enacted and instead of focusing on the good it did, engaged in a series of lawsuits to fight a relatively minor provision about paying for contraceptive insurance. The bishops have spent a lot of time and money fighting the contraception mandate. What do they have to show for it? Was that really more important than the getting basic health insurance for millions of poor people?

Kurtz's second memory recalled visiting a refugee family in Ukraine, and they had a little boy with Down Syndrome who jumped into the archbishop's lap. Lovely story. And the moral of the story was fine: "The lesson is obvious: we bishops and all who serve the Lord need also to open our hearts to the joy that others will give to us. Joy and love are not only to be given but also to be received." Now, this is better than the dark vision of a failing moral climate pictured by Philadelphia Archbishop Charles Chaput in his speech at Notre Dame last month. And, it is certainly true that bishops need to receive joy and love and not only give it. Kurtz might have tied the story to the pope's repeated call for bishops to accompany the flock and respect them and their conscience because God is already active in their lives: Evangelization is a two way street also. But, again, there was no such deeper point that was made.

He talked about going to El Paso, and meeting with unaccompanied youth in a detention center. "Our nation is on thin ice when refugee families are spoken of in the abstract," he said. "After I met the unaccompanied youth seeking reunion with their families, the issue became very clear. Surely the situations are complex but the voiceless remain anonymous unless there is a face to the voice." All true, but where was the voice of the conference on immigration reform when it mattered? Where was the pressure on the Republicans in the House to pass the bill that had cleared the Senate? Kurtz said the bishops had a message for immigrants, "we are with you," but how will the bishops be with them? The words were not up to the moment: The night before, President-elect Trump had thrown out the number "3 million" when asked how many immigrants he planned on deporting immediately. Kurtz needed to call the bishops to battle stations.

Most disturbing of the vignettes was his recalling a visit to the Little Sister of the Poor who became the face of the fight against the contraception mandate. Archbishop Kurtz continued to state the most extreme iteration of what religious liberty means, an iteration that does not actually correspond to our Catholic teaching. He said: "The lesson learned: don't allow government to define what integrity of faith means." The government never tried to "define" what integrity of faith meant. It did say: Whatever your moral views on contraception, as an employer, large Catholic institutions need to provide insurance coverage for employees of basic health care services. No one was being tied to a gurney and force fed contraception. The government has, in the past and rightly, dismissed claims to a religious exemption from government's laws, such as when southern religious organizations tried to continue racial segregation and cited the Bible to justify their stance.

The fight over religious liberty was mishandled by the Obama administration, to be sure, but it was also mishandled by the bishops and it is clear they continue to make a hash of it. Of course, religious liberty is one of several cornerstones of American democracy. But, the country just elected a man who has vowed to ban Muslims from immigrating to America and whose supporters are only too willing to intimidate the ones who have already arrived. It would have cost Kurtz nothing to say: We pledge ourselves to fight for the religious freedom of Christians in the Mideast and of Muslims in the Midwest. But, again, a missed opportunity.

The bishops' conference is at a low ebb. They have focused on marginal issues and their rhetoric against the Obama administration was so consistently hostile, they have become effectively an arm of the Republican Party, a party that has been taken over by a man who is no social conservative, a man who has made millions of immigrant children afraid for their families. Sixty-one percent of Catholics under the age of 18 are Latino. They are the future of the Catholic faith in this country, not even the future, the future is here. They are under attack. As Cardinal-designate Joseph Tobin tweeted last night: "Will US bishops meeting in Baltimore stand in effective solidarity with refugees, immigrants, people of color, the poor? Stay tuned and pray for us." There was a time when that question did not need to be asked. It is a measure of the failure of the leadership of the conference in the past few years that the question is asked and not just by us in the press, but by one of their own.

The never-ending debate on Obamacare

Is Indiana a turning point for Medicaid expansion?