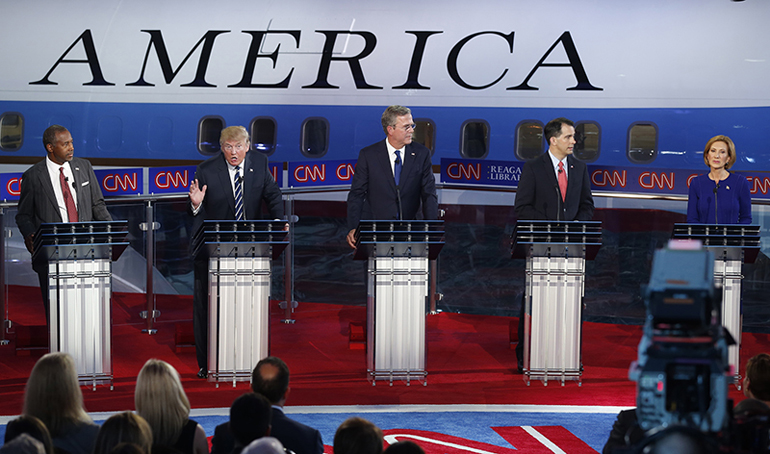 The best thing to be said about last night's Republican presidential debate is that it was only two hours. Kudos to Donald Trump and Ben Carson for insisting the American people not have to sit through another hour of this nonsense. The CNBC moderators continually lost control of the proceedings, and they kept asking questions that might work in an interview format, where it is harder to duck, but which merely seemed antagonistic in this format.

This was the first debate since Ben Carson took a lead in the polls. I had expected someone to go after him, but no one did. That was the smart move. I can’t think of a candidate who is less likely to be able to sustain his momentum than Carson. He has a Sarah Palin problem. It is not that Carson, like Palin, doesn’t know the answers to certain questions, it is that they clearly do not really understand the question. Carson looked dazed and confused most of the night.

Donald Trump, the other leader in the polls, could have dominated last night. He made no major errors. He continued his nativist rant -- and why not? It has brought him this far. But, in a discussion about the economy, he could have dominated and he should have been prepared to do so. For example, at some point, he should have asked how many jobs the other people on the stage created. Ms. Fiorina, of course, lost more jobs than she created when she led Hewlett-Packard. But, what if Gov. Chris Christie or Gov. Jeb Bush had cited the job creation numbers in their states while they were in office. Gov. Kasich did so. Trump could have pounced: “You did not create those jobs. The private sector, people like me, created those jobs.” Last night was a wash for Trump. No big hits, but no unforced errors either.

Jeb Bush took a shot a Sen. Marco Rubio’s absenteeism from the Senate, but Bush is dreadful at landing punches and this particular punch was not well conceived. He is correct to note that Rubio was elected to do this job and he could resign from the Senate if he doesn’t want to be there. But, Bush should have pressed the point: “Marco, you are asking the American people to elect you President as you asked the people of Florida to elect you senator. What if you decide you don’t like the White House either. Will you just not do that job too?” Rubio should be very weak on this issue. His initial response was weak, comparing his voting record to that of others, a method of deflection that always shows weakness. But, Bush could not nail him on it.

Bush also missed an opportunity when asked a silly question about gambling and fantasy football. He made the mistake of answering the question. This opened the door for Christie to have the best moment of the entire debate: “Wait a second. We have $19 trillion in debt, we have people out of work, we have ISIS and al-Qaeda attacking us, and we’re talking about fantasy football?” If Bush had started his response that way, he would have won the debate. He didn’t. Big establishment donors watching the debate had to wonder if their next check would be going to Christie rather than Bush.

Rubio’s best moment came in response to a question about his personal finances. It was a bad question to be sure. He started by attacking the media for parroting Democratic attack lines, then shifted to a tale of his family’s personal story, the fact that he did not inherit gobs of money, and that in his campaign he would focus not on his own finances but on those of the American people. It was empathetic. It was personal. It was his finest moment in the debate. And, he had some other good moments, such as taking a question on tax policy and talking about the family that runs a dry cleaning operation in his neighborhood, and the fact that they pay more in taxes than the corporate dry cleaners down the street. The mom and pop shop is an S-corporation, he said, which is the kind of wonkiness Rubio benefits from displaying, but the wonkiness was softened by placing it inside a story about people in his own neighborhood.

The biggest winner, however, was Sen. Ted Cruz. He interjected himself powerfully into the evening repeatedly, chastising the media, denouncing Hillary Clinton more effectively than the others, pulling a lot of policy ideas from Sen. Rand Paul’s playbook, striking a surprisingly populist economic note at times, and most importantly, positioning himself as the outsider in the race who is also a fighter. As Carson’s numbers fall, and they will, and if Trump’s numbers fall -- and no one should make predications about Trump -- Cruz stands to benefit the most from the anti-establishment anger that is driving the Carson and Trump numbers in the first place. And, unlike them, Cruz is not going to get caught on a policy question, that is, he is not going to get caught looking uninformed or stupid. Crazy and extreme, yes, and crazy and extreme seem to be what the GOP base wants these days, but Cruz is smooth and has gobs of money. As the debate wore on, and mindful that there are plenty of banana peels for the candidates to navigate, I had the feeling that he was the man most likely to be able to garner this nomination.

Ms. Fiorina did not have the kind of breakout performance she had in the last two debates, and she needed it. Apart from debates, her campaign is lackluster. Sen. Paul and Gov. Huckabee were after-thoughts from start to finish. Gov. Kasich gets high marks for calling for sanity, but in this race, at this time, calling for sanity is like cheering for the Red Sox at Yankee Stadium: People won’t hear you and, if they do, they might throw something at you.

One thing struck me that has not gotten much notice in the mainstream media. The GOP candidates all bash government, big government and the federal government especially. But, they spend very little time talking about civil society, about the role of family, communities, churches, local governments, etc. There is an opening for the Democrats here, but I wonder if they will take it. Not many Democrats these days like to talk about the importance of churches in American life, but it would be useful in the general election to have established that Democrats do not look to the federal government to accomplish everything.

So, the winners were, in order: Cruz, Rubio, Trump and Christie. The losers, again in order, were: Carson, Bush, Fiorina. The others need to ask themselves how long they want to stay in the race.