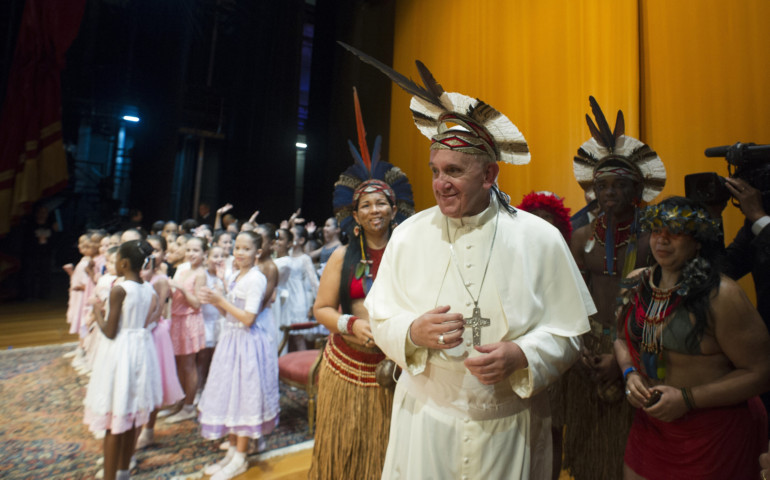 Pope Francis wears an Indian headdress presented to him by members of the Pataxo tribe of Brazil July 27 in Rio de Janeiro. The pope greeted the tribal members as he met with political, economic and cultural leaders at Rio's Municipal Theater. (CNS photo /L'Osservatore Romano)

Pope Francis has a vision of hope and beauty for the Amazon Basin: Transform it into a garden.

The South American-born pontiff defended the environment and the Amazon Basin -- a region stretching 2.5 million acres (or 40 percent of the continent) across eight countries, responsible for 20 percent of the world's oxygen, and home to the Amazon rainforest and its millions of plant and wildlife species -- in two separate occasions last week during Brazil's World Youth Day festivities.

On Saturday, Francis told the country's bishops that the defense and protection of the Amazon is "relevant for the present and future journey not only of the Brazilian church but of the whole society. ... The church's presence in the Amazon Basin is not that of someone with bags packed and ready to leave after having exploited everything possible."

He proceeded to invite the prelates to reflect upon the Aparecida document that emerged from a 2007 meeting of Latin American and Caribbean bishops. With Francis himself as a primary author, the document, among other issues, spoke to the perils facing Amazonia and its indigenous people from illegal logging, widespread cattle grazing by ranchers, and irresponsible development projects.

In his address Saturday, Francis told the bishops the document represented a "forceful appeal for respect and protection of the entire creation which God has entrusted to man, not so that it be indiscriminately exploited, but rather made into a garden."

Describing the Amazon rainforest as a "litmus test for church and society in Brazil," the pope called for more lay and priestly missionaries in the area and an increase in the training of native clergy, who are needed to bring the vision of the "church's Amazonian face" into sharper focus.

The defense of the Amazon and the environment came up again Saturday when the pope met with members of indigenous tribes at Rio de Janeiro's Municipal Theater following a speech to Brazil's political and business leaders.

The Associated Press reported that the Amazonian Indians expressed hope Francis would help them protect land designated by the government as indigenous reserves.

"We hope that he will help intervene with the government and stop all the big public works projects that are happening in the region," Levi Xerente, a 22-year-old member of the Xerente tribe of the Tocantins state in the Amazon, told AP.

Threats to the Indians are numerous:

As I followed the coverage of Francis' Brazil trip and his outspoken defense of the earth, an overpoweringly palpable presence from the other side of the cosmological veil filled the room: It was Sr. Dorothy Stang, smiling, absolutely beaming from Francis' championing of her rainforest home. And her eyes were twinkling, as well.

"The angel of the Amazon," Stang worked in the rainforest with members of her religious community -- the Ohio province of the Notre Dame de Namur sisters -- for more than 40 years, primarily in the Brazilian cities of Coroata and Anapu.

A Dayton, Ohio, native, she organized women's health clinics and taught the indigenous people sustainable farming practices. She connected them with lawyers who could defend their property rights against the illegal loggers and rich ranchers who grabbed the poor farmers' land by force and intimidation.

In a phone interview this week from Palmer Lake, Colo., Stang's brother, David, said his sister was a constant supportive presence of the region's farmers in countless ways. Besides her political and environmental activism, she organized religious services and spiritual formation classes for adults and children alike. She introduced them to the church's social justice doctrines.

Along the way, however, she made enemies among the ranchers and loggers. On the morning of Feb. 12, 2005, Stang was murdered, shot down by hired killers as she traveled to a meeting with a group of parishioners.

Both David and the Notre Dame de Namur sisters expressed their gratitude for Francis' defense of the earth and the people that Dorothy loved so very much.

"The Amazon is the largest rain forest in the world and governs the climate for the world as well as being the home for many species of plants and animals," she said.

Krimm, 83, who went to high school with Dorothy in Dayton, said she prays that the church will respond to his appeal "by sending priests, brothers, sisters and laity to live, work and support the poor people in the Amazon Basin. ... We are all called to care for this beautiful Earth that God has given us and for our brothers and sisters who struggle just to live."

Notre Dame de Namur Sr. Margaret Hoffman, justice and peace coordinator for the California province, said she, too, was gratified by Francis' words, calling them "inspirational and practical."

Stang was a 1964 graduate of Notre Dame de Namur University in Belmont, Calif. In 2007, the school created a social and environmental justice center named in her honor.

Recalling that Stang was shot by hired gunmen as she recited the Beatitudes from Matthew 5, Hoffman said Stang once wrote, "We need to be poor with the poor and reappropriate a kind and tender relationship with Mother Earth. Then we will know how to act."

"No wonder that she was called 'Angel of the Amazon,' or that the people declared that they would not bury her; they would plant her," Hoffman wrote in an email.

Another development at the World Youth Day might have prompted Dorothy's smile. During the past year's preparations, the World Wildlife Fund worked in conjunction with the Buenos Aires archdiocese.

Dekila Chungyalpa*, director of the fund's Sacred Earth program, told Eco Catholic that her group asked how they could help with the planning.

"They (the archdiocese) invited us to develop a series of environmental videos, to be shown during the week," she said.

The result was five short presentations, one highlighting the Amazon Basin shown both before and after Francis' Sunday liturgy.

Chungyalpa also participated on a July 24 panel exploring the connection between faith and the environment along with colleagues WWF-Brazil director Cica Brito and Amazon conservation expert Claudio Maretti.

You can view the "Amazon" video and the others (including interviews with World Youth Day attendees) on the World Wildlife Fund's YouTube page.

*An earlier version of this story misspelled Chungyalpa's name.