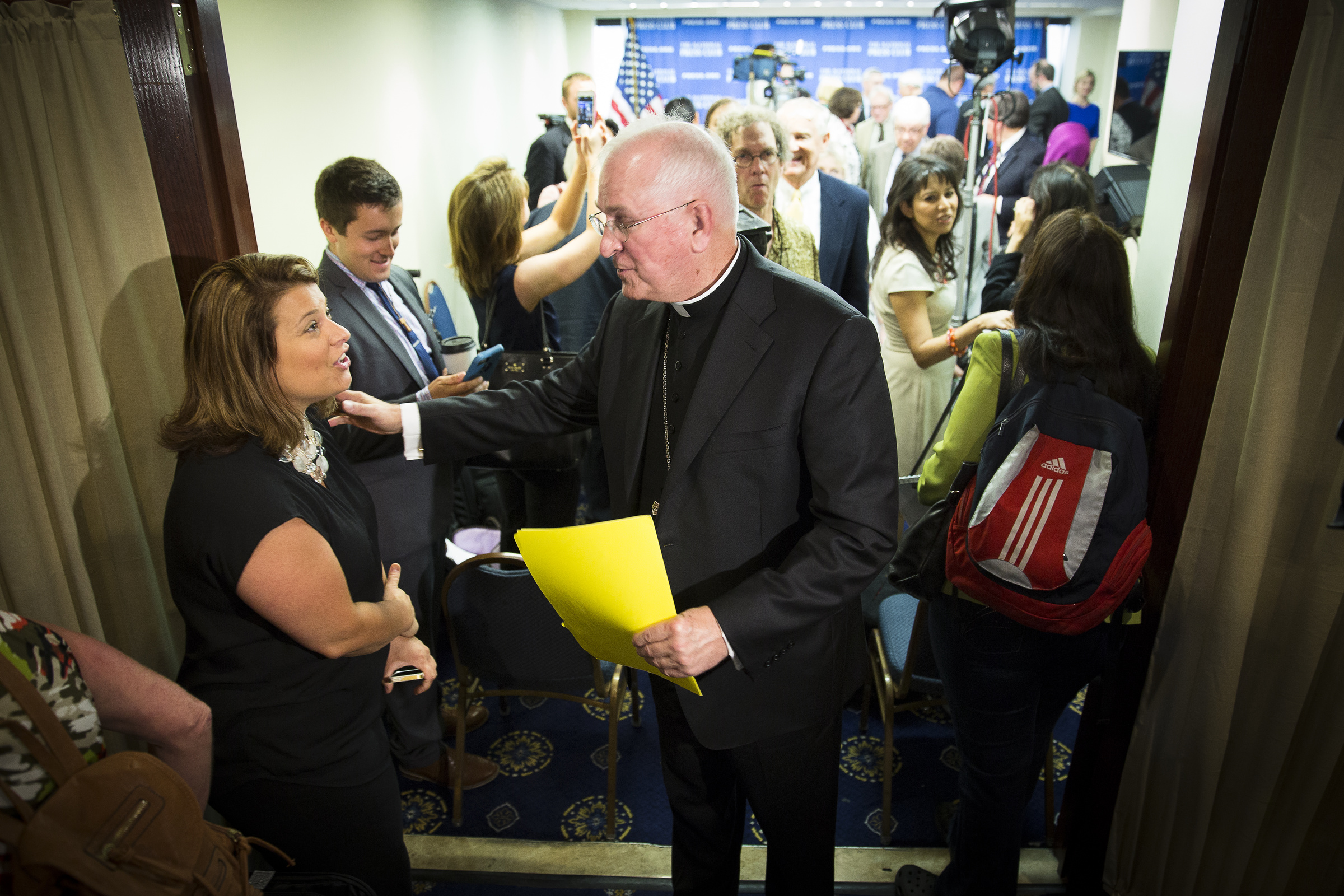 Wuerl described the document as “an urgent challenge to protect our common home” yet one that issues from “a long standing church tradition.”

Kurtz said the document calls the Catholic community to three tasks. The first is to advocate on a global, national and local level “for the common good, especially for those most vulnerable and without a voice.”

The second is to “take seriously our role in formation of young people and of adults.”

“This formation in integral ecology means that we need to consistently talk about care for the voiceless and vulnerable, from the moment of conception to natural death, to the poorest of people to care of the earth. In a sense, to cultivate what we would call religious virtues that show themselves in civic responsibility.

“And finally, the use of our resources in the way, quite frankly, we build buildings, build churches.” He said the Catholic community is called to “seek ways to do things in ways that honor the earth.”

The prelates were asked how they would respond to critics who contend, as has occurred in other matters of church teaching not having to do with sexual ethics, that steps outlined in the encyclical are merely matters for “prudential judgment” and not mandatory.

“The Holy Father is saying, ‘Look at the facts and let us address these facts in light of the moral principles that should be guiding us,” said Wuerl. “I don’t think that because there’s a tentative element to the analysis of the scientific fact that it’s any less imperative.”

If someone reaches toward a hot grill, he said as an example, “and you say, ‘Don’t touch that or you’ll get burned,” the person could reply, ‘Is that a definitive faith judgment or a prudential judgment?’ I’m not going to answer that, but touch the grill, and you’ll get burned. And I think the Holy Father is saying, ‘We need, with whatever scientific information is available to us, to make a moral judgment now.”

Pope Francis in Laudato Si’ continues the critique of Popes John Paul II and Benedict XVI of the growing gap between the “rich north” and the “poor south,” speaking in global terms. The two prelates were asked if that critique applied in a special way to North America and also what they might say to Catholics involved in companies that create the consumer culture that Francis criticizes and that also caused environmental devastation in other countries that would not be permitted in the United States.

While he continues the critique, said Kurtz, Francis “speaks with a unique voice from South America.” He is “very careful to say … every one of us has responsibility. So he won’t fall into the either trap – the trap of saying well, this is simply a matter for these particular owners of corporations, nor will be say they are absolved from it.” He described the encyclical’s content as providing marching orders that bring “a new urgency” to efforts already under way.

Wuerl, in response, emphasized that the pope “is asking for a critique from the inside. He is asking for a critique by all of those who are the agents of economic development.” It is not presented, he said, as “this is how you should do what you need to do,” but rather, “here are the principles you should be reflecting on as you determine how you are going to go about moving in to the future.”

Wuerl gave a similar answer when asked to reflect on comments made by Jeb Bush during a campaign stop in Bush’s bid for the Republican nomination for president. Bush said he didn’t take advice from priests or cardinals or the pope on matters of economics or politics.

The encyclical, said Wuerl, gives no such directives but rather extends “an invitation to take a look at the principles involved,” such as “the dignity of the person, the importance of the environment and the right order of social development and economic development.”