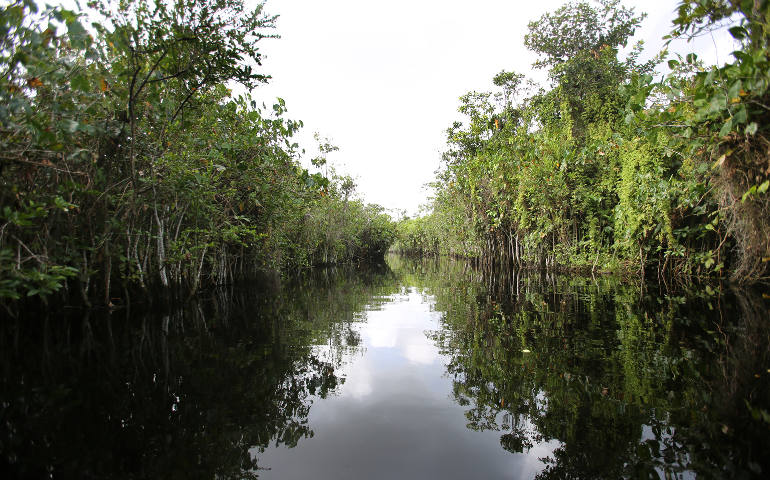 Trees line the banks of a creek along the Pomeroon River in the interior of Guyana in this March 18 photo. The Catholic Church supports the efforts of scientists to study the causes and effects of climate change and insists governments and says businesse s must get serious about specific commitments for protecting the environment. (CNS photo/Bob Roller)

The Catholic church supports the efforts of scientists to study the causes and effects of climate change and insists governments and businesses must get serious about specific commitments for protecting the environment.

But Pope Francis, like his predecessors, does not pretend to have a technical solution to the problem. However, he does feel a responsibility to remind Christians of their religious obligation to safeguard creation, beginning with human beings who are created in the image and likeness of God.

Clearing his calendar for a week in late March, Francis rolled up his sleeves to put the final touches on an encyclical letter about the environment; building on what he and his predecessors have said, the document -- planned for publication early in the summer -- is expected to present ecology as the ultimate pro-life, pro-poor, pro-family issue.

For Francis, like retired Pope Benedict XVI, safeguarding creation is not simply about protecting plants and animals, or just about ensuring the air, water and land will support human life for generations to come. Those things are part of the task.

"We need to see -- with the eyes of faith -- the beauty of God's saving plan, the link between the natural environment and the dignity of the human person," Francis wrote in a speech prepared for young people in the Philippines in January.

Christianity teaches that God created the world and everything in it with a certain order and proclaimed it good. As stewards of God's creation, Francis has said, people have an absolute obligation to respect the natural order.

Defending marriage as the lifelong union of a man and a woman, Francis told a conference in November, "the crisis of the family has produced a human ecological crisis, for social environments, like natural environments, need protection."

Related: "Pope: Conservation not going 'green,' but being Christian"

"Human ecology" was a phrase often used by his predecessor Benedict, who was known for "green" initiatives, including installing solar panels at the Vatican. He taught that "the book of nature is one and indivisible; it includes not only the environment but also individual, family and social ethics. Our duties toward the environment flow from our duties toward the person, considered both individually and in relation to others."

In his 2009 encyclical, "Caritas in Veritate," Benedict wrote that the church "must defend not only earth, water and air as gifts of creation that belong to everyone. She must above all protect mankind from self-destruction. There is need for what might be called a human ecology, correctly understood."

The "decisive issue," he wrote, "is the overall moral tenor of society. If there is a lack of respect for the right to life and to a natural death, if human conception, gestation and birth are made artificial, if human embryos are sacrificed to research, the conscience of society ends up losing the concept of human ecology and, along with it, that of environmental ecology."

Echoes of Benedict's thought can be found in Francis' frequent denunciations of the "throwaway culture." He sees people increasingly at ease throwing away not just plastic and paper, but wasting food at a time when so many people are starving. Even more seriously, he has said, people have a similar "throwaway" attitude when it comes to people they don't find useful -- including the unborn, the sick and the elderly.

The international community, he said, must address "the structural causes of poverty and hunger, attain more substantial results in protecting the environment, ensure dignified and productive labor for all and provide appropriate protection for the family, which is an essential element in sustainable human and social development."

As often happens when things go wrong, Francis has said, the poor pay the highest price for the destruction of the environment: the seas and rivers no longer provide fish; landslides send their makeshift homes tumbling down hillsides; the deserts expand, robbing sustenance farmers of even a meager diet.

Flying from Sri Lanka to the Philippines in January, Francis told reporters accompanying him that Cardinal Peter Turkson, president of the Pontifical Council for Justice and Peace, and a team from his office had prepared drafts of the ecology document.

During an early March visit to Ireland, Turkson spoke about the principles underlying the pope's upcoming letter, insisting "this is not some narrow agenda for the greening of the church or the world. It is a vision of care and protection that embraces the human person and the human environment in all possible dimensions."

All people are called to be "protectors" of the environment and of one another, especially the poor, the cardinal said. The responsibility and obligation of care is both a matter of justice and a matter of faith; it is the natural result of being in a right relationship with God, with others and with the earth.

"When Pope Francis says that destroying the environment is a grave sin; when he says that it is not large families that cause poverty but an economic culture that puts money and profit ahead of people; when he says that we cannot save the environment without also addressing the profound injustices in the distribution of the goods of the earth; when he says that this is 'an economy that kills' -- he is not making some political comment about the relative merits of capitalism and communism," Turkson said. "He is rather restating ancient biblical teaching."

At the heart of the "integral ecology" Francis is calling for, he said, "is the call to dialogue and a new solidarity, a changing of human hearts in which the good of the human person, and not the pursuit of profit, is the key value that directs our search for the global, the universal common good."