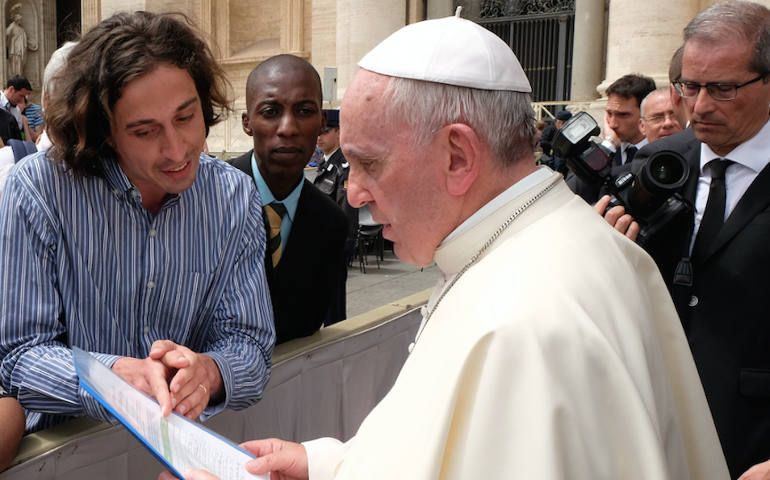 A petition calling for world leaders to address climate change and “drastically cut carbon emissions” received a big endorsement last week in Rome from the pope.

Members of the Global Catholic Climate Movement met with Pope Francis May 6 while in Rome for planning meetings around the upcoming papal encyclical on the environment. During his weekly audience in St. Peter’s Square, they introduced their petition and asked for his blessing.

“He was very supportive,” Tomás Insua, a Buenos Aires, Argentina, native and co-founder of the group, said in an email. “He even joked that we were competing against his encyclical before it was published.”

The petition, released in late March and addressed to world leaders, reads:

“Climate change affects everyone, but especially the poor and most vulnerable people. Impelled by our Catholic faith, we call on you to drastically cut carbon emissions to keep the global temperature rise below the dangerous threshold of 1.5°C, and to aid the world’s poorest in coping with climate change impacts.”

On May 7, Msgr. Guillermo Karcher, a papal master of ceremonies, signed the petition on behalf of the pope, as protocol prevents popes from signing such documents themselves. Karcher also presented the six representatives of the Global Catholic Climate Movement with the book The Energy of the Sun in the Vatican, a gift from the pope to illustrate the Vatican’s commitment to renewable energy as a solution to climate change.

“The Pope's endorsement is a huge thing for us, because we are just starting to promote our climate petition in the Catholic community and his support legitimizes our movement,” Insua said.

The Global Catholic Climate Movement formed in January ahead of the pope’s trip to the Philippines. It has grown to a network of more than 100 Catholic organizations worldwide. Among its partners are the Manila archdiocese’s Ecology Ministry in the Philippines, Acción Católica Argentina, and Catholic Youth Network for Environmental Sustainability in Africa (CYNESA). U.S. participants include Catholic Climate Covenant, Catholic Charities USA, Catholic Rural Life, and the Leadership Conference of Women Religious.

The network is seeking 1 million signatures to present to world leaders in December at the Paris climate negotiations, where they are expected to finalize and sign a potential agreement for international action to address climate change.

“Climate change hits the poorest first and hardest, and will leave an unnecessarily dire legacy for future generations,” Allen Ottaro, director of the Kenya-based CYNESA, said in a statement. “We Catholics need to step up against climate change and raise a strong voice asking political leaders to take action urgently.”

The Rome meetings, held May 6-8, brought together 45 Catholic leaders heavily engaged in environmental issues to brainstorm strategic and collaborative actions to promote the encyclical.

In addition to members of the Global Catholic Climate Movement, participants included several Brazilian bishops, along with representatives of Caritas; CAFOD, the official aid agency of the Catholic church in England and Wales; CIDSE, an alliance of Catholic development agencies; the Sisters of Mercy; and the Columbans.

“We want to make sure that the encyclical and this whole issue is not perceived as climate change is the issue -- that climate change is a symptom of a greater issue,” said Patrick Carolan, executive director of Franciscan Action Network, who attended the meetings. “And the greater issue is our lack of connectedness, our viewing ourselves as separate from creation instead of part of creation.”

As far as actions, the meetings largely targeted three events: the release of the pope’s encyclical, currently undergoing translation and expected in June or July; Francis’ U.S. visit in late September, when he will address Congress and the United Nations; and the Paris climate talks in December.

On June 28, the Catholic environmental leaders are asking churches around the world to ring their bells as a way of saying thank you to the pope for the encyclical. In addition, they have planned a rally in Rome that day and for smaller prayer vigils concurrently held around the world.

Other plans include a meatless Friday campaign and climate pilgrimages to Rome and Paris, as well as smaller, local versions. A prayer vigil in Washington will take place Sept. 23, the night before Francis addresses a joint session of Congress, with supportive vigils held elsewhere around the globe.

The Global Catholic Climate Movement hopes events like these help raise awareness not only of the pope’s encyclical, but of a host of ecological issues.

“In Argentina it is starting to generate excitement, although I would say that most Catholics are still unaware that the eco-encyclical is coming,” Insua said.

In the U.S., much discussion has preceded the encyclical, and it has generated interest outside Catholic circles. Carolan said he planned to meet with representatives of the World Wildlife Fund at some point to talk about the papal teaching document, and that other environmental groups have contacted him about possible collaboration.

“They’ve reached out to us and said that they think that Pope Francis’ encyclical is one of those defining moments in history, this encyclical, and they understand it’s important, even as a secular organization,” he said.

Carolan sees the interest from nonfaith groups as a good thing: a potential avenue to expand the public’s view of climate change from simply a science or environmental issue to an issue concerning faith and morality.

“If they can use the pope’s message to really get the message out to their members, some of whom are Catholic but many of whom are not or not even people of faith … that this is a moral and ethical and spiritual issue, it might be bringing us all closer together,” Carolan said.