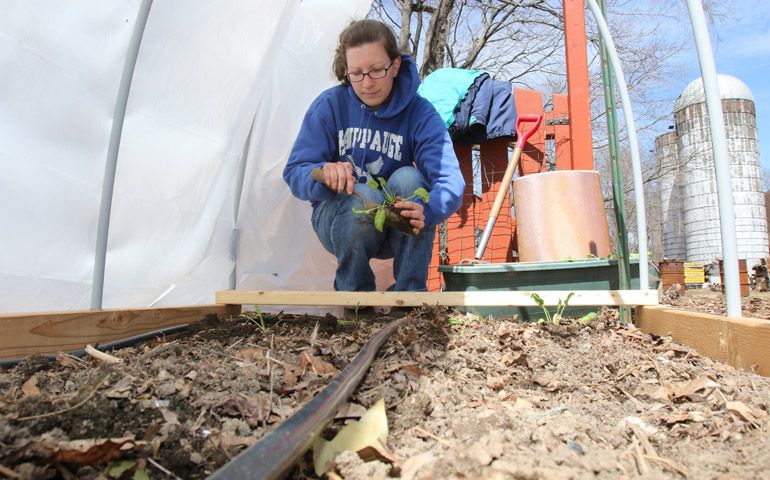 St. Joseph Sr. Heather Ganz plants spinach April 1 in an organic garden on the grounds of her religious community's motherhouse in Brentwood, N.Y. (CNS/Gregory A. Shemitz)
This article appears in the Francis: The Environment Encyclical feature series. View the full series.

Pope Francis' environmental encyclical signals a call for the world community to reflect and discuss how lifestyle choices impact nature and neighbor, but above all represents a call to action, U.S. bishops said.

In Chicago, Archbishop Blase Cupich called the publication of "Laudato Si', on Care for Our Common Home" "a watershed moment for the Church, for humanity, and for the planet."

"Pope Francis has put a human face on the issue of ecology and caring for creation," Seattle Archbishop J. Peter Sartain said.

"This is really a document that's going to be with us for a long time," said Bishop Oscar Cantu of Las Cruces, N.M.

Cantu, chair of the Committee on International Justice and Peace of the U.S. Conference of Catholic Bishops, spoke to NCR from Mexico, where he was on a solidarity visit. He said the encyclical's ecological discussions cross into conversations there about the root causes of migration.

"It's quite integral into what we've been talking about all week with regard to violence, with regard to the sustainability of economies, with jobs," he said. Upon the encyclical's release, Cantu and two border bishops, José Guadalupe Torres Campos of Ciudad Juárez, Mexico, and Mark Seitz of El Paso, Texas, issued a letter thanking Francis for the document.

"Your teaching in Laudato Si challenges us to work for a border transformed by the power of faith and with bold works of charity and justice, a place of natural beauty that stands as a compelling sign of God's Kingdom," they and the Hope Border Institute said in the joint letter.

While much attention was given to Francis' comment that he hoped the encyclical would influence world climate negotiators gathering in Paris in December, Cantu said he saw the document as challenging all people, not just governments or corporations, to reflect on how they live. Specifically, an examination of a central focus of Francis' papacy: the throwaway culture, where lifestyles race in pursuit of the faster and better.

"It's not a terribly humane way to live because those who are left behind are those who have the least possibility of defending themselves against an environment that is no longer friendly to sustainability, to areas where clean water is not to be found, or where the land is not able to sustain crops that will feed the population," he said.

More than anything, Cantu said he saw Laudato Si' as Francis' attempt to shift the ecology frame from a scientific or political one to a question of morality.

The church is not interested in settling scientific questions or replacing politics, said Miami Archbishop Thomas Wenski. "But she does, however, wish to contribute to the conversation and offer a road map based on a correct anthropology or understanding of human dignity that includes the poor and excludes no one."

Wenski chairs the bishops' Committee on Domestic Justice and Human Development. At the bishops' meeting in June, he and Cantu briefed their fellow bishops on expected encyclical themes and held workshops on the text.

He told NCR Thursday the document builds on past church teaching and shows the church as "a friend of science and a friend of humanity."

Less friendly to science has been his state of Florida -- viewed as one of the most vulnerable areas to climate impact, particularly sea level rise -- where government officials were ordered not to use the terms "climate change" or "global warming" and two presidential candidates, former Gov. Jeb Bush and U.S. Sen. Marco Rubio, have both expressed skepticism of reports linking climate change to human activity.

Bush told reporters, "I don't get economic policy from my bishops or my cardinals or my pope," but a day later backed away from those comments, saying he tries to follow the church's teaching.

Asked how he would engage the encyclical with either presidential hopeful, Wenski told NCR that the pope and the church insist the climate issue, like any touching on dignity and the human person, "is a moral issue and that proposed solutions must be more than merely economic or technical solutions."

"I would hope that both Bush and Rubio would welcome the encyclical and its guidance as they seek to be placed in positions where they will help shape policies dealing with both the natural and human ecology," the archbishop said.

Across the country, other bishops weighed in through statements and media events. Dioceses holding press conferences included Stockton, Calif.; Corpus Christi, Texas; and Chicago. The Minnesota Catholic Conference held an event in St. Paul that included its director and Bishop Donald Kettler of St. Cloud, Minn.

At the National Press Club in Washington, Archbishop Joseph Kurtz of Louisville, Ky., and Washington Cardinal Donald Wuerl addressed media in an event co-sponsored by the U.S. bishops' conference and the Catholic Climate Covenant.

Kurtz, president of the bishops' conference, outlined three tasks the encyclical called Catholics to address: advocate at all levels for the common good; take seriously their role in forming young people and adults; and in using resources, seek "to do things in ways that honor the earth."

Wuerl described Laudato Si' as "an urgent challenge to protect our common home." In a conversation with NCR prior to the encyclical's release, he said it may take months or even years to unpack the pope's full message, similar to how church teaching has previously impacted culture.

The Washington cardinal said answering the question of how to respect and utilize creation in a way to ensure it remains for future generations is a critical part of the discussion.

"It's a time for the church to be bold, to speak about major issues, and to achieve a new level of relevance in people's lives," Cupich said at a Chicago press conference. "We may not know all the science has to learn about climate change, but we do know enough to realize that it's time to act."

Cupich said the archdiocese is working to retrofit older buildings and curb water use. He also suggested that families foster interest and concern for the environment in younger children and encourage older children to play an active role to help curb human impact on the environment.

"Our faith dictates that we have to care about and for humankind, and we can't do that without caring for the earth, our common home. In short, we see the assault on the environment as a fundamental matter of right and wrong," the Chicago archbishop said.

In California, Stockton Bishop Stephen Blaire, a former domestic justice chair, related Laudato Si' to the realities of his drought-devastated diocese, which includes portions of the Sierra Nevada Mountains, whose snowpack is a vital water source in the state, and the agriculturally crucial San Joaquin Valley.

"Each of these regions is facing unprecedented ecological challenges with drought, risk of wildfire, and dangerously poor air quality. We know that it is especially the poorest and most vulnerable of residents who are suffering from these realities," Blaire said.

Through its Environmental Justice Project, which began in 2006, the Stockton diocese has worked on issues related to climate change, air quality, land use, solar energy and water conservation, with particular focus on how each impacts the poor.

Blaire continued: "Pope Francis' pastoral message on an integral and sustainable development which cares for our environment and the human family is a moral issue that rings true for us. Caring for God's creation will help people in need right now, and it will leave a better world for our children and grandchildren."

To the west in San Francisco, Archbishop Salvatore Cordileone noted how issues of economic gaps between rich and poor and "the underlying spiritual hunger felt by so many today" are all interconnected.

"Solutions must be found by involving men and women of many perspectives and disciplines," he said.

Philadelphia Archbishop Charles Chaput in his weekly column noted the encyclical "includes an unusual level of scientific analysis and policy recommendations," with climate change and economic development playing key roles in the content.

"This will invite discussion," he wrote.

Chaput likened the purpose of Laudato Si' to the post-World War I works of literature from two Christian authors, J.R.R. Tolkien and C.S. Lewis. He specifically highlighted a passage from The Lord of the Rings:

"[It] is not our part to master all the tides of the world, but to do what is in us for the succor of those years wherein we are set, uprooting the evil in the fields that we know, so that those that live after may have clean earth to till. What weather they shall have is not ours to rule."

"Times have changed since Tolkien wrote those words, but the wounds of humanity and the world it stewards have only grown more urgent. In reading and judging Laudato Si, we might keep that fact in mind," he wrote.