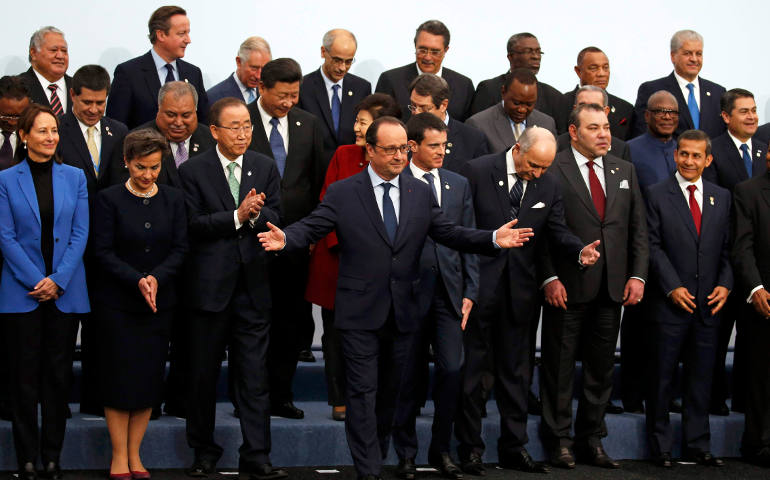 French President Francois Hollande gestures as he poses for a photo with fellow world leaders during the opening day of the U.N. climate change conference, known as the COP21 summit, in Le Bourget, France, Nov. 30. (CNS photo/Jacky Naegelen, Reuters)

On the opening day of the United Nations climate change conference in Paris, the Vatican secretary of state told attendees they have the pope’s encouragement for a fruitful outcome, but that the high-stakes gathering does not represent the end or start of action, but the path forward.

“COP21 is not a moment of arrival or a starting point, but rather a crucial path in a process that without doubt will not end in 2015,” Cardinal Pietro Parolin said Monday, referring to the abbreviation of the summit, formally known as the 21st Conference of the Parties.

“An agreement with a long term perspective of this type should provide for processes for the revision of commitments and transparent, effective and dynamic follow-ups, able to progressively increase the level of ambition, as well as to guarantee suitable control,” he said.

The cardinal repeated common Vatican principles for a climate deal, that it be founded on the principles of solidarity, justice, equality and participation, and that it seek three interrelated objectives: mitigating climate change, eradicating poverty, and promoting human dignity.

Parolin added that serious consideration must be given to education and training -- in the implementation of sustainable models of production and consumption, along with new attitudes and lifestyles -- as the areas are "often situated at the margins of negotiations for international agreements."

"Technical solutions are necessary, but they are not enough if they do not consider education in sustainable lifestyles and responsible awareness," Parolin said.

The Paris climate summit (Nov. 30-Dec. 11) seeks to produce an agreement among all countries aimed at collectively holding average global temperature rise below 2 degrees Celsius (3.6 degrees Fahrenheit) compared to pre-industrial times. While many recognize the deal that emerges likely will fall short of that goal -- U.N. and independent reviews of nation pledges made prior to COP21 found they would limit warming around 2.7 to 3.7 degrees Celsius -- a common refrain hopes it will offer a starting point and include mechanisms to ratchet up commitments over time.

The first day of COP21 witnessed the largest gathering of world leaders assembled outside of U.N. headquarters in New York, each issuing their own comments and directives to negotiators. In his statement, U.S. President Barack Obama began by offering condolences to the victims of the Nov. 13 Paris terrorist attacks, describing the climate summit as "an act of defiance that proves nothing will deter us from building the future we want for our children.

"What greater rejection of those who would tear down our world than marshaling our best efforts to save it?" he said.

While cynics question what can be done to combat climate change, the president noted recent points of progress:

"So our task here in Paris is to turn these achievements into an enduring framework for human progress -- not a stopgap solution, but a long-term strategy that gives the world confidence in a low-carbon future," Obama said.

Monday also saw the unveiling of two major initiatives aimed at growing and accelerating clean energy innovation in both public and private sectors. Twenty countries, including the U.S., China and India, committed to doubling their collective budgets in clean energy research and development to $20 billion by 2020. In addition, a group of private investors, led by Bill Gates and including Facebook founder Mark Zuckerberg, pledged to provide financial support for emerging clean energy companies.

The effort appeared to align with a second pillar Parolin outlined as part of the "global and transformational" agreement -- language Francis used in his address to U.N. offices in Nairobi, Kenya -- that the Vatican sought from COP21. He said the deal should not only identify methods for implementation but "above all transmit clear signs" that will guide governmental action, along with the private sector, scientific community and civil society, toward a low-carbon economy and full human development.

"In this regard, the countries with greater resources and capacities should set a good example, contributing resources to those countries in greater need so as to promote sustainable development policies and programs," he said, listing programs promoting renewable energy, energy efficiency, food safety and ending food waste, forest management, and "the development and transfer of suitable technologies."

Before leaving Paris on Tuesday, Obama met with leaders of five small island nations, identifying himself as "an island boy." The Washington Post reported that the president held fast to U.S. opposition to "loss and damage" payments or ramping up the goal in Paris to 1.5 degrees Celsius. At the same time, he said a Paris agreement should support the most vulnerable like those living on islands threatened by sea level rise, and his administration announced plans for $52 million in aid to the world’s poorest countries to address climate impacts.

The "adoption of a clear ethical orientation" was the first of the three pillars Parolin described in his address to COP21 participants.

"We are well aware that the people most vulnerable to the impact of the phenomenon of climate change are the poorest and future generations, who suffer the gravest consequences, often without bearing any responsibility," he said.

Parolin added that the phenomenon of climate change has no political or social boundaries that isolates itself, a revelation that should fortify the idea of one human family. There is no room for a globalization of indifference, he said.

The cardinal said that given the urgency of the situation, a Paris deal must "be focused on the recognition both of the ethical imperative to act in a context of global solidarity, and of the common but differentiated responsibilities of all actors in accordance with their respective capacities and conditions."

The conference’s second day also saw numerous faith groups participate in the Fast for the Climate, a ritual they have carried out throughout the year on the first day of each month.

The Tuesday fast, supported by the interfaith coalition OurVoices, Franciscan Action Network and the World Council of Churches, was pegged as a "fast and feast," taking a Ramadan-style approach where participants fasted during the day before sharing a meal in the evening. Organizers estimated as many as 10,000 people worldwide taking part in the day’s fast.

Following Typhoon Haiyan striking the Philippines in November 2013, Yeb Sano, a climate negotiator for the island country, declared at COP19 in Warsaw, Poland, he would not eat until greater progress was made in the climate negotiations. At an event in Paris for the fast, Sano, a Catholic, described the fast "as a form of prayer. A prayer for a miracle here in Paris."

"We are urging world leaders gathered in Paris to heed the clamor for change, and to recognize that we are hungry, hungry for change," Sano said in a message on Green TV.