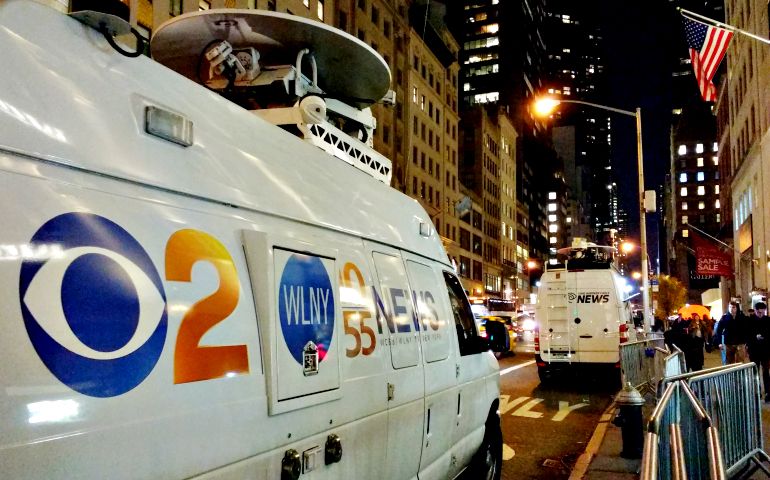 The American media has a love/hate relationship with Donald Trump, the new president.

Reporters love Trump because he is the most interesting news story of the day, and every reporter wants to cover the biggest news story. They scramble over each other like celebrity fans jockeying for a better view of their idol. They obsess over his every tweet like tweens obsessing over every new song from their favorite singer. They just can't stop talking about him. He has the fascination of a five-alarm fire or tornado sweeping through a neighborhood. "More at 11."

The media also loves Trump because he makes them money.

Reporters covering Trump know that he is good for their personal careers. They have job security in an industry where their colleagues have been decimated by personnel cuts in newsrooms. Reporters and talking heads who are "experts" on Trump are in great demand.

Media executives know that stories about Trump, both positive and negative, attract readers and viewers. That means more money in ad revenues.

"This is the best year in the history of cable news," the president of CNN told The Hollywood Reporter back in November.

Primetime ratings for CNN, FOX News, and MSNBC during the election were up over 50 percent from the previous year. Liberals tune in to curse Trump; conservatives tune in to cheer him. Network executives don't care as long as viewers tune in.

Business reporters in Fortune are already speculating on how cable TV will survive a post-election slump.

The obvious way to avoid a slump is to continue to obsess over Trump. We saw that during the presidential transition, and we will continue to see it now that Trump is president.

Because Trump was so good for ratings, we saw him get special treatment from the media. For example, prior to Trump, no one would be permitted to phone in to the Sunday talk shows. They had to be in the studio on camera. Trump got to call in because the shows saw a jump in viewership whenever he did. They could not afford not to have him on their shows.

Many in the media disagree with his policy positions and don't like him as a person, but news reporters are used to covering people they disagree with and don't like. American print reporters and their editors have been fairly scrupulous in separating news from opinions, unlike reporters in other parts of the world who work for papers that are operated for the benefit of a single political party.

True, the cable networks can show bias by throwing red meat to their viewers, but Megyn Kelly of FOX News still asked tough questions of Donald Trump, while CNN and MSNBC did the same to Hillary Clinton. Professionalism keeps personal bias at bay.

The media also hates Trump because he has shown them to be a powerless giant. They are supposed to be respected as an institution that makes a difference. Under Trump, "mainstream media" has become a term of contempt. They are the butt of a joke.

How many times has the media exposed Trump's statements as untrue, but it has made no difference? His fans don't care how many Pinocchios he gets from The Washington Post. Trump accuses his media critics of partisanship and creating fake news, and his supporters believe him.

Ever since Watergate, the media has seen itself as the knight in shining armor who will protect the maidenly public from the political dragons of corruption and deceit. Switching metaphors, the media thought it could kill the political vampires with the bright sunlight of truth. This time the vampire grew stronger in their sunlight, and the villagers came running after the reporters with pitchforks and torches.

This is not how the story is supposed to end. This is very discouraging for the media.

Trump also presents reporters with a professional dilemma. How many different ways can you say his statement is incorrect, his alleged facts are wrong, his numbers don't add up, his accusation has no substance, he has no proof, there is no evidence, he contradicts himself, his promise is being broken?

Is he stupid, lying, or both?

How many times must Trump not tell the truth before the media acknowledges that we have a serial liar as president who makes Tricky Dick look like a paragon of truth?

Lying appears not to make any difference, or does it?

Trump's lies have already had an impact on his businesses. He is being sued by numerous contractors for breach of contract for not fulfilling his promises to pay them. No bank in the U.S. will loan his companies money because of his frequent use of bankruptcy laws to avoid paying his debts. Yes, lies do have consequences.

Will the political consequences of lying eventually catch up with Trump? Will anyone in Congress, Republican or Democrat, believe any promise he makes? How can you trust someone who makes promises and deals and then walks away from them?

My advice to anyone tempted to make a deal with Trump is read the fine print and get paid in advance.

Likewise, on the international scene, Trump prides himself as a dealmaker, but will anyone trust his commitments? Deals imply promises on both sides. He has promised to rip up U.S. commitments to both our adversaries and our friends. He has a history of broken promises, why should any country believe him now?

Can our allies or enemies trust him to speak the truth? If he says that Iran is cheating on the nuclear deal, will anyone in Europe believe him? When he lies so often, how can you know when he is telling the truth?

Regaining trust once it has been lost is very difficult. Trump is used to bullying his opponents, but he is no longer in high school. Now he is in the big leagues. Countries can walk away from the negotiating table; countries can punch back. Trump will eventually crash and burn; the tragedy is that he may seriously damage our country in the process.

Trump has proven to be the triumph of personality and image over substance, the kind of reality show that you just can't stop yourself from watching. It would be fun drinking beer with him in a bar, but appalling to discover that your daughter has brought him home for dinner and that he is planning to live in your basement for the next four years.

Jesuit Fr. Thomas Reese is a senior analyst for NCR and author of Inside the Vatican: The Politics and Organization of the Catholic Church. His email address is treesesj@ncronline.org.]