The multiple audiences for the Year of Mercy 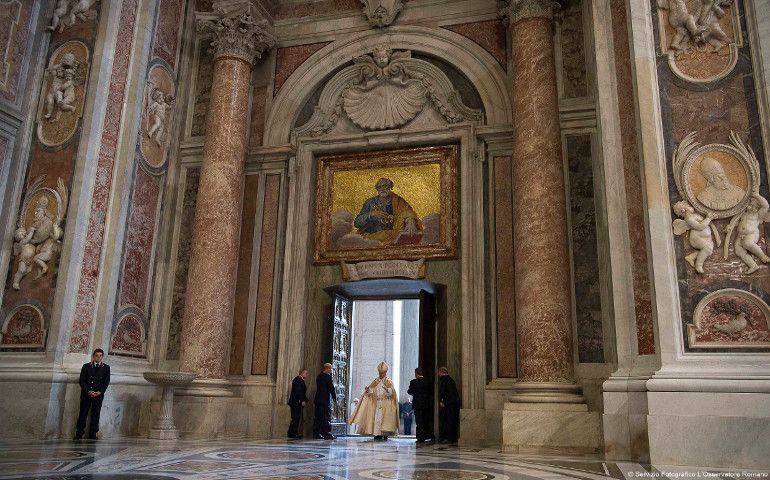 Pope Francis walks through the Holy Door of St. Peter's Basilica to inaugurate the Jubilee Year of Mercy at the Vatican Dec. 8. (CNS/L'Osservatore Romano, handout)
This article appears in the Holy Year of Mercy feature series. View the full series.

From the beginning of his papacy, Pope Francis’ homilies and speeches have emphasized “mercy” as a common theme. As a result, it was no surprise when he declared that the church would celebrate a holy year of mercy this year.

The year of mercy is directed at three audiences: individuals in the church, clergy, and the world.

Every person’s experience of God’s mercy is unique and personal.

When Francis was asked in the famous 2013 interview, “Who is Jorge Mario Bergoglio?” he replied: “I am a sinner. This is the most accurate definition. It is not a figure of speech, a literary genre. I am a sinner.”

He went on to acknowledge that he is “a bit astute,” adaptable, and “a bit naïve,” but “the best summary, the one that comes more from the inside and I feel most true is this: I am a sinner whom the Lord has looked upon.” And, he said, “I always felt my motto, Miserando atque Eligendo [by having mercy and by choosing Him], was very true for me.”

I must admit that while I was very edified by the pope’s response, it is not the answer I would give to this question. My own experience with scruples in my youth does not encourage me to go down the path of dwelling on my sinfulness. Perhaps I am also rejecting the decades of hellfire preaching that saw fear and guilt as the path to redemption.

But the simple fact is that my sheltered upbringing in the 1950s and my entrance into a Jesuit novitiate right out of high school did not provide many opportunities for great sins. I was always jealous of Mary Magdalene and the prodigal son, for as Jesus said of the sinful women in Luke, “many sins have been forgiven; hence, she has shown great love. But the one to whom little is forgiven, loves little.”

As a result, I tended to identify with the older brother rather than the prodigal son in the parable. My sins were less blatant and more insidious. So it took me longer to recognize with Francis, that I was a sinner.

It is also very easy for us in the contemporary world to psychologize away our sinfulness by understanding that we are shaped by our heritage and our environment, which is the way I would describe Original Sin. We can neither take all the credit for our achievements nor all the blame for our failures.

Once I had a better understanding of my sins, I realized they are so deeply imbedded in me that I will never get rid of them. It will be a lifelong struggle which I will not win. At that point, I was finally ready for God’s mercy because I finally had to acknowledge that I could not save myself. “This is who I am God, take it or leave it.” And he took it.

In the year of mercy, we are all called to look into our hearts and recognize our sinfulness and our need for God’s mercy. But this is not a year of sad reflection on our sinfulness, rather it is a year of rejoicing that God’s mercy is gratuitous and overwhelming. Mercy is not earned. It is given.

The second audience for the year of mercy is the clergy.

Francis has insisted that the first words of evangelization must be God’s love and mercy, not a list of rules and regulations. This is the message that people should hear first and most frequently from the clergy, not only during the year of mercy, but always.

During a TV interview, I met a young producer who had been inspired by Francis and her fiancée to give the church a second chance. After going to church for a while, she decided to go to confession. Luckily, her boyfriend warned her that going to confession was like playing Russian roulette. Unluckily, she got the bullet from a priest who chewed her out for avoiding confession for 10 years. He should have simply said, “Welcome home.”

Other than sexual abuse, I think that confessional abuse is the worse sin a priest can commit. Vulnerable people come into the confessional looking for the kind and merciful Jesus, and they get a mean, insensitive ogre.

In the Gospels, Jesus never got mad at sinners. He only got mad at the Pharisees and the Scribes. Francis is the same. He speaks constantly of mercy, but harshly condemns clericalism.

The third audience for the year of mercy is the world.

It is noteworthy that Francis started the year of mercy early in the Central African Republic by opening the holy door in the Bangui cathedral. Francis recognizes that the only path to peace is through mercy, mutual forgiveness, and reconciliation.

Whether it is in our families, our neighborhoods, our nation, or the world, without forgiveness and reconciliation there will be no peace. This appears naïve to those who think every crime must be avenged, every problem has a military solution. But millennia of experience shows that such philosophies simply result in unending fighting and strife.

The year of mercy reminds us that mercy is not only shown by God. It should also be shown by us. We who have experienced mercy must in turn grant it to others.

Jesus made this very clear in the parable of the unforgiving servant (Matthew 18:21-35) who is punished by his master for not forgiving a fellow servant after he himself had been forgiven. “So will my heavenly Father do to you, unless each of you forgives his brother from his heart.”

Mercy, however, does not ignore justice. “True mercy, the mercy God gives to us and teaches us, demands justice, it demands that the poor find the way to be poor no longer,” Francis told Jesuit Refugee Services on Sept. 10, 2013. “It asks us, the church,” he continued, “it asks the institutions — to ensure that no one ever again stand in need of a soup kitchen, of makeshift-lodgings, of a service of legal assistance in order to have his legitimate right recognized to live and to work, to be fully a person.”

The year of mercy has started. Mercy should be part of our DNA as Christians, something we practice 24/7. Francis has raised it up during this year to remind us of its centrality to the Gospel message of Jesus and therefore its need to be central to our lives as Christians.

Parish | The multiple audiences for the Year of Mercy