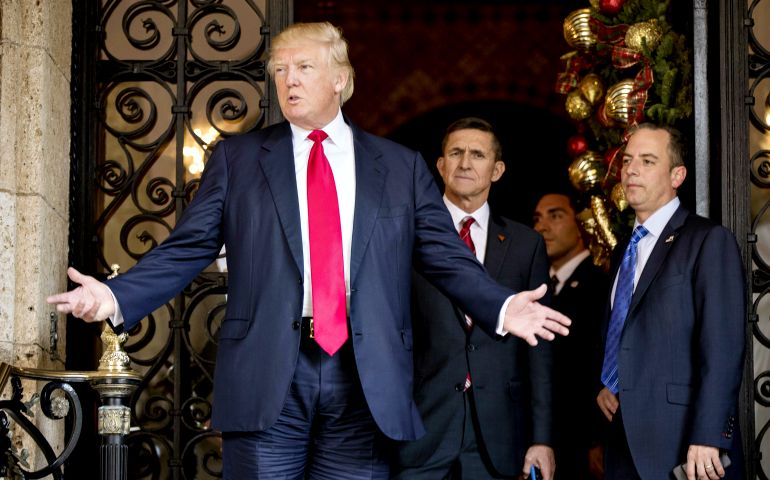 Donald Trump will become the president of the United States on Jan. 20, whether he or the country is ready or not.

Democrats and establishment Republicans are responding to the election of Trump in the same way that people respond to death: denial, anger, bargaining, depression and acceptance.

Most Republicans have made their way to bargaining and acceptance. They have accepted Trump as their president and they are bargaining to retain as many of their traditional Republican policies as possible. Democrats, on the other hand, are responding with anger and depression. Their anger is directed at their leaders and voters, and they are depressed because they don't know what to do next.

The greatest fear of both Democrats and Republicans working inside the beltway is that although Trump proved to be a formidable campaigner, he is simply not up to the job of president. His unnuanced Twitter blasts reveal a temperament that many find scary. Is this a case of attention deficit disorder or does he truly believe he can understand and solve any problem in five minutes? His disregard for facts may be a good campaign strategy, but for a policymaker, it could prove disastrous. Is he incapable of changing his views when presented with facts or is he simply a serial liar?

It is the uncertainty that many find most disconcerting. If any of the other Republican candidates had been elected, we would be pretty clear on what they would do. With Trump, no one knows. He makes clear and definitive statements, like he is going to deport all undocumented immigrants, and then changes his tune to deporting only criminal aliens, the same policy as the Obama administration.

Uncertainty is heightened by Trump's making outrageous statements that are later qualified by his staff.

Trump defenders say that his over-the-top statements are simply his way of negotiating, but too often the impression is that he is learning on the fly about complex topics about which he is woefully uninformed. Or does he simply believe whatever the last person said to him?

All of this is a recipe for chaos.

The business community hates uncertainty and may become hesitant about making investments if it does not know whether trade agreements are going to trashed or sustained. Threats of a trade war are scaring American exporters.

For example, some experts are predicting that if Trump imposes tariffs on Chinese exports, China could easily respond by putting tariffs on agricultural imports from Iowa and Ohio, two states important in presidential politics. American farmers, who traditionally vote Republican, have benefited tremendously from globalization. Anything that threatens their financial well-being would certainly get the attention of the Republican establishment.

Meanwhile, our allies in Europe will not know how to respond to Trump statements and tweets. Should they take them seriously and literally or should they wait for staff clarification? How do you follow a leader who is so erratic? Will they stand paralyzed without American leadership or will they find a new leader in Europe? Whatever the case, it is unlikely that they will commit their soldiers to any military adventure Trump decides to take on. If Trump goes to war, America may be on its own.

So, one possible scenario for the Trump administration is simple chaos, which would allow the Democrats to simply sit back and let his administration unravel.

But the structures of government will force some order out of this chaos. For example, he has to submit a budget where rhetoric has to give way to specific decisions. And if he wants Congress to do anything, he must submit legislative language, which is open to examination and debate. Laws have to be carefully crafted to be clear about what you are doing. These governmental structures will force Trump to move from the grandiose to the particular. The real Trump will then be revealed.

The Republican establishment also hopes that his White House chief of staff, Reince Priebus, will bring order to his administration. Priebus was chair of the Republican National Committee. You cannot get more establishment than that.

And then there is his cabinet, many of whom are strong personalities.

To whom will Trump listen? Who can speak for him with authority to Congress and the media? Who is going to keep everyone in line?

Trump defenders argue that all of this is part of an ingenious strategy to allow Trump to get the best advice from various sources while laying out a negotiating position.

But what happens if, with regards to Trump, "what you see is what you get"? What if he is incapable of becoming a disciplined, focused president?

One solution would be for members of his administration to take the initiative and do the hard work of policy development. Bringing their results to the president, they would tell him that their proposals implement all that he wants to do, even if it does not, knowing that he will not read it. While he does his media thing, the administration officials work out the details with the Republican Congress.

The Republican establishment is hoping that either Trump appointees or the Republican Congress will be the real engine of policy during the Trump presidency while Trump provides media cover for their traditional Republican policies of tax cuts, deregulation, military spending, and domestic budget cuts.

This scenario presumes that Trump can be controlled (especially on issues like trade and Russia), but the Republican establishment's record on controlling Trump is abysmal. Thus, the possibility of chaos is ever present.

All of this could be another example of underestimating Trump. Other presidents have surprised their critics by doing the unexpected — for example, Richard Nixon going to China and Ronald Reagan making a nuclear weapons deal with the Soviet Union.

Could Trump's much-talked-about relationship with Russian President Vladimir Putin lead to another nuclear arms deal, further reducing the number of nuclear weapons? Such a deal would be good for both countries and prove that Trump truly is a dealmaker.

Even more surprising would be Trump's following through in his attacks on the Washington establishment, Wall Street and big banks.

In a Q&A during a Vatican conference on poverty, Bannon derided "crony capitalism" in Washington. Bannon is no liberal folk hero, but his views of the current state of capitalism could have come out of the Bernie Sanders playbook. He calls it "a brutal form of capitalism that is really about creating wealth and creating value for a very small subset of people." These people "feel that they have a different set of rules of how they're going to comport themselves and how they're going to run things."

He complained that no bank executives were prosecuted over the financial crisis. "All the upside goes to the hedge funds and the investment bank, and to the crony capitalist with stock increases and bonus increases," he said. "And their downside is limited, because middle-class people are going to come and bail them out with tax dollars."

Bannon also condemned libertarian capitalism as preached by Ayn Rand, the high priestess of Ryan and his ilk. "It is a capitalism that really looks to make people commodities, and to objectify people, and to use them," he said.

Will liberals continue to focus on Bannon's controversial views on race and gender, or will they be willing to work with him on reforming capitalism? For example, could a Trump administration bring back Glass-Steagall, which prohibits banks from engaging in high-risk investments, as promised by the Republican platform?

Anyone who thinks they know what the Trump administration will do is bound to be confounded. Trump has surprised pundits and experts so often that you would think they would be humbled. We may see a mix of chaos and achievements as Trump continues to go his merry way, impervious to media attacks. Or he may finally crash and burn. Whatever the case, here he comes, ready or not.

Politics | Trump: Here he comes, ready or not

Biden has won big on infrastructure; now he needs to sell it