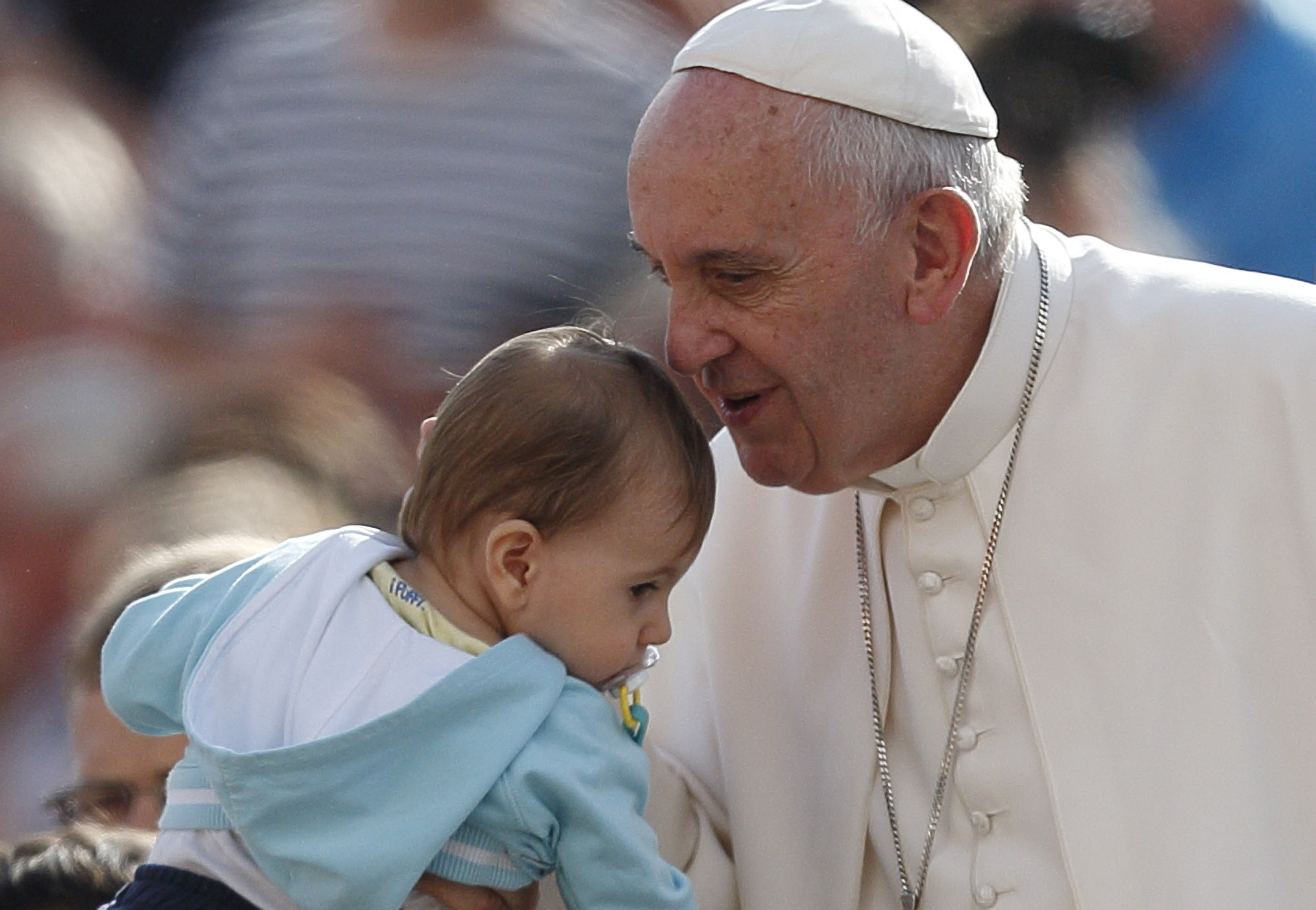 Pope Francis greets a baby during his general audience in St. Peter's Square at the Vatican Oct. 7. The pope said that when families mirror God's love for all, they teach the church how it should relate to all people. (CNS/Paul Haring)

Society and the church have much to learn from the family and, in fact, the bond between the church and the family is "indissoluble," Pope Francis said.

Families bring needed values and a humanizing spirit to society and, when they mirror God's love for all, they teach the church how it should relate to all people, including the "imperfect," the pope said Oct. 7 during his weekly general audience.

While members of the Synod of Bishops on the family were meeting in small groups, Pope Francis held his audience with an estimated 30,000 people in St. Peter's Square. He asked them to accompany the synod with their prayers.

While the Catholic Church insists that governments and the economy need families and have an obligation to give them greater support, Pope Francis said, the church itself recognizes that it, too, must have a "family spirit."

Using the Gospel story of Jesus telling the disciples he would make them "fishers of men," Pope Francis said, "a new kind of net is needed for this. We can say that today families are the most important net for the mission of Peter and the church."

"It is not a net that imprisons," he said. "On the contrary, it frees people from the polluted waters of abandonment and indifference that drown many human beings in the sea of solitude."

Families are the place where individuals learn that they are "sons and daughters, not slaves or foreigners or just a number on an identity card," the pope said. "The church must be the family of God."

Pope Francis asked people to join him in praying that "the enthusiasm of the synod fathers, animated by the Holy Spirit, would energize the impulse of the church to abandon its old nets and start fishing again, trusting in the word of its Lord. Let us pray intensely for this!"

"Christ promised -- and this comforts us -- that even bad fathers do not refuse to give bread to their hungry children, so it is impossible that God would not give the Spirit to those who -- even imperfect as they are -- ask with passionate insistence," he said.

The world itself needs "a robust injection of family spirit," he said. Even the best organized economic, juridical and professional relationships are "dehydrated" and anonymous without concern for people, especially for the weakest members of society.

Family ties, the pope said, teach individuals and society the value of "bonds of fidelity, sincerity, trust, cooperation, respect; they encourage people to work toward a world that is livable and to believe in relationships even in difficult situations; they teach people to honor their word."