'Francis' takes on a new adviser 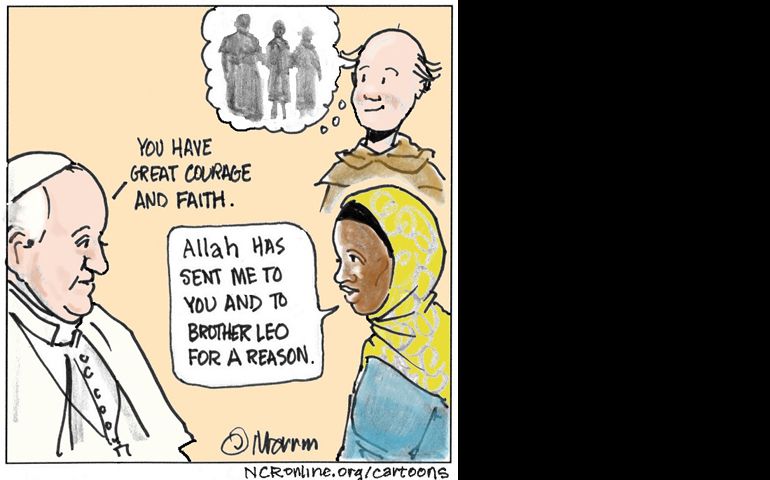 This article appears in the Francis the comic strip feature series. View the full series.

Editor's Note: The new character in "Francis" the comic strip was introduced in an eight-part series over the last week.You might want to review the strip before reading the creator's thoughts below. Follow this link, and remember to scroll to the bottom of the page to get the first strip.

Comic strips are meant to be simple. But unless you are "Ziggy," a strip that has survived since 1968 with just one character (plus a menagerie of pets), getting fresh ideas can be challenging.

"Francis" the comic strip began with the encouragement of then NCR publisher Tom Fox shortly after Pope Francis was elected in 2013. After an initial rush of themes focused on the pope's humility, I realized that he needed a personal assistant. Brother Leo, a nod to an actual companion of St. Francis when he founded the Friars Minor ("Little Brothers") served as a foil and reflector of the pope's values.

Leo helped keep the strip light, and he soon surpassed Francis in popularity for his innocence and his often literal take on the pope's reforms. Leo also complicated the papal household by bringing home pets, including a homeless, pregnant beagle he named Dogma. This carried the strip though several months and 12 puppies named after the Apostles, though half of them were females.

But, like Adam in the garden, even with the pope and his assistant, there was obviously something missing from the strip. Another character was needed to open the strip to important issues facing the real church.

"It has to be a woman," insisted Sr. Jan Cebula, a Franciscan who works at NCR with Global Sisters Report. My wife, Diane, who sees every comic in progress, also wondered aloud when I was going to get with it and take on one of most glaring issues confronting Francis as he tries to pull the Catholic church into the modern world.

A shrouded figure crouching near the Vatican colonnade, whom Francis once called a "pillar of the church," has been hiding in the strip all along. Gabriella, a young Muslim woman trafficked from Somalia to Rome, who escaped her captors and lived as a beggar on the streets until Brother Leo was inspired to bring her home to the pope, is our new character. These eight strips, an extravagant gift to me and to you from NCR editor Dennis Coday, introduce her all at once. Online readers will discover her over the next four weeks.

I invite you to continue to collaborate with me as "Francis" evolves. A small trinity of characters now offers us their humor and their hope.

[Pat Marrin is editor of Celebration and the creator of the "Francis."]

Easter Sunday: Putting on the mind of Christ

Easter reflection: Listen to Him