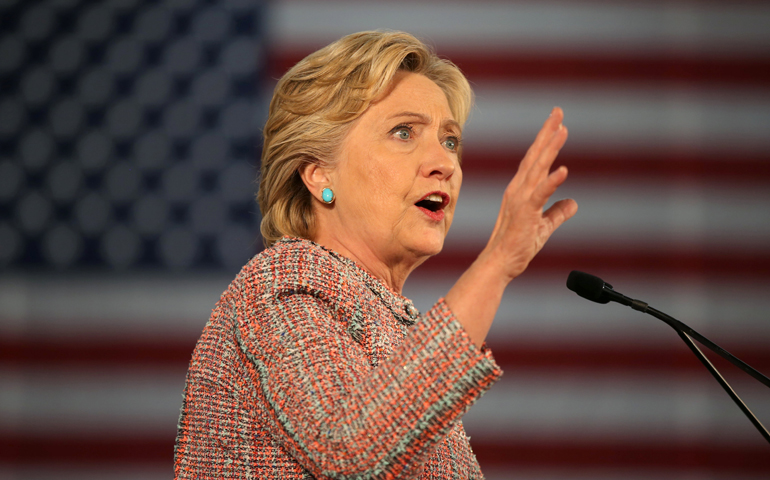 On the first evening of the Democratic National Convention, the team at the "PBS NewsHour" kicked-off its coverage with group interview of Robby Mook, Hillary Clinton's campaign manager.

"Could you give us an anecdote or two," Brooks asked, "of her being nurturing, kind, surprising to the public image?" Brooks chuckled as he said the word "kind."

In the three months since the convention, in a campaign that has offered one stunning double standard after the next, it almost goes without saying that no journalist would ever think to question a male candidate's capacity to be "nurturing" or "kind."

But by using such maternal adjectives, Brooks inadvertently revealed one of the key reasons, I believe, that so many still insist that Hillary is unlikable: she just doesn't come across as a mother figure.

These figures are especially disturbing since, in addition to his volatility, his use of racist, xenophobic and sexually predatory language, his limited ability to articulate sentences, and the fact that he is radically unqualified for the job of president of the United States, Trump's behavior and beliefs hardly reflect Christian or Catholic values.

So what, then, could be the tie that binds Catholic men, and evangelical men and women, to Trump? The answer, I believe, lies in Catholic and evangelical understanding of the role of women.

Catholic teaching, particularly in John Paul II's Theology of the Body, makes clear that men and women have different, but supposedly complementary, purposes. Men are leaders, women are nurturers; men are actors, women are receivers. Even the writings of Pope Francis routinely reinforce that a woman's highest purpose is the birthing and mothering of children.

Though Catholic women in the U.S. have largely rejected the church's teaching on women and gender roles, many Catholic men, unaware of the depths of their privilege in the church and society, have been slower to reject these teachings.

Catholic teaching on gender roles does resonate deeply with evangelicals and conservative Catholics, who strongly object to feminism and feminist ideas about women's equality, and who regularly exalt women's primary identity as mothers and caretakers.

Looking at Clinton's sometimes-fraught history with the media, one could almost pinpoint the origin of her so-called unlikeability to that fateful moment in 1992 when a reporter from ABC's "Nightline" asked her why she chose to continue practicing law after her husband was elected governor of Arkansas.

"You know, I suppose I could have stayed home and baked cookies and had teas," Clinton explained, "but what I decided to do was to fulfill my profession, which I entered before my husband was in public life."

Her response was quickly interpreted as a disparagement of stay-at-home moms.

And regardless of what Clinton would accomplish on behalf of children and families in the years since, she would be branded as a cold, calculating, ambitious and inhuman creature who eschews what many of us have been taught to believe is a woman's greatest vocation in life: to be a mother, a nurturer, a homemaker.

Sure, some argue that they don't like Hillary because of Benghazi, or her misuse of an email server, or the Clinton Foundation's alleged practices. "She is corrupt" and "she is a liar" are two frequent refrains. But the truth of the matter is, as The New Yorker recently stated:

Clinton is distrusted in ways that have little to do with her own choices, beyond the choice to be part of public life. She has been the target of twenty-five years of hatred, misogyny, and conspiracy-mongering, endlessly metamorphosing from one confected "scandal" to another.

The dislike of Hillary has always been far more personal than professional. This is made clear in the criticisms regularly lobbed at her, all of which could probably be divided into two categories: supernatural and unnatural.

The "supernatural" attacks are most obvious in Trump's likening her to the devil and declaring that she has hatred in her heart. His supporters' chants of "lock her up" evoke the frenzied malice of angry mob at a witch trial. Campaign slogans demand that this diabolical woman be taken down, or even taken out: "Hillary for prison"; "Trump that bitch"; "Kill the bitch of Benghazi."

She's often called "the lesser of two evils," though no one ever seems to account for what precisely she has done to achieve such a cosmic level of darkness.

The "unnatural" criticisms can be more subtle, but they are plentiful: "I just don't like her"; "she can't connect with people"; "she is unrelatable"; "she is robotic."

Whether metaphysical or personal, all of these potshots aimed at Clinton ultimately say the same thing: she just doesn't feel like a natural woman. She's not the kindly, nurturing mom that she, by the very fact of her gender, ought to be.

Even some of those who support Clinton feel compelled to name their unease and distrust of her. It's not uncommon to hear people, who are otherwise progressive and reasonable, say, "She's far from perfect," or "She just doesn't seem nice," or "I just can't get excited about voting for her."

Such reactions are visceral, not substantive. They are qualifiers that are never applied to male candidates. Indeed, they sound much more like the grumbles of a petulant child, than the mature, informed assessment of a presidential candidate.

Since she first came into the public eye during her husband's presidential campaign, Clinton has been challenging traditional gender roles, and now she is bidding for the most powerful job in the world. If she becomes president, she will become a global symbol of women's equality.

As I wrote in my column back in August, Catholic women who seek equal roles in the church through priesthood are treated with deep suspicion. They are condemned by the hierarchy for acting against the natural order and are often criticized, by both men and women alike, for being controlling, power-hungry and ambitious.

Last week, NCR's Tom Reese wrote, "the white Catholic vote has proven to be one that has been most in play during this election. Where they finally land could determine the election."

Election Day, in some ways, promises to be a day of reckoning. As Catholics go to the polls, they, too, must reckon with the ways in which their inculcated understandings of women and traditional gender roles might be contributing to their dislike of Clinton.

As Catholics, we have been so schooled in the veneration of the perfect mother that it may be hard to discern the depths to which the image of the fantasy maternal figure is distorting our perception of the first woman who could become our president.

By obsessing over Clinton's personality traits, rather than focusing on the abilities and experience she would bring to the presidency, are we participating in the infantilizing Catholic idea that women should be judged based on their capacity to nurture and be kind? How can we stop perpetuating a culture where a woman's value is determined by how motherly we perceive her to be?

Hillary Clinton wants to be president of the United States, not your mother. She is the most qualified, capable and experienced candidate to run for this office in generations. The only person she needed to mother was her daughter, Chelsea, and she has done a fine job of that.

Hillary Clinton is not an unnatural woman. What is unnatural is the obstruction of women's talents and abilities from all forms of leadership, which for millennia has stunted the growth of untold communities, religious groups, and nations. We have seen the damage that the restrictions on women have done to our own church. Let's not allow the most dangerous presidential candidate in U.S. history to become leader of the free world simply because we cannot discern, like mature adults, the best choice for our country's future.